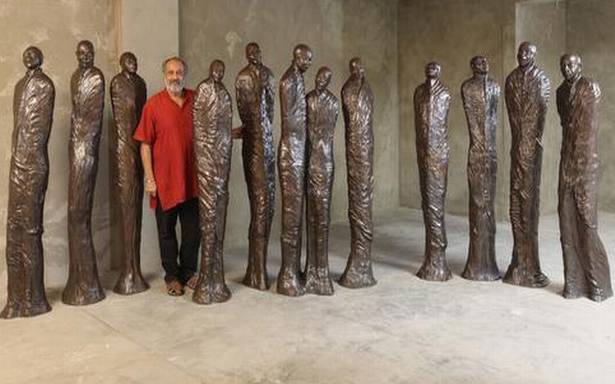 Shakti Maira, who passed away in Delhi, lived a full life of an artist, writer, and thinker

Artist, philosopher, sculptor and writer Shakti Maira, 74, who died in Delhi left behind a multifaceted legacy. Maira saw himself as a realist, who explored and expressed the tangible. His observers saw a deep spiritual passion in his work, a Buddhism-inspired one. He will live on through his works that are at the National Gallery of Modern Art and private collections around the world. Through numerous exhibitions, talks, and writings, Maira took his work and ideas to audiences across the globe.“To integrate spirit and matter in an aesthetic presentation that opens the viewer to an integral moment is remarkable enough. But what is truly astonishing about Shakti’s work is the depth to which that intention is realised,” American philosopher Ken Wilber had said about him after their time together at Wilber’s Integral Institute in the late 1990s.When he was painting the Fallen Gods and Intimations of Transcendence series, Maira went beyond two-dimensionality and expressed himself via sculpture. His first sculptural series Sunyatta (1989) was made simply of papier mache and copper from discarded parts he had found in a junkyard near where he lived in New Hampshire at the time. “I am actually surprised that many more painters don’t sculpt…. Working three dimensionally has helped me understand form and made my drawings and paintings more perceptive, more spatial,” he had said in a 2017 interview with The Citizen. Since that first series, Shakti worked with multiple other mediums including stoneware in the Silent Witnesses (1995) series, bronze in the Intimations of Transcendence (1992), Sangha (2012), and Seekers (2010) series, as well as wood in the Formed Resonance (2016) series. “With paintings and sculpture I am able to go much deeper into the sensory and tactile world, and the emotional world, and the world where the conscious mind meets the subconscious mind. I am able to journey into a world of delight, and into the many dimensions where perception and understanding are wordless, and exist in different relationships and continuities,” he had said. Returning to India in 2001 after more than two decades in the US, he added writing to his toolkit of creative expression, his pieces appearing in The Hindu regularly. It was a response to the situation, he said later. “I felt compelled to write…. It seemed that contemporary art was lurching imitatively into western art constructs that had little relevance, and simultaneously the broader and integrative art traditions of India were being abandoned thoughtlessly,” he wrote, on his website.Maira also wrote two books: Towards Ananda: Rethinking Indian Arts and Aesthetics and The Promise of Beauty & Why it Matters.

Artist and architect Meera Chandran makes her face the canvas for her social messages
Making art with Rubik’s Cubes
To Top
error: Content is protected !!
Top