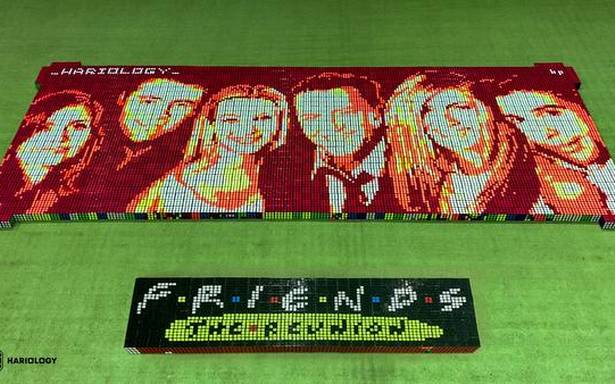 A large portrait of the characters of Friends made using 2,021 Rubik’s Cubes is on show at the Loongs Cricket Academy in Thrissur. The artist, Hariprasad CM, created the mosaic in less than 20 hours to coincide with the première of Friends: The Reunion, a special episode of the popular American sitcom on May 27. The video he uploaded on his Instagram page (@_hariology_), has already got close to 6,000 views. “Ever since they announced the reunion, I have been wanting to do this. I have watched Friends multiple times; it is my ultimate go-to,” says Hari, who is a cuber, artist and teacher.He got his first Rubik’s Cube in 1996, at the age of six, but solved it only in 2010, after he sat with it an entire night. Since then, there has been no looking back. He solved cube after cube, and got more hooked on to it each time. “It ceased to be a mere hobby. I began taking it seriously and started teaching others,” he says.A research associate working in the Department of Mechanical Engineering at Amrita University, Kollam, Hari holds a few records in cubing. But it is the artistry more than the algorithm that draws him to it. “I take about 20 seconds to solve a cube, but there are so many who can solve it in less than 10 seconds. The world record for solving a 3×3 (the most commonly used Rubik’s Cube) is 3.47 seconds.” Speedcubing is fun, but Hari enjoys the process of cubing more, exploring its endless creative possibilities.He made his first Rubik’s Cube portrait of Mata Amritanandamayi using 600 cubes in 2020 and later made a 3D portrait of Mahatma Gandhi using 547 cubes, which won a World Records India title of being the first of its kind in India. According to Hari, his portrait of APJ Abdul Kalam, in Bengaluru, is the largest 3D Rubik’s Cube portrait made in Asia. “The 3D portrait was challenging. The cubes were stacked in three different planes and had to be looked at from a specific angle in order to give it an appearance without distortion,” he says.The tech of itHari has collaborated with a friend in the US to build a software to help him make his cube portraits. Before he gets started on a portrait, he takes a photograph of the subject and puts it on Photoshop. The image is then broken down into pixels and re-coloured to suit the colours on the Rubik’s Cube. “This is how the designing is done. It may seem very complex, but once you have cracked the code, it is pretty simple,” says Hari. He usually gets his portraits right in a single attempt. “When re-creating facial features, one has to be careful. A small error can make it look like a pimple or a mole,” he underlines.Hari organised the first cubing competition recognised by the World Cube Association (a US-based non-profit organisation that holds competitions for twisty puzzles) in Kerala at Amrita University, while he was still a student there in 2012. The Amrita Cube Championship has been held almost every year since.Lesson in patienceHari wants to break the myths surrounding cubing. “People say that only geniuses can solve a Rubik’s Cube or that you need a mathematical brain for it. You can definitely learn it using formulas, but I say, if you have an hour to sit down with the cube, play around with it and explore it, you will be able to solve it.” His youngest student is three-and-a-half years old and his oldest is 91. “I taught my 74-year-old dad to solve a cube and the 91-year-old-student is my grandmother. She hasn’t solved it yet, but she is getting there,” he adds.Hari is building his brand, Hariology, through which he aims to spread the joys of cubing to more people. Children could benefit greatly from learning to solve the Rubilk’s Cube. “Children love it. They are attracted to the six bright colours so messed up. They start recognising patterns and it improves cognition and concentration. It helps improve hand-eye coordination and muscle memory. It could also influence a child’s problem solving abilities. Especially, in these times, the good old fashioned Rubik’s Cube would be a great way to lure children away from the screens,” says Hari.

A tribute to artist-sculptor-writer Shakti Maira
Speaking up with internet art
To Top
error: Content is protected !!
Top