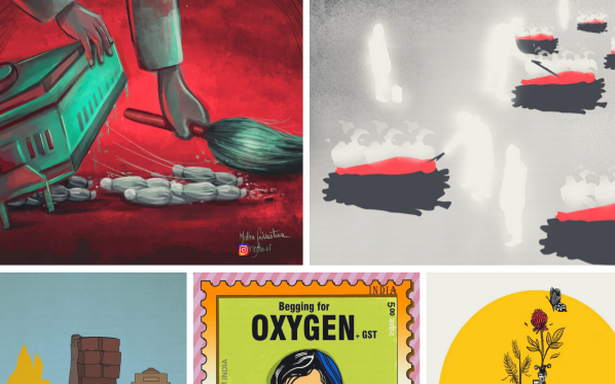 From cartoons to digital art, India’s young are expressing their anger and anguish on social media — and are finding resonance

On April 28, Medha Srivastava, a Mumbai-based concept artist, posted a work on Instagram — Prime Minister Narendra Modi, blinkered by smartphones and surrounded by burning pyres. The likes were instant, and the hate messages expected. What caught her by surprise, however, was Member of Parliament Shashi Tharoor picking it up the very next day and sharing it on his social media, multiplying its reach.“I was worried that it would place me in the bull’s-eye,” she laughs, before adding, “but I am not afraid to show the reality.” That of a country buckling under the ravages of a virus while those in power spectacularly fail the electorate. “At a time like this, art [helps people] take cognisance of what’s going down around them and mobilises them into speaking up,” the 30-year-old tells The Hindu Weekend.

The impact makersEven a few years ago, the Instagram feed of a typical millennial or Gen Z wouldn’t have thrown up too many surprises. Today, however, you will see social commentary side by side with selfies. People like Srivastava are part of a growing tribe of youngsters who are expressing their mounting sense of anger, helplessness and frustration through images rather than words. Playing witnessOrijit Sen is a name many youngsters quote when asked who inspires them, alongside names such as Rachita Taneja of Sanitary Panels and Rohan Chakravarty of Green Humour. And he is appreciative of the work that’s being created by these non traditional artists. “They may not be artists in the sense of people who function within the art world scene, but they are artists [graphic designers, or working with mediums like videos and music] who are using their tools to make political statements. Art is a witness of the times and they are playing a strong role in capturing these signs — protesting, recording, documenting,” he says. Meanwhile, Sen himself has not shied away from posting his thoughts on social media. “My work comes from a space of anger, frustration and despair. If I don’t process it in some creative way, it eats me up,” says the Goa-based graphic artist. “The impulse comes from a very personal space, but I put it out there because I hope I am able to provide the people who share it a voice, too.”Many aren’t trained artists, and almost all of them have day jobs. But outside of office hours, marketing executives are sketching about the oxygen crisis, and fashion designers and bloggers are depicting our struggles with mental health issues amidst a pandemic.“Art such as this is essential,” feels Ranjit Hoskote, curator, art critic and cultural theorist. “These are very important tactical responses and are like the posters of the previous generation, but with more sophistication and different forms of dissemination.”While traditional artists may take time to assimilate, research and distil their feelings into art, the ‘social media artist’ is like a first responder. “It’s immediate reaction,” says Siddhesh Gautam, a Delhi-based artist and graphic designer, who is part of the Dalit movement. “They are very fast, and I feel the younger generation is somehow very empathetic. I have hope that these people — who are working in corporate offices, but come home to put down their thoughts about what is happening locally and globally — will be able to capture attention and inspire more people to express themselves.”

Skip the labelsWe started noticing this phenomenon during the anti-CAA (Citizenship Amendment Act) protests and the more recent farmers’ protests. Remember Tamil actor Ponvannan’s depiction of 22-year-old Aysha Renna, the student who stood up to the police, which went viral in December 2019? Today, the art itself is getting more layered, incorporating multiple mediums. Think short animations highlighting reportage of death and a healthcare system in shambles; cartoon strips spotlighting political failings; paintings using pop culture to underline the current social scenario.Some call it protest art, others expressionism. But do we need a tag? “There’s been no continuous thread of anything like protest art in India,” says Hoskote. “In particular moments in our history there have been artists who produced work that had a wider resonance in resistance. The best example is the artists affiliated to the Communist Party who went to Bengal during the famine in the early 1940s, such as Chittaprosad, or Sunil Janah the photographer.” The images that we are seeing on social media now, however, are coming from regular people, which is a “great thing” because it resonates. “But I’m not in a hurry, however, to call it protest art. I think it’s part of a larger form of popular articulation of anger and outrage. And it is being done very, very effectively.”Here’s a selection of the art that we are seeing right now on social media.

Medha Srivastava@medha.viMumbai-based Srivastava’s family has “strong and various political views”, so she’s never shied away from speaking her mind. “From an early age, I’ve been making art on social issues. I love art that has a voice,” says the former game artist, who follows the likes of Kashmiri political cartoonist Mir Suhail Qadri and creates on Adobe Photoshop and Procreate. Her own work — which has covered everything from mental health, the Bengal polls, the oxygen crisis and the price of greed in the midst of the pandemic — has been widely appreciated.

Siddhesh Gautam@bakeryprasadGautam uploads artwork to his ’gram frequently. Today, it’s on Palestine, yesterday it was on political prisoners, and the day before on Covid-19 (Bricks and Pyres) — an artwork inspired by Salvador Dali’s painting, La Desintegración de la Persistencia de la Memoria. “The medium [social media] is democratic and fast, and reactions come in just a few minutes,” says the artist, who keeps up with tools like Procreate to make art in under three hours. His work around the pandemic, especially Bricks and Pyres, and one that juxtaposes Karl Marx’ birth anniversary, the construction of Central Vista and its Dalit workers have been widely liked and shared.

Sankalpa Raychaudhury@sankie.ssThe 24-year-old from Guwahati is inspired by artists like Orijit Sen and Suhail Naqshbandi, but is learning to give her work a distinct identity. “I am not good at satirical humour, so I turned to what I know best — literature and visual mediums like cinema,” she says, of her work that draws parallels between titular characters in movies and literary texts and “spins” them to fit current contexts. “Right now I’m working on one that is inspired by the painting of Ophelia by British artist John Everett Millais, to portray the dumping of dead bodies in the Ganges.”

Siddharth Samant@that_sidartguyIn April, Samant and his mum tested positive. As he was recovering, balancing the weakness within and the negativity without, he decided to create work that spotlighted Covid-19 but wasn’t all doom and gloom. “The inspiration for the ‘rooted’ oxygen cylinders came after searching for leads for a friend,” he says, adding that he didn’t create any of his art for the sake of reactions. However, the positive responses he’s been getting has been heartening. The “absurd” oximeter as a dog is a favourite, while the one on the vaccine (portrayed as gun carried by a soldier) has been viewed over 50,000 times.

Sanket Deshmukh @thecreativecubA senior business analyst based in Boston, Deshmukh has been doing digital art for two years. But the second wave had him moving from pop culture to more hard-hitting imagery. “It was twofold: worrying about my family back home in Nagpur, and seeing the country fail in front of my eyes. This was my way of telling the government, you have to up your game. You promised us a lot of things and you haven’t delivered on any of it,” says the 29-year-old.

Lejo Varghese@i.m.lejo“All the negative news was affecting my mental health and I really wanted to get it out of my system,” says the 22-year-old, freshly-minted mechanical engineer, who vented through a short animation. “In the news, we only see numbers — this many affected, or this many died. I wanted to show that each of those numbers was a life, with a whole family behind it.” Though he started off with clips from news articles, he quickly moved to animation, sketching on a Wacom tablet and finishing it on Photoshop, to give it a more personal feel.

Param Sahib@parambanana“My art reflects the times. And with visuals you can express so much and move people,” says the designer and artist. Incorporating his signature pop colours, the imagery is thought provoking. His latest, on mental health, comes from a very personal space. “As a young designer, I am questioning my future right now, with respect to my mental health and how I will survive as an entrepreneur. Through conversations, DMs and comments I realised all of us are in the same boat — worrying about how we will get back on our feet,” says Sahib, 30. When he posted the artwork, he also asked organisations working in mental health to tag themselves. He is now compiling a database, with details on services and sessions, which he will share soon.

Mahafuj Ali@mali.aaliLast year, when the coronavirus entered our lives, Ali had started a series on why it’s okay to laugh during a pandemic — a comic take on how not to touch your face, for instance — because “I wanted to dispel the fear that was everywhere”. But in 2021, as the situation worsened, his imagery became darker. “I moved to Newcastle [Australia] a couple of years ago, and I was able to compare the steps taken by the two governments to tackle Covid-19. When we went into a precautionary lockdown because just one case was detected [after 40 days of none], Modi was exclaiming how happy he was to see ‘huge crowds of people’ at his election rally,” says the landscape architect, adding that such actions need to be called out.“The larger ecology of art making can address the act of protest, and it doesn’t have to be in the image itself. And by that I mean protest doesn’t have to be consumable, or accommodated in an Instagram post. Moreover, artists, whether established or not, are expressing themselves in many ways which are not always visible to us,” says Sree Banerjee Goswami, director of Mumbai-based gallery, Project 88, who showcases young, innovative artists “Today, it’s not a question of protest art coming of age, but of having more avenues for people to express themselves. [Going beyond the pandemic] there’s so much protest art online by marginalised groups that, earlier, did not have access to expressing their feelings or their valid anger. Like Siddhesh Gautam — a lot of the commentary he shares makes you look at your own caste blindness. I think that aspect of protest art is exciting,” says Priya Kuriyan, illustrator, also known for her social commentary on Instagram