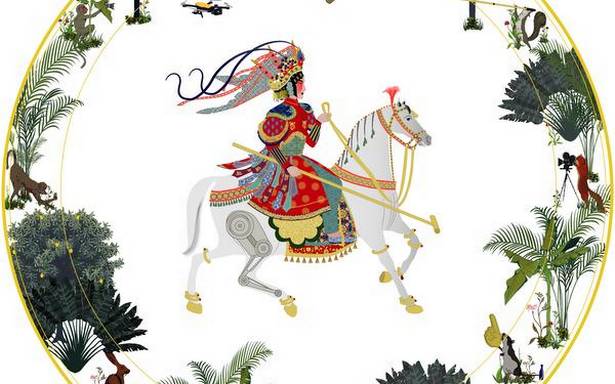 Marriott Bonvoy, the travel programme of hotel chain Marriott International, is spearheading the project to spotlight the region as an arts and culture destination, in collaboration with charitable organisation, The Plated Project

Neon signs and mah-jongg tiles, surreal three-eyed birds, and foxes wielding movie cameras. You’ll spot these and more on four art plates designed by fashion designer Suket Dhir, Pakistani-American contemporary artist Anila Agha, architect and illustrator Sahiba Madan, and mural artist INSANE 51 respectively. The designers have brought their unique perspectives to ‘A Memory of the Future’, a series of artworks to be showcased at the hybrid Art Basel Hong Kong 2021.

Marriott Bonvoy, the travel programme of hotel chain Marriott International, is spearheading the project to spotlight the region as an arts and culture destination. It is being done in collaboration with The Plated Project, a charitable organisation that works with artists to create limited-edition plates (proceeds of sales are used for charity).“[Art Basel] Hong Kong is working on promoting traditions, specifically Cantonese Opera [which involves music, singing, martial arts, acrobatics and acting],” says Dhir, adding that his clothes and prints feature a huge element of art because “they have a narrative and a story to tell”.

Dhir’s plate, titled Cantonese Opera, features a warrior on a horse with a bionic leg, surrounded by different wild animals, each documenting the scene. A squirrel holds a boom mike, a panther operates the spotlight. “I was thinking about playfulness, and experiencing life through these creatures who are our co-inhabitants on the planet. The concept was ‘A Memory of the Future’, so the idea was to do a sort of coming together of the past and the future — looking at a beautiful world where animals and humans coexist,” he says.Explaining how he watched a lot of theatre to research the traditional art form, he says, “The warrior is a quintessential role, but usually played by a man in Cantonese Opera. Here, I’ve given the role to a woman. That’s also looking at how the future is, how [traditional] roles are now kind of dissolving; there aren’t men’s roles or women’s roles, but people’s roles.”

A Memory of the Future will be available to view at Art Basel VIP Online Preview from May 19 to 21, after which it will be open to the public. Madan’s plate focusses on mah-jongg tiles, while Agha’s is on handmade stencils, and INSANE 51’s, titled Neon Signs, reflects the city at night. [Details: artbasel.com]. The plates will be available for purchase at seven Marriott hotels in Hong Kong. Approx USD 250-300 for a set of four plates. Marriott International will also donate 10 sets of plates to The Plated Project, to be available for sale on its website, theplatedproject.com. The proceeds will go towards Covid relief work to online donation and fundraising platform GiveIndia.

Speaking up with internet art
‘Farmers are frontline workers’: Artist Pradosh Swain’s works on the role of farmers
To Top
error: Content is protected !!
Top