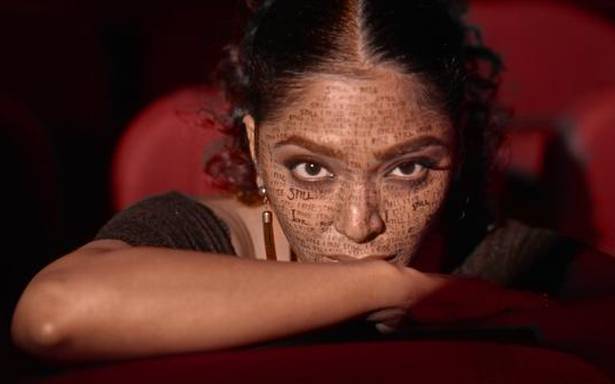 Rima talks about experimenting with music, make-up, costume, space and movement in her productions

Rima Kallingal swirls, swings and dips seamlessly, every movement in step with Maya Angelou’s evocative poem ‘And Still I Rise’. Based on the poet’s own powerful rendition of the verses, actor-dancer Rima’s new choreography ‘Rise’ is a piece that symbolises resilience, hope and faith. Premièred on May 12 on YouTube, Rima says the choreography attempts to capture the indomitable spirit of the poem.“Ever since I first saw the video of the poet reciting it, I must have watched it innumerable times and each time I felt invigorated. A reason why I decided to take it up for choreography during this challenging period. I hope those who watch my video feel the same way,” says Rima.

Directed and co-choreographed by Pratheesh Ramdas, ‘Rise’ is filmed by Jees John and has music by sound engineer Lami. With her face painted with lines from the poem (by face artist Meera Chandran), Rima’s expressive eyes convey the essence of the lyrics — of courage in the face of defeat, of deprivation and chauvinism. “The idea of ‘Rise’ came from the way the poet reaches out to the huge audience with her attitude and style of recitation. When I wanted to create something during the lockdown, this came to my mind instantly,” says Rima.

By experimenting with music, make-up, costume, space and movement, Rima has broadened her dance horizons. She has also been working with frames and light to create a signature style that merges different elements into a harmonious array of movements.In sync with the contentInstead of sticking to a particular style of dance, Rima’s works are more in sync with the thematic content of the choreography. Since the first lockdown, she has uploaded three videos ‘Yamuna’, ‘Pirouette’ and ‘Rise’, each around a different theme: environment, space and gender.

While ‘Yamuna’ was conceived by musician Sreevalsan J. Menon, ‘Pirouette’ and ‘Rise’ were conceptualised by her. “I visualised Sreevalsan sir’s idea through movements. ‘Pirouette’ was all about my love for space, architecture and design. It was done in a space designed by award-winning architect Vinu Daniel. And choreographing Maya Angelou’s poem is my tribute to all those women who have inspired and motivated me. This woman, from another era and another part of the world, who had a completely different experience from mine and spoke from another era, from the background of the civil rights movement… she yet has the power to stoke my inner fires,” says Rima.Rima was reading up on the life of K.R. Gouri Amma when the veteran political leader passed away recently. She says, “Towards the end of her life, she may, at times, have felt defeated and disappointed. But the truth is that her life itself is an inspiration, a guiding light for women. The power of their work, their art and their lives cannot be obliterated. It lives on. I had to pay homage to these women who walked ahead of us. We are standing on their shoulders. That was the whole idea behind ‘Rise.’”

Rima is planning her next video with veteran Bharatanatyam guru Kalakshetra Vilasini, the first head of the Department of Bharatanatyam at R.L.V. College of Music and Fine Arts, Tripunithura. “I have been learning the adavus from her. During class, she would demonstrate a particular step or a piece of abhinaya for us. I want to do a video with her where she is also performing, to showcase her amazing talent to viewers.”She attributes the success of her videos to her team with whom she has been working for more than seven years. “I can trust them with my ideas. As a choreographer and artiste who has also worked in film, I try to bring together two different art forms: dance and film, visually choreographying it with frames. In cinematography, different ideas can be communicated with one close-up shot, sans movement; so many different layers of thought can be communicated.In many frames, I have communicated just with my eyes. I use movement only as and when required,” she explains.Although she has a mood board, a light pattern and colour tone in mind, during outdoor shoots, the team lets nature guide them. “With low budgets, we have to improvise. There is a lot of give and take while shooting. The mood of the piece is communicated to the team. It is when everything falls into place that an art work comes alive. Whether it be harmonious or a study in contrasts, there has to be an understanding with the team. So many elements come into play to make the video stand out. I think it is a miracle when an art form takes shape.”