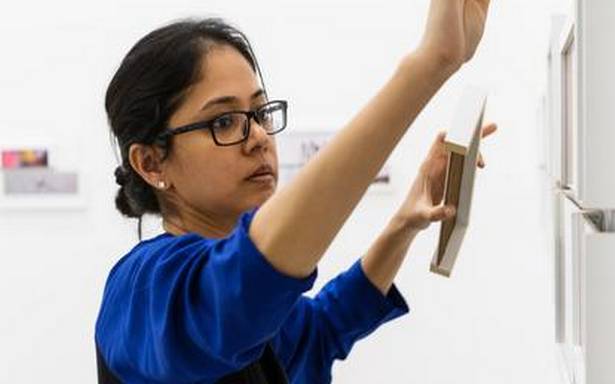 Whether it is the talking microphones, the ‘Blame’ bottle, or the bag with a label that reads, ‘There is no explosive in this’, Shilpa Gupta’s artworks always speak to their viewer about situations that are socio-politically loaded. But only to the point where one engages with the work and ‘interprets’ it, even subjectively. And the Mumbai-based artist has found the most interesting spaces to present it — from a railway station in Chemnitz, Germany, where she explored the idea of distance (social, economic or geographic) through flap boards, to her home during lockdown 2020, where a PPE suit became a model to explore pause, anticipation and anxiety (part of Architectural Digest’s #StillCommaLife series).

Part of a photo series for AD’s #StillCommaLife

Now the M HKA (Museum of Contemporary Art, Antwerp) is showcasing her first mid-career survey exhibition, titled Today Will End. The exhibition looks at the evolution of her work over the last two decades, foregrounding the speculative nature of her practice as well as the depth of her critical engagement with psychology, behaviour, politics and language.20 years under one roofIt is curated by Nav Haq, the associate director of the museum, who has been following Gupta’s practice. “Ten years ago, Nav did my first UK institutional solo at the Arnolfini in Bristol. Later, when he curated the Göteborg International Biennial, he had shown the outdoor light work WheredoIendandyoubegin, on which he had titled his show,” says Gupta, who is busy setting up the show remotely from Mumbai, exchanging floor plans and photographs with the museum.

“The exhibition looks at my work starting from the mid 1990s, which deals with human relations, through the lens of subjectivity and perception. There are several interactive works that delve into the liminal zone that hover between art and object, perspective and experience, and renewability and repetition,” says the 45-year-old. Showing at the museum, on the heels of International Museum Day (May 17), is something that Gupta values greatly. “Museums tell stories for us to reflect on our past and present, and therefore shape our future. In India, we need to re-vitalise our museums by equipping them with trained curators, enthusiasm, and a sense of purpose — to engage and share stories with a diverse range of public,” she says.

The installation, ‘For, in your tongue, I cannot fit – 100 jailed poets’

At a time when Delhi’s iconic National Museum (with a collection that spans 5,000 years of Indian history) is being razed to make way for the Central Vista project, Gupta points out that it’s not just the ‘physical structure’ of the museum that has to be preserved, but also its intellectual capacity, which has to be constantly enriched and updated. Open to interpretationAlthough the volume and purpose of the exhibition is more overarching, this is not the first time that Gupta is showing her work at the M HKA. In 2014, her works were included in Don’t You Know Who I Am? – Art After Identity Politics, an important research exhibition that defined a new reading of contemporary art.

A selection of Gupta’s artworks

For Gupta, showing at the Antwerp museum is enriching, because of the different audiences it attracts. “Like everything else, art is also subjected to the vagaries of time and context. Some artworks are more accessible than others, some live longer, some are lost, and then there are some which get retrieved,” says Gupta. Though her works could be interpreted as social or political, Gupta keeps them decidedly open, allowing their themes to be interpreted differently wherever, and whenever, they are exhibited. Catch the exhibition physically at M HKA, and online at muhka.be