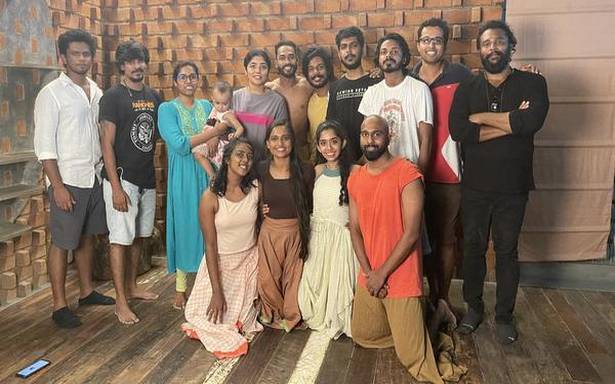 Physics, art and dance blend into a captivating sequence of twirls, leaps and nimble steps as actor-dancer Rima Kallingal turned architect Vinu Daniel’s new building, Pirouette House, into a performance space.“The pirouette is a dance move that is universally known by all, regardless of whether you are a dancer or not. It comes naturally and the sheer joy in a twirl is insurmountable,” states Rima.In the dance video, Rima and Mamangam, her troupe, come up with an energetic performance that makes use of the “natural ligh, exposed red bricks, bamboo grills, cement finish and metal scaffoldings that he [Vinu Daniel] has reused in the house,” she says.

The dancers were keen on choreographing movements that anyone interested in dancingcould relate to. “As a dancer starts spinning, they fabricate their own pirouette that is not bound by technicalities. It is the one that gives them an emotional meaning. So, this video is for anyone who has lifted their hands for that heady spin,” states Rima.In order to enhance the warmth of the frame, they decided to opt for natural light. That they would keep it as raw as possible and make the most of the building without any props. Rima adds that there is a play of contrasting forces that come together in a pirouette. “There is this feeling of letting go and restrain at the same time, while executing a pirouette. A dancer twirls in abandon but there is focus and concentration too. Likewise, there is a play of contrasts in Vinu’s space. He has tried this out in the walls of the building, which is a work of art. There are different elements of play on the same site,” she explains.

Recently, Rima happened to see a dance video where she saw a dance troupe performing at Mexican architect Luis Barragan’s beautiful creation in Casa Gilradi, New Mexico. She decided she had to see it for herself, and as soon as the travel restrictions were lifted, she was able to travel to Mexico, where she managed to see the landmark building. “I was in awe as I saw it. I knew this is what I want to do,” she says.Had she not been an actor-dancer, Rima says she would have become an architect, interior designer, or a travel blogger. “Designing in any aspect catches my attention. I am always on the lookout for aesthetics in architecture and I have been enamoured by Vinu’s distinctive work. I read up about his building practice and I like the fact that he is constantly pushing the horizon with his ideas of space that make use of natural light and geography,” says Rima.

In the new normal world, Rima feels that one has to look around for new spaces to perform and innovate to adapt to the new circumstances.A meeting of minds“Rima is a friend and an admirer of my work. She has been telling me for some time that she would like to do a choreography in one of the spaces in my buildings,” says Vinu Daniel.When Vinu finished design for a house in Thiruvananthapuram and called it ‘Pirouette House’, he informed Rima and then everything fell into place. She and her team travelled to Thiruvananthapuram for the dance video.Known for his artistic expression and eco-friendly and sustainable ways of building, Vinu, an award-winning architect, has been in the limelight for his work that makes use of upcycled materials and, mostly, handmade bricks made on the site.Conceptualised and directed by Rima, the music was by Neha and Yakzan. While Greesh Narendran and Aloshy Amal did the choreography, the dancers were Aloshy Amal, Amitha S. Ram, Greeshma Narendran, Jyothish, Pratheesh Ramdas and Sanjana Rachel Jose.