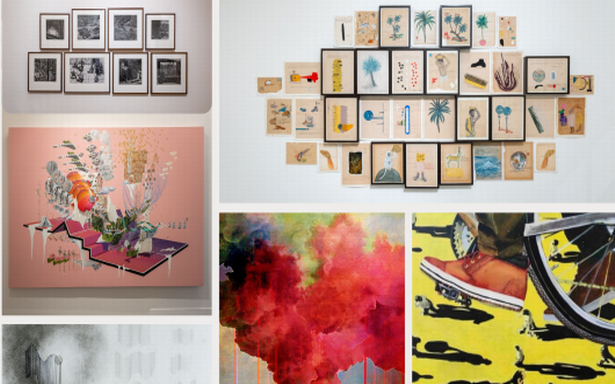 Everything’s shrinking, from price tags and canvas sizes to payment models, as curators and gallerists experiment with fresh themes to tap a new audience

Delhi Contemporary Art Week (DCAW), which concluded two days ago at Bikaner House, saw art lovers getting back to some of the old ways of enjoying the physicality of art — albeit just for a few hours and socially-distanced at that. What was interesting, however, was that of the sales clocked, many were first timers. “In the last few days alone, I sold around 10 works and only one of the buyers was known to me,” gallerist Bhavna Kakar of Latitude 28 tells The Hindu Weekend, explaining, “DCAW showcases younger, contemporary artists, and the idea is to engage new collectors. So the price is usually between ₹25,000 and ₹5 lakh.” The gentler price points meant someone in their 20s picked up Anupama Alias’ work, a young couple in their 30s, who’s renovating their home, bought a Prajwal Choudhury, and another couple from Kolkata acquired a Diptej Vernekar via Instagram. “The idea is not to be a shop and cater to the same buyers or do the same old tried and tested shows,” adds Kakar, who, two decades on, is experimenting more.

Artworks from ‘Believing the Unbelievable’

Themes for the winThanks to the pandemic, the art market had ground to a halt for months. Though galleries swung into action in the third quarter, taking art online and creating new ways for collectors to interact with the works on sale (through digital viewing rooms and walk-throughs), it was also a time to tap a new tribe of buyer — the young, digitally-savvy one. For many gallerists, this meant coming full circle, curating shows with accessible themes and affordable price tags, much like they had years ago when they were starting out.Underlining diversityCurator Myna Mukherjee, who works between New Delhi and New York, has announced the opening of Art at Blue Rickshaw, a B-to-B portal (in collaboration with US-based art consultancy, Blue Rickshaw), this May, which will sustain artists who find it difficult to gain representation in the established network of galleries for various reasons. “We at Engendered always work with artists who are marginalised for either their gender sexuality, or belonging to a minority group,” says Mukherjee, who believes the portal — with works in the ₹30,000 to ₹3 lakh price bracket — will bring in more international buyers.“In unprecedented times, art has been all about finding a way to go forward. Today, at Apparao Galleries we have doubled the number of shows we are doing because they are all virtual. And of them, three-quarters are by emerging artists and most are small format [targeting a young crowd that surfs the net],” says Sharan Apparao, Chennai-based gallerist and curator. Themed shows — like her latest group exhibition, Believing the Unbelievable: The Metaphor of The Ark, which takes off from the Biblical tale of Noah’s ark — not only help focus viewers’ attention, but also make it more interesting to build a narrative. Incidentally, it has done exceptionally well; aside from new buyers, several of her regulars picked up pieces too.“We want to do shows with younger artists to support them, since I find their works exciting and they don’t have visibility,” says Apparao, who set aside a few works for herself — canvases from Avani Aggarwal’s Utopia series (vibrant, multi-hued ‘clouds’ painted with archival inks) and Dushyant Patel’s art that interprets Noah’s story through an Indian lens (lots of elephants here). Going forward, she plans to have at least one themed exhibition a month with none of the artworks going beyond the ₹25,000 tag.

Talking printA less conservative approach to acquiring art is also helping invigorate the market. If seasoned collectors pick up art as investment or because they have caught “the bug”, as Prateek Raja, co-founder of Kolkata’s premier art gallery, Experimenter, puts it, “most young collectors buy it to live with it. These are interesting conversations because you are involved not just with the aesthetic idea of art, but also the living idea of it”. And what they want to live with needn’t always be the big names.Compact and powerfulApparao’s TAP India — a collective platform of 14 galleries created last year to generate more visibility for artists and explore newer markets — has held several small format shows, including Thinking Around Corners. Curated by Kakar and Renu Modi, it featured 2×2 ft works. “We created the ‘square format’ show with young collectors in mind, who do not have big budgets,” says Kakar. “It had well known artists too, but featuring their smaller works meant they were more affordable.” The uniformity in theme (square artworks) also addressed another growing category: those who want to pick up art as décor for the home. “People have spent so much time in their homes that they have realised this is important. I’ve had many calling me to say ‘I’m bored of looking at my walls.’ By keeping the works small, if someone wanted multiple pieces, they could pick them up.”“I’d been seeing a new breed of people who are interested in art, music and culture coming to our shows in the last couple of years, but not able to get entry point art. They didn’t care much for the name; they wanted something interesting, cool,” says Kakar. Then, when she curated Matter in Matrix, a 2020 show dedicated to printmaking — with prices starting as low as ₹10,000 — young buyers came in droves. She recalls how even students wanted to buy artworks. “We realised this is the way to go about it. You have to pick the right work by the right artist and position it in such a manner that the younger crowd feel interested in buying it.”The ongoing exhibition, Pratibimb: Stories in Print, at Gallery1000A (Lado Sarai, Delhi), featuring women artists, including Anjolie Ela Menon, Kanchan Chander, and Durga Kainthola, underscores the point — it’s had a great run with multiple sales. “Printmaking such as etching, woodcut and silkscreen, is a democratic art form, since it’s not only affordable [between ₹25,000 and ₹2 lakh] but, because of their many editions, they also have greater reach,” says curator Rajan Shripad Fulari, a printmaker himself. The gallery has several more themed shows planned, including one in July by artists from the South.

At the Delhi Contemporary Art Week

Art on EMIBut what does one do when even the most affordable artwork is still beyond one’s budget? Many galleries now offer long term payment plans. Like the Experimenter. Known for their work expansive, out-of-the-box ideas and work with artists through projects like Experimenter Labs — its Generator Co-operative Art Production Fund encourages supporters to anonymously donate funds to artists — they also pride themselves in nurturing an organic relationship with collectors. “A lot of youngsters are buying art now because of the new spaces they’ve moved into, be it their homes or offices. But they don’t [always] have the bandwidth to acquire expensive works of art,” says Raja. Like a young fashion professional who wanted to buy a particular piece by photographer Sohrab Hura, known for his vivid, surreal frames. “He couldn’t afford it, but he couldn’t let go of it either. So, after he confirmed [the purchase] last June, he’s been paying a monthly amount, which will end in May.”This practice isn’t as uncommon in the art world today as it used to be, thanks to the needs of a newer audience. As Kakar puts it, “That’s how I started my collection 22 years ago, so why not offer the same now.”

How art therapy can help kids through trauma
A picture paints a 1000 cusswords
To Top
error: Content is protected !!
Top