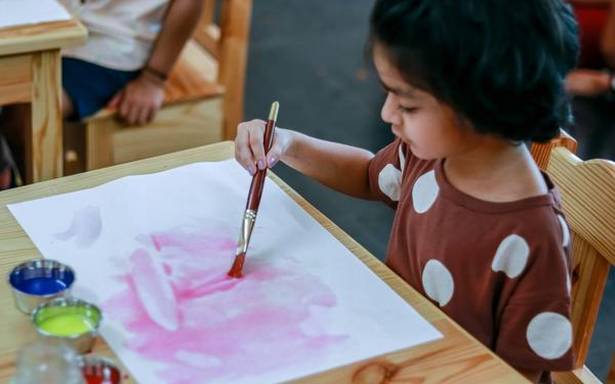 Art opens up a non-verbal form of communication for children having a tough time expressing their thoughts and feelings. Often, it can also point towards the source of trauma, say therapists

Devika Jasra was a little short of turning 14 when she saw her father collapsing on the floor and being rushed to the hospital. She heard her mother, frantically coordinating with doctors. While Devika’s father survived the heart attack and recovered, what became a casualty was Devika’s sleep. Cut off from her regular world due to the pandemic, Devika grew restless and even had occasional panic attacks.In February, art came to her rescue. Weekly drawing and painting sessions over the past four months have helped her calm down. “The classes have helped her open up, and she is slowly getting back to a more secure mental state,” says her mother Snehali.According to Nikita D’Souza, Mumbai-based child psychologist, art opens up a non-verbal form of communication for those who have a tough time expressing their thoughts and feelings. Special educators suggest that working with colours and drawings while talking about traumatic experiences helps reduce the feelings of anxiety, anger and fear among children. Moreover, it can offer clues about the sources of the trauma.Recently, the Central Government released guidelines for parents’ participation in home-based learning amid the pandemic and emphasised the role of art as a therapy for children under stress or trauma.Nikita uses art in many of her sessions, especially while working with a child with attention deficit hyperactivity disorder or autism spectrum disorder. and she says it has been a rewarding experience. “Not only does it allow students to express emotions, it provides behavioural support and stress management,” she says.Practising artforms together has in fact been an integral part of the Indian family: the traditional kolam of South India, and paintings in tribal hamlets are good examples. “Observing the forms and representing them on paper eventually aids in the process of academic writing,” says Jayashree Rao, a Mumbai-based art therapist. It is not just about the drawings that are being coloured in, but also about the colours being used, explains Jayashree. “Colours work at the ‘feeling’ realm. They speak to humans directly and differently, each with its own quality, separate from forms,” says Jayashree, who uses methods like wet-on-wet watercolour painting. “Repetitive, free non-instructional painting with just two primary colours is seen to relax children. There’s no goal of offering a form or a visually perfect work here,” she adds. Jayashree uses this type of art therapy on children with cerebral palsy, ADHD and sensory processing disorders. “This allows them to express themselves freely without getting overwhelmed by too many colours, forms and details. There are archetype colours for certain temperaments which are used too in Waldorf education,” she adds.What colours reveal about your child’s mental healthSaloni Doshi, mother of a 14-year-old boy with a genetic condition, Vanishing white matter disease, says that working with colours makes her son happy. “He uses primarily yellow, blue and red and is much more relaxed when he is drawing something on his canvas. I don’t have to coax him to do that. It gives him a sense of accomplishment,” says Saloni. Her son, Aditya, looks forward to the art sessions with his therapist twice a week. Clues about a child’s mental state can sometimes be seen in the pattern of strokes, the pressure applied, and the choice of colours, says Nikita. “It is not very simple though to understand a child through their works. The assessment has to be done across multiple art sessions with the child,” she adds. One of the most common methods of assessing a child’s mental state is the House-Tree-Person method. A projective test, it is designed to measure aspects of a person’s personality. The child is asked to draw a house, a tree, and a person and the test-giver asks questions about each picture. “It is very subjective and open to interpretation by the test-giver,” says Nikita. According to art therapists, the manner in which a child engages with a medium of Art changes as they grow up. Visakhapatnam-based Deepti Vadlamudi, special educator at Swechha Waldorf school, says that for a child above seven years of age, wet-on-wet painting becomes more complex with shades and forms. It is then succeeded by veil painting, which is meditative.“In this method, children use water colour that spreads easily on wet paper and blends with other colours. Only primary colours (red, blue and yellow) are used as they blend with each other to create many shades of green, orange, brown, grey and purple. This provides children with a canvas of rich imagination. The colours, when they flow freely, also evoke many emotions and feelings. We usually see children favour a specific colour that calms them or excites their individual temperament,” says Deepti.And calmer children, believes Deepti, can become happy learners. “Art has and will always continue to have healing powers, provided we are not driven by the goal of perfect artwork,” says Jayashree.