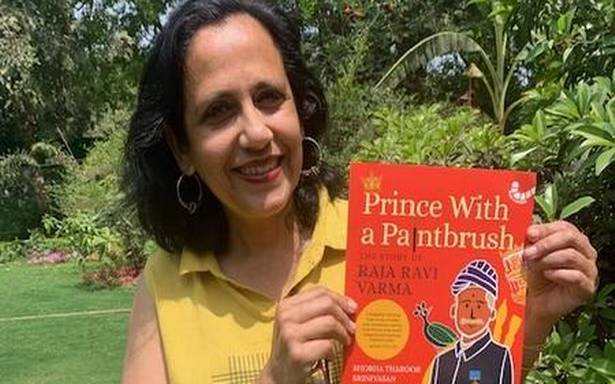 Shobha Tharoor Srinivasan’s ‘Prince With a Paintbrush: The Story of Raja Ravi Varma’, introduces children to the multifaceted artist

Author, poet and voice artiste Shobha Tharoor Srinivasan brings alive the life and times of Raja Ravi Varma, the celebrated artist, in Prince With a Paintbrush: The Story of Raja Ravi Varma, her book for children. The richly-illustrated book, which released on Monday, introduces children to the legacy of the artiste whose works have influenced and continue to inspire designers, artists and historians. Excerpts from an e-mail interview: Raja Ravi Varma is an unusual subject for a book for children…So many children are familiar with artists in the western canon; they can recognise DaVinci’s Mona Lisa, or Van Gogh’s Starry Night, but cannot recognise paintings of well-known artists from India. The idea of a book collection on Indian artists had thus been in my mind for a while. I had begun looking at the art of Raja Ravi Varma and Abanindranath Tagore as I was planning to do a series of art books for young children with poems to accompany the art. These artists had their work in the public domain so their art could be easily included in a book without running into copyright violations.Ravi Varma is one of India’s most famous 19th Century Indian painters. What gave him the edge over other painters of his generation was that he used the art techniques of European Realism to tell Indian stories and paint portraits of Indians. At a time when travel was not easy, he travelled all around India representing the diversity of the nation with such talent. He was also one of the first to use oil paints on canvases. Yet so few children seemed to know him! I thought there was no better time to address this lapse. Red Panda endorsed the idea and proposed an illustrated biography for young readers. By reading this book, readers will discover that Ravi Varma’s use of colour and realistic renditions of portraits have been “copied” in old Bollywood posters and in Amar Chitra Katha comics. Children many also be drawn to the stories from the Indian epics and the Puranas that were represented with such dramatic detail by Ravi Varma in his paintings.How did you go about the research? I read widely on the Internet, which was my primary source. There are interesting anecdotes and personal reflections from family members. I read articles on Ravi Varma’s painting technique, commentary on the breadth of his travels throughout India etc. Since this is a children’s book, my task was to frame the story in a manner that worked for them. How the narrative is framed is as important as the biographical information within the pages. It has a child narrator who is present on every page and thinks about her own artistic production in the course of the story.Ravi Varma was a painter and businessman, perhaps the first to start the printing of Indian art works…My main purpose for the book was to introduce Raja Ravi Varma’s paintings to children. I wanted to showcase Ravi Varma’s portraits which were beautiful and memorable, and also wanted to share a few of his mythological paintings which gave Hindu gods their most popular renderings. I feel we have represented quite a bit of the artist’s variety in the book.

Of course, the fact that he started a printing press which made it possible to mass produce his art and make it affordable is important as well. In fact, the public acquisition of his paintings allowed gods to be worshipped at home. This was important during a time when many Indians were excluded from visiting temples because of caste restrictions. The book includes fun facts, vibrant illustrations, biographical details and shares the artist’s story and art journey with young readers.It must have been hard to strike a balance between the nuances of art and the narrative… It was important to me that young readers found themselves on the page as they read the book. Rayika Sen’s representation of the narrator is delightful; children love bright colours, and enjoy looking at characters with character. It was important that the illustrations complemented Ravi Varma’s incredible art and did not take away from his tone and style. His art is visually appealing and his paintings have been characterised as “a burst of colour”. You will see in the book that the illustrations accompany the art with skill and creativity. I wanted readers who are artists themselves to have an opportunity to think about their own creativity. Ravi Varma is looked up to for inspiration for his depiction of textiles, saris, jewellery, plants… He is often credited with popularising the sari as it is worn now…Many of the subjects of Ravi Varma’s paintings were the women that the artist met during his life and travels, so the paintings reflect a variety of attire and physiognomy. His paintings have brought a renewed interest in portraits of sari-clad women who are traditionally attired. His realistic style allows us to see details, including the folds of the pleats on the sari, examine the stylistic variance of jewellery in different states of India, and more. His painting Galaxy of Musicians represents Indian women in regional costumes and showcases a variety of Indian textiles. The women on the canvas are also shown as practitioners of different musical instruments and traditions. It’s a remarkable painting that illustrates the diversity of India in such a beautiful way and, in my mind, celebrates national integration. A couple of years ago actors and dancers recreated Ravi Varma paintings for an exclusive calendar as a fund-raising effort for a charitable trust. The artist’s representation of women is still seen as the “ideal” by many.

So much of his art inspires me. The realistic details, the representation of people across the country, his dramatic renderings in the mythological stories so that you see the story unfold on the canvas. His commercial sense is also commendable. He made art affordable to ordinary people and not just for wealthy patrons. He brought “god” into people’s homes by his paintings.Not many books about Indians in the art and culture field are written for children. Hence your book opens a new chapter in this area.We have a treasure trove of art, classical stories and more in India to bring back into our collective memories. People of my generation remember stories from the Panchatantra or the Jataka Tales or Tenali Raman or Akbar and Birbal but I think children today are growing up on a different diet of books. But I’m confident that the interest exists. The success of my lockdown read-aloud from the classics on YouTube is testimony to this fact. And the buzz in social media about Prince With a Paintbrush: The Story of Raja Ravi Varma does make me feel hopeful that children and their parents are ready to embrace a book about him.Many houses in Kerala had Ravi Varma prints in their pooja rooms and homes. Any such recollections of prints in your ancestral home in Palakkad?We have many Raja Ravi Varma lithographs hanging on the walls of our family’s tharavadu, Mundarath, in Palakkad. The paintings are all from the epics, and these prints were often the springboard for story-telling sessions at home from my grandmother and, later, my aunts. The pictures are still on the walls. I have a couple of prints in my home in California as well.