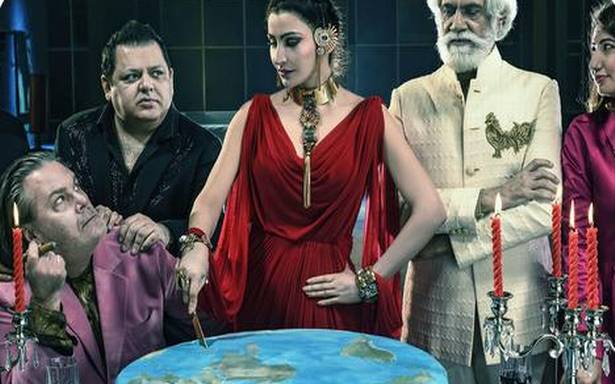 How more and more artists are working with themes like climate change and depleting natural resources, and connecting with audiences

Long before the elite left India in their private jets, abandoning the country in its pandemic distress, visual artist Vibha Galhotra had touched upon this raw nerve — of the privileged leaving the planet after depleting its resources. In December 2019, she approached her colleagues and friends (the who’s who of the Delhi art scene) to create The Final Feast, which is currently showing at the Asia Triennale in New York.Borrowing from Leonardo da Vinci’s Last Supper, the photo-dramatisation featured art-connoisseur Shalini Passi as a glamorous interpretation of Jesus, hosting a supper and cutting an Earth-shaped cake amid her apostles: gallerists Peter Nagy and Bhavna Kakar, art writer-curator Ina Puri, designer-curator Rajeev Sethi, designers Rohit Gandhi and Rahul Khanna, dancer Navtej Johar, and architect Mrinalini Ghadiok, to name a few. “The Final Feast is part of my exploratory Life on Mars series, which looks at climate change. It demonstrates how human greed has taken over, leaving the world in shreds, just like the circular blue cake that is cut, eaten, and forgotten,” says Galhotra about her allegory.

Recording conflictGalhotra’s work reflects an increasing concern among artists about such tough questions, especially on biodiversity and depleting natural resources. They believe their canvases and installations will help build awareness. After all, if science provides facts — about global warming, climate change, loss of habitat — then art tells the stories. And never has the need for such tales been greater.“With the Internet exposing us to so much information, and with more time to research, artists are honing in on these deeper-reached terminologies and are not hesitating to use it in their art,” says Svabhu Kohli, whose latest work, which explores the conflict between man and nature, was exhibited as part of Make Art for Mumbai’s Mangroves, an ongoing initiative by the collective, Ministry of Mumbai’s Magic (that aims to protect the city’s green ecosystem by reaching out to concerned policy makers and drive citizens through art).

Survival storiesArunkumar HG has long been a proponent of the harmonious relationship that once existed between humans and nature, something that has now become corroded. “Monoculture is prevalent now because of commerce,” he says, pointing out that, as a result, the natural diversity of spices has become extinct. One of his recent works — a sculpture displayed in shades of dark earth, where the deadwood piled in a heap gives birth to a luscious, albeit mutant flower — was displayed at Bikaner House, as part of Delhi Contemporary Art Week.“India’s cities, towns and villages have seen a rapid form of urbanisation that has led to development wiping out the astonishing natural world that had surrounded us not very long ago. Almost all of our cities face the wrath of toxic air and water pollution,” says Kohli, adding that it is incredibly important now to understand our ecosystems better. Especially now, as viruses (like the one responsible for Covid-19) are likely to become more common as people continue to tamper with natural habitats.Six leading artists, including Kohli, Anjali Mehta, Afrah Shafiq and Michelle Poonawalla, launched a series of artworks, under the title ‘Biodiversity by the Bay’, for the Mumbai initiative, each with a different focus. “I started studying where we came from and how we got here, and one thing that seemed starkly absent was the presence of living things beyond humans.” says Mehta, of the overcrowded megalopolis of Mumbai. “[My art] democratises laboratory terms and academic language, and presents it in a way that is accessible, approachable, and generates much-needed empathy. My hope is that those who view it, become part of the artwork and care about the message enough to want to do something.”

Micro to the macroMeanwhile, last November, in the UAE, Sonia Mehra Chawla presented her mini-retrospective, (Un)Containable Life, at 1X1 Art Gallery. It examined her ongoing engagement with the ecological crisis and her concerns for the ‘relentless destruction of the planet’.Curated by Nancy Adajania, Chawla’s work — combining complex forms of photography, printmaking, painting and film — presents a selection of art made over the last seven years, which saw her exploring mangrove forests, wetlands and salt pans in India. A tidal island in Scotland, and the ruins and marginalised communities she found there also offered inspiration. Recently, in March, she and Adajania also took the message in her art to the masses through a webinar attended by close to 300 people.“Artworks that address issues such as these are grabbing attention, both from viewers and collectors, because they are relevant and timely,” concludes Renu Modi of Gallery Espace, who represents artists such as Arunkumar HG and GR Iranna, both of whom tackle pressing issues of biodiversity and the environment.“While it is great that we are acknowledging human coexistence with the leopard or the elephant, it is important to develop holistic ways of supporting the whole ecosystem. Mumbai’s mangroves, for example, support thousands of other species. Art installations allow people to ‘feel’, and I strongly believe that what one experiences and feels, one remembers,” says Michelle Poonawalla, who painted a host of butterflies as her contribution for Make Art for Mumbai’s Mangroves

How art therapy can help children cope during a pandemic
Artist Bhavya Desai’s latest illustrations delve into the chaotic energy of the Indian Railways
To Top
error: Content is protected !!
Top