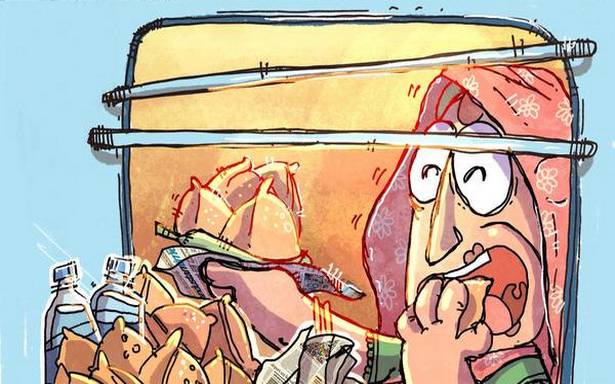 If you haven’t met a “binge-eater Pushpa” at a railway station, you have been one; the person who hastily grabs a few samosas wrapped in newspaper out of a platform vendor’s basket, through the train window grill. It is also through these window grills that we see bits of life unfolding in a train, as families unpack tiffin boxes, heave suitcases down from the upper berth, and socialise with strangers to kill time. The pulse of the Indian Railways is inevitably etched onto all of our travel experiences. For Chennai-based artist Bhavya Desai, a recent train journey from Chennai to Bengaluru opened the floodgates to many such memories and observations. He translates this experience into a series of illustrations that delves into the nostalgia-inducing, chaotic energy of the Indian Railways as we know it. ‘Binge-eater Pushpa’ is one of the many characters that make an appearance in this series titled Chaotically Organised.

‘The In-house Pantry’ from the sub-series, By the Window
| Photo Credit:
special arrangement

Bhavya recalls having five hours to kill in that train journey to Bengaluru. “I made the most of it. I spent a lot of time walking on the platforms. The journey instantly spoke to me,” he says. “There is so much more life in a train.” Here, adds Bhavya, you see people being themselves.From this treasure trove of interesting sights, Bhavya listed down all that he wants to showcase. “I have created sub categories. One is on life on the platform, which includes everything from water dispensers to coolies who drag heavy carriages. Another would be on the train itself — a look inside the coaches.” For instance, a work-in-progress sketch filled with line drawings shows a crowded station — food stalls, passengers lounging in wait, and porters shoving their way through. The chaos is also a warm reminder of life before the pandemic.

Currently, he is working on a sub-series called By the Window that looks at characters and life in a train, through the cross section of a window. Similiar sub-series on the engines, solo travellers and the interior views of the train bogies, are also in the works. Bhavya plans to have 12 illustrations in each series, and hopes to wrap up the entire project in the next three to four months. “Throughout all the illustrations, there will be characters,” he adds. Observations aside, a lot of research also goes into the project, especially for the series on engines. “I am not too familiar with the models of engines. So, now, I am reading up on the different engines there are and about the retired engines as well. It’s so vast!” he says.The fact that the Indian Railways has such a huge, loyal fan following, pushes him to dig deeper. “This is also why I want people to give me ideas. I want to make this more inclusive. Drawing only what I have seen, is again limiting the scope of this project.”Bhavya Desai’s works can be viewed on Instagram: @desaibhavya

Art through a biodiversity lens
Photo exhibition showcasing plastic pollution on in France
To Top
error: Content is protected !!
Top