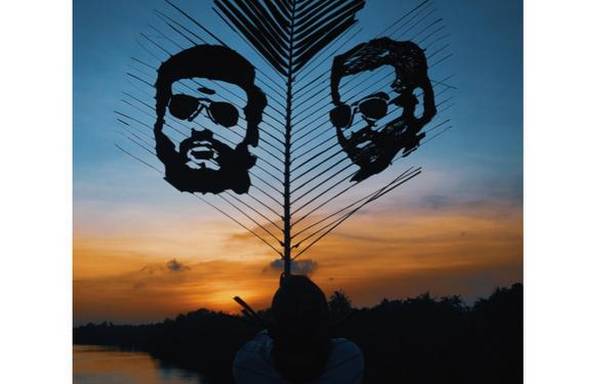 Coconut palm leaves, and those of jackfruit, teak and peepal turn into canvases for artists in Kerala, during lockdown

On Dulquer Salman’s birthday in July, members of Kerala Leaf Artist’s Association made 21 leaf artworks — portraits made on leaf — of the actor and posted it on the Association’s Instagram page (kerala_leaf_artists). Recently, they followed it up with some of Nivin Pauly’s, on his birthday, October 11.‘Leaf art’ is drawing on a leaf — like a stencil — using a knife. These artists post their work, usually of actors on their Instagram handles, and by tagging them, hope to be noticed. “It might be about getting noticed but it translates to commissioned work for us,” says Manu KM (aesthetic._.soul), an artist from Aluva. Commissioned work sustains them, especially during times such as now. This comprises framed leaf portraits, “it is something like getting caricatures done,” he says. The Leaf Artists’ Association, formed in March has around 65 members — most started doing leaf art during lockdown. The members encourage each other, share how-to tips and pass on orders for commissioned work. Twenty-two-year-old Manu is a ‘veteran’, having started a couple of years ago. “There were barely two or three of us then. More people are coming in since there isn’t much else to do,” he says. A leaf art video made him curious enough to give it a shot. Works by artists such as Manu inspired others like college student Midhun Pradeep (midhun_pradeep_art_) of Edathua, Alappuzha and lab technician Akshaya K of Calicut (art_semper).

Akshaya is ‘new’ to leaves, “I have wanted to but work kept me busy. With lockdown, I had all the time and leaves.” She is one of the few women leaf artists in Kerala; she works with easily-found jackfruit leaves.An unassuming canvas Leaves of jackfruit, banyan, teak and peepal trees are used. “These are thick, can be drawn on and cut. Teak leaves are not easy, despite their size, as they tear easily. The perfect leaf to me is one that has a good shape and large enough surface area,” says Manu, a former bank employee.He is one of the few artists who works with coconut palm, a difficult medium as it has no ‘surface area’. Four portraits can be made on each, two on either side. The leaf is readied using tape to secure the sections together to create a surface, before drawing and carving the picture. The work lasts for barely two days before the leaf starts drying.

“It is a challenge, and is satisfying. Earlier I had time, now with online classes I have to make time,” says Midhun. Appreciation is a great motivator for him. Although other actors have shared his works on their Instagram pages, he hopes actor Tovino Thomas sees his tribute on a coconut palm.Manu was pleasantly surprised when actor Vijay Sethupathi sent a voice note thanking him for his work — two portraits made on a coconut palm leaf. While an expert would need only an hour to make a portrait on a jackfruit leaf, four portraits on a coconut leaf can take up to six hours. For commissioned works, the leaves (not coconut) are varnished and then framed so they do not dry. The price for a single portrait is ₹1,000 and ₹1,200 and above for two.

Interestingly, there are only a few works featuring female actors. “Women’s faces have finer details such as eyebrows, the lips that need more attention. There is more free space, as opposed to men whose hair and beard are comparatively easier to interpret,” says Kiran Karthik (mr._drawer), a Thiruvananthapuram-based leaf artist, who also carves portraits on watermelons.The challenge, Midhun jokes, is finding the perfect spot to photograph the works, especially those on coconut trees. “You need an open space, where the sky forms the backdrop for the art work to show,” he says, adding “And with these restrictions one can’t venture out too far!”

Chennai-born Nonviolenze’s début album is an amalgam of music and art
Vimal Chandran’s 2021 calendar, Songs for the Birds features his watercolour paintings
To Top
error: Content is protected !!
Top