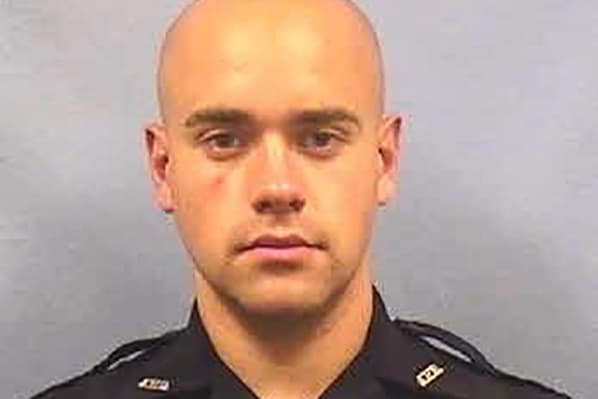 Former Atlanta Police Department officer Garrett Rolfe, who was fired after the shooting death of 27-year-old Rayshard Brooks, poses in an undated photograph released in Atlanta, Georgia, U.S. June 14, 2020.Atlanta Police Department | ReutersThe Atlanta Civil Service Board announced Wednesday that it is reversing the termination of Garrett Rolfe, the former police officer charged in the fatal shooting of Rayshard Brooks.The board said in a five-page decision that the city failed “to comply with several provisions” of the Atlanta City Code and “the information received during witnesses’ testimony.””The Board concludes the appellant was not afforded his right to due process. Therefore, the Board grants the appeal of Garrett Rolfe and revokes his dismissal as an employee of the APD,” the decision read.Brooks, a Black man, was fatally shot in June in the parking lot of Wendy’s. Rolfe and Officer Devin Brosnan were called to the restaurant after receiving a report about a man asleep behind the wheel of a car in the drive-thru.Dash and body camera video showed that Brooks appeared cooperative as police questioned him for more than 25 minutes. After he allegedly failed a field sobriety test, Books struggled with the officers as they tried to arrest him, the Georgia Bureau of Investigation has said.During the struggle, Brooks grabbed one of the officer’s stun guns and ran away with it. Officials said Brooks turned around and pointed the stun gun at police and was shot twice in the back.Then-Fulton County District Attorney Paul Howard said at a news conference shortly after the death that Brooks “never presented himself as a threat” and appeared “almost jovial.”Howard said Brooks followed every instruction from the officers and was never informed that he was under arrest for driving under the influence.According to the DA, more than two minutes passed when medical aid was not provided to Brooks. During that time, Rolfe kicked Brooks’ body and Brosnan stood on his shoulders.Rolfe was fired by the Atlanta Police Department on June 13, a day after the shooting. In August, he filed a lawsuit against Atlanta Mayor Keisha Lance Bottoms and then-interim police Chief Rodney Bryant.In the suit, Rolfe said he was terminated “without an investigation, without proper notice, without a pre-disciplinary hearing, and in direct violation of the municipal code of the city of Atlanta.”Fulton County District Attorney Paul L. Howard Jr. point at a picture displayed inside the courtroom as he announces 11 charges against former Atlanta Police Officer Garrett Rolfe on June 17, 2020, in Atlanta, Georgia.Chandan Khanna | AFP | Getty ImagesIt also stated that his use of force “was proper and in compliance with Georgia law” and the police department’s policies.Rolfe asked to be reinstated with back pay and benefits. Last month, he took part in a virtual hearing with the board to appeal his firing, according to WSB-TV of Atlanta.The Atlanta Police Department did not immediately return a request for comment Wednesday about the board’s decision.Rolfe and Brosnan were both charged for their roles in the deadly shooting. Rolfe was charged with 11 counts, including felony murder, aggravated assault with a deadly weapon, criminal damage to proper and violation of oath.Brosnan was not fired by the department and was instead placed on administrative leave, even though he was charged with one count of aggravated assault and two counts of violation of oath.

Did Facebook’s Oversight Board make the right decision on Trump’s ban?
More than 40 attorneys general ask Facebook to abandon plans to build Instagram for kids
To Top
error: Content is protected !!
Top