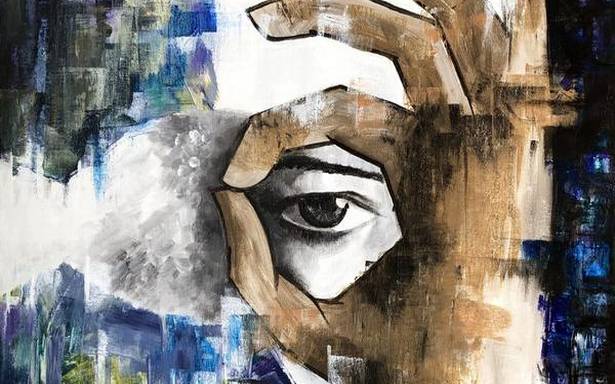 Against earthy shades of red, brown and purple-grey, three or maybe more faces seem to merge. The figures, some black and white, and others in colour, have taken form at the centre where the background colours meet. They capture emotions through a surrealist lens. Titled The Portrait, the work suggests that there is more to a portrait than a single, straightforward perspective.Chennai-based artist and filmmaker Umapathy Muthukrishnan explores the different facets of human emotions in a series of his works that were on display at OnArtFair, a virtual art fair, hosted by mojoarto.com, last weekend.Through a combination of abstraction and realism — both genres demarcated by Umapathy’s use of black-and-white and colours — he attempts to delve into the complexity of the mind.

A graduate of the Government College of Fine Arts, Egmore, Umapathy, for the longest time, had been working on an order-basis. It was in December 2019, that he decided to flesh out his ideas about greyscale and colour. “I love to concentrate on humans, because humans possess a depth in terms of feelings,” he says. Other elements like animals, birds or objects, are seen surrounding this central, often abstract subject. Umapathy, who has also dabbled in diverse fields like advertising and writing, is particularly fond of drawing the human body: he tends to concentrate on the eyes and skin textures of his subjects. “I believe that black-and-white as a gradient brings out emotions better than colours. When you close your eyes and imagine something, you are likely to see it in black and white,” he explains. In one of his works, a staircase in grey leads to a window beyond which are colourful buildings. On the window sill is a bird marking reality from imagination. His artistic style is characterised by distorted figures with sharp lines which also signal the difference between reality and imagination.

World Suicide Prevention Day: Art as a new visual language for mental health in India
Artist Sesha Brahmam’s snapshots from the other side
To Top
error: Content is protected !!
Top