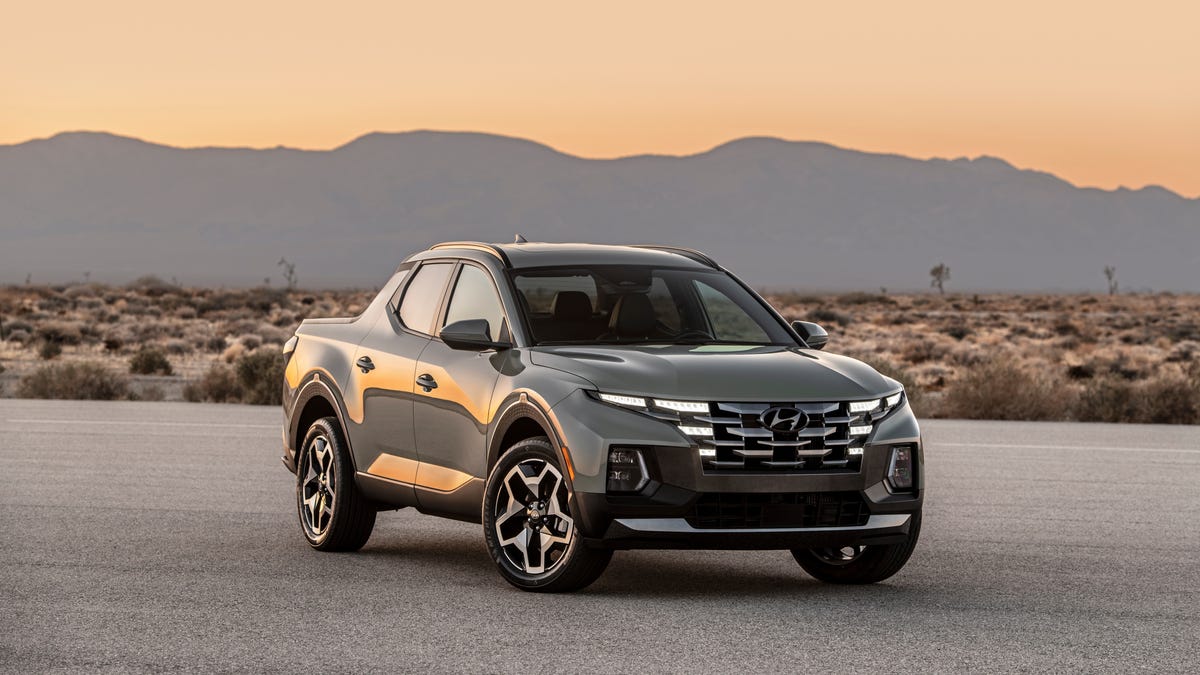 2022 Hyundai Santa Cruz breaks ground in sport adventure vehiclesHyundai unveiled its highly anticipated Santa Cruz, a crossover-pickup combo that first debuted as a concept vehicle at the 2015 Detroit auto show.Automoto TV, Automoto TVHere are two words that haven’t gone together for the last decade or so: “compact” and “pickup.”Vehicles have been getting bigger and bigger, satisfying the American urge for higher, larger rides in the form of bulky crossovers, three-row SUVs and midsize and full-size pickups.The compact pickups of days gone by, like the Chevrolet S10 and Dodge Dakota, have felt like a distant memory.No longer.Compact pickups are poised to make a comeback in the U.S., appealing to Americans who don’t need the girth of a large pickup but like the idea of the open-bed in the back that an SUV can’t provide.Save better, spend better:  Money tips and advice delivered right to your inbox. Sign up for free hereUnemployment $10,200 tax break: Some may need to amend returns for tax refundsHyundai made a splash last week with the reveal of the 2022 Hyundai Santa Cruz, a crossover-pickup combo that first debuted as a concept vehicle at the 2015 Detroit auto show.“Immediately I see the appeal,” says Ivan Drury, senior manager of insights at car-research site Edmunds. “You have a bed, you can fill it with stuff, you’re not towing a bunch, but it will work for a Home Depot run for your weekend DIY project.”The buzzy Santa Cruz looks like a sign of things to come. Ford is widely rumored to be gearing up to make a compact pickup called the Ford Maverick, a nameplate resurrected from the dustbin of long-gone vehicles in the same way the automaker has recently revived the Bronco SUV.Analysts are speculating that others could follow, as pickups continue their rise in popularity, further reducing the market share of passenger cars, which now represent only about 1 in 4 new-vehicle sales, according to Cox Automotive car-buying site Autotrader.About 1 in 5 Americans would consider buying a compact pickup. Their No. 1 reason is cargo space, followed by fuel efficiency, price and size, according to a Cox survey of consumers in March.But only about one-third of car shoppers are aware that compact pickups are in the works.“Awareness is pretty low, so there may be some opportunity if the automakers really get behind it and promote it,” Autotrader executive analyst Michelle Krebs says. “The pickup truck market has grown so substantially, and there’s terrific profit in it.”One key reason that there may be an opportunity for automakers: Midsize pickups and full-size pickups have grown in size in recent years. In general, today’s midsize pickups are about the size of full-size pickups a generation ago.“The (midsize Ford) Ranger is probably the size of an old F-150, so there is space underneath there,” Krebs says.A risk for automakers is that by introducing small pickups, they will cannibalize sales of their existing models.But Kevin Roberts, director of industry insights and analytics at car-buying site CarGurus, says compact, midsize and full-size buyers are largely different. Full-size pickup buyers are often in need of substantial utility for work, while midsize buyers may undertake major home projects, and compact buyers are less likely to need to haul sizable items.“I really think they’re different markets,” Roberts says.Compact pickups like the Santa Cruz might be smartly aimed at markets like its namesake community in California, says Drury, the Edmunds analyst.To be sure, you can’t lay a bicycle on its side in the bed or haul significant materials in the bed.“You’re not going to fit drywall back there or a bunch of 2 by 4s,” Drury say. “But it’s not really geared for that consumer base and I think that’s where it wins.”While size is a big piece of the appeal of compact pickups, price and fuel economy could make the difference. Full-size pickups often run more than $50,000 and midsize pickups typically come in the $30,000 to $40,000 range. But compact pickups could be sold for $30,000 or perhaps even as cheap as the low $20,000s, Drury estimates.While the profits won’t be as significant as they are for larger pickups, automakers might not be able to resist the opportunity. Ford’s archrival, General Motors, could be enticed to enter the market to compete with the Ford Maverick, analysts says.“If they don’t, they will be losing sales,” Drury says.Ram, which sells the popular Ram 1500 full-size pickup, appears less likely to enter the compact space for now, if only because the brand doesn’t have a midsize pickup yet. Analysts have speculated that Stellantis, the automaker formerly known as Fiat Chrysler that makes the Ram and Dodge brands, could soon bring back the Dodge Dakota as a midsize pickup.Investors would likely welcome the development of more pickups, says Garrett Nelson, a stock analyst at CFRA Research who tracks autos.“Automakers have had such success in the light-duty truck category,” he says. “Automakers have done their research, and they’re willing to take a chance at introducing these news types of models.”The biggest risk, he says, is that buyers don’t like the look of the Santa Cruz, which bears a resemblance to the long-discontinued Subaru Baja and the still-on-sale midsize Honda Ridgeline.“It’s a different-looking vehicle than others on the road,” Nelson says. “It will certainly turn some heads. At the same time we think they’ve done their research and they’re comfortable making that investment.”You can follow USA TODAY reporter Nathan Bomey on Twitter @NathanBomey and subscribe to our free Daily Money newsletter here for personal finance tips and business news every Monday through Friday morning.

When will more ‘plus-up’ payments arrive? Nearly 700,000 catch-up checks this week went to people who qualify for more stimulus money
Honda to phase out gas cars, aiming for 100% electric vehicles in North America by 2040
To Top
error: Content is protected !!
Top