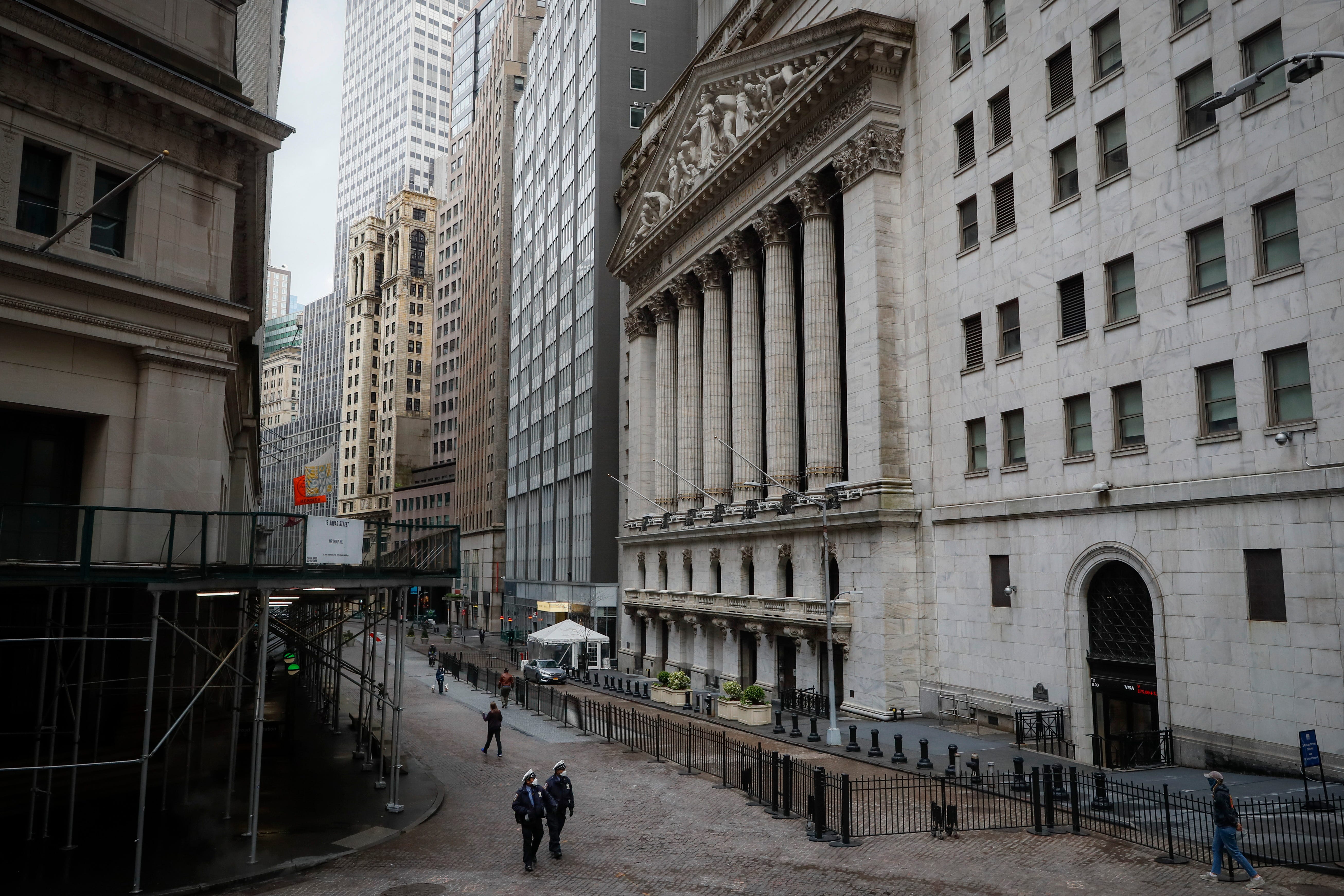 Jessica Menton
USA TODAYPublished 1:48 PM EDT Jun 29, 2020Stocks bounced back Monday following last week’s selloff as investors weighed a resurgence in coronavirus cases and the possibility of further lockdowns with hopes of more monetary stimulus.The Dow Jones industrial average climbed 500 points to kick off a shortened holiday trading week, following a more than 700-point drop Friday. The Standard & Poor’s 500 rose 1.3%, after shedding more than 2% last week. Despite the steep losses, the S&P 500 index is still on pace for its best quarter since 1998. On Monday, Dow component Boeing rallied 10% after the aerospace giant received clearance from the Federal Aviation Administration to begin test flights for its grounded 737 MAX after two fatal crashes last year. Test flights could begin as soon as Monday.Facebook slumped 1% as it deals with a defection of advertisers tired of the violent posts spreading through the social network. Starbucks on Sunday became the latest big company to say it will pause its advertising on social media.Global markets elsewhere were subdued as rising virus cases caused some governments to backtrack on pandemic reopenings, or to warn they might have to. The worry is that the worsening levels could choke off the budding improvements in the economic activity, even with the Federal Reserve and other central banks pumping unprecedented amounts of aid into the economy.A dream home, a vintage school bus and quirky roller skates: Here’s what couples are buying with their pandemic wedding fundsOuch!: COVID-19 is forcing some people to put retirement on holdInvestors look ahead to the June unemployment report, out Thursday instead of Friday due to the July 4 holiday. Economists forecast the Labor Department will report a 3 million increase in jobs after an unexpected 2.5 million jump in payrolls a month earlier, according to Bloomberg. Although fewer Americans are seeking unemployment benefits, the number who need help remains high as 47 million Americans have made initial jobless benefits claims in just 14 weeks.“While the latest jobless claims data showed some stability, the overall picture remains bleak,” Peter Cardillo, chief market economist at Spartan Capital Securities, said in a note. “The drop in the number of workers receiving benefits is encouraging, but the total number of workers still on the receiving line is indicative of a very poor labor market ahead.”Wall Street awaits fresh consumer confidence and manufacturing data later this week for signs of whether the U.S. economy will continue to recover after shutdowns following a pickup in May.Data released Monday showed pending home sales surged 44.3% in May from a month earlier, according to the National Association of Realtors, marking the biggest one-month gain in history for the survey since it began in 2001.Investors have been banking on businesses continuing to reopen, helping to drive a recovery from the worst global downturn since the 1930s Great Depression. But progress has been halting. Wall Street saw a selloff Friday after Texas and Florida reversed course and clamped down on bars again in the nation’s biggest retreat yet. The new coronavirus has surged back in many places, especially the South and West.Concern has deepened as the number of confirmed cases topped 10 million, with more than 500,000 reported dead from COVID-19, according to a tally by Johns Hopkins University. Such data is thought to understate the problem due to issues with testing and a large number of asymptomatic cases.The stock market is likely to remain volatile as traders weigh such ups and downs in the trajectory of the pandemic, analysts say.“Markets are attempting to figure out exactly what the new norm will be given the threat of further outbreaks when attempting to lift lockdown measures,” Joshua Mahony, senior market analyst at IG Group, an online trading provider, said in a note.The number of confirmed new coronavirus cases per day in the U.S. has surpassed 40,000 for three straight days, according to the Johns Hopkins tally, eclipsing the mark set during the deadliest stretch in late April. Deaths and hospitalizations have been rising in parts of the country, especially in the South and West.The yield on the 10-year Treasury inched up to 0.64% from 0.63% late Friday. It tends to move with investors’ expectations for the economy and inflation.In energy markets, the benchmark for U.S. crude oil for August delivery rose 19 cents to $36.68 per barrel in electronic trading on the New York Mercantile Exchange. It fell 23 cents on Friday. The international benchmark for oil, Brent crude, gained 16 cents to $41.09 per barrel.Asian markets extended declines, and shares were up slightly on Monday in Europe after a measure of economic sentiment increased. Germany’s DAX edged 0.3% higher and the CAC 40 in Paris rose 0.1%. Britain’s FTSE rose less than 0.4%.In Asian trading, Tokyo’s Nikkei 225 gave up 2.3%, while the Hang Seng in Hong Kong dropped 1.0%. The Kospi in Seoul fell 1.9% and Australia’s S&P/ASX 200 gave up 1.5%. The Shanghai Composite lost 0.6%.Contributing: The Associated Press