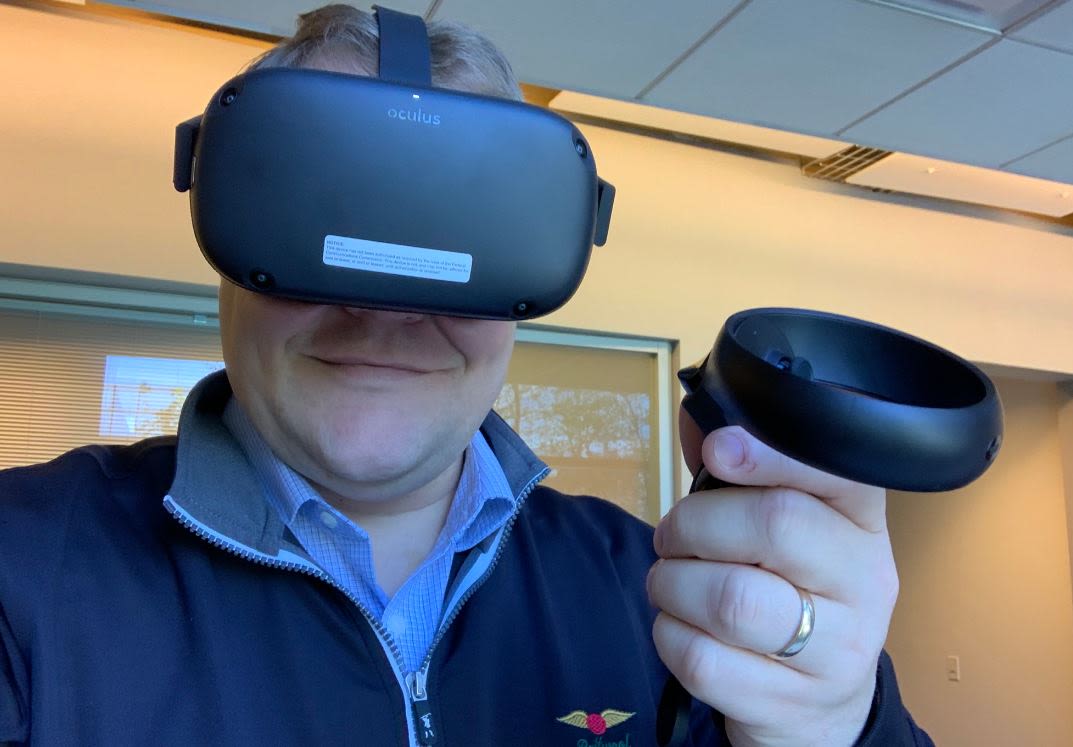 The Facebook Oculus Quest VR headset is comfortable and easy to use.

Five years ago, Facebook bought Oculus for $2 billion. It was a risky bet for Facebook, which was acquiring a company that had only sold prototypes to developers.

Since the Oculus Rift launch in 2016, the product still seemed like a silly hobby for PC-gaming enthusiasts instead of a product that normal people will want to buy. But now, after having used one of the company’s new headsets for a few days, I’m starting to see VR’s potential as a go-to entertainment product that can appeal to people of all ages.

During its F8 developer conference on Tuesday, Facebook announced it is taking preorders for two of its new virtual reality headsets that were announced last year, the Oculus Rift S and the Oculus Quest. Each costs $399 and will be available on May 21.

I’ve been testing the Oculus Quest. Unlike the Rift S, it doesn’t require a computer to work: You just put it on your head, grab the controllers and go.

It offers much more than the $199 Oculus Go from last year. That entry-level device doesn’t even let you walk around inside your virtual environment, for instance.

At $399, it’s still expensive for most people, who don’t yet know much about VR. But it’s proof that Facebook is on the way to making a mainstream product that can appeal to millions of people in a way most companies can’t. It’s starting to look a lot more like Facebook’s big bet on Oculus will eventually pay off.

Here’s what you need to know about the Oculus Quest.

Facebook said it spent a lot of time making the Oculus Quest easy to pick up and play. And that’s exactly how it works.

You just put the headset on, grab the controllers and, using an on-screen interface and the headset’s external cameras, set up a “Guardian” play space in the real world. Unlike earlier VR headsets, you don’t need to set up separate sensors around your room to keep yourself safe and inside a digital boundary.

You create a Guardian by quickly drawing a line on the floor with the controller — it takes just a few seconds. This prevents you from knocking into furniture or other objects while you’re playing. If you approach these boundaries while you’re playing, a red wall appears so that you know not to walk further. If you cross that wall, the device’s cameras turn on and you can see the real world around you. This allowed me to avoid a TV set or coffee table that was in the way.

The Oculus Quest will support about 50 titles at launch. I was able to test about half of them during my review period. Despite the lack of a computer, the Oculus Quest runs some of the popular games that a more powerful Rift S headset does, like Beat Saber — an addictive game where you use light sabers to hit colored objects flying at you as you play along to the beat of a song.

Most surprisingly, however, was how easy other people found the Oculus Quest to use. My mother-in-law, father-in-law, and other family members who have never used VR or even modern gaming systems were quickly able to jump into a game called Sports Scramble. We spent hours over the weekend playing virtual reality baseball and bowling and had a lot of laughs as each person took a turn.

Sports Scramble lets you play a variety of sports like tennis, baseball and bowling. It’s a bit like a Nintendo Wii Sports game from a few years ago, but with better graphics and silly experiences — like batting with a fish or a pool noodle during a baseball game — that all ages can enjoy. Even though the games are cartoonish, I really felt like I had left my real-world environment and been transported somewhere else, into a digital stadium playing baseball, or onto a digital lakeside to fish.

The Oculus Quest is comfortable to wear, but a few folks I used it with said their eyes started to feel strained after about 30 minutes inside the headset. This didn’t bother me since I’m used to staring at video games much longer than they are. Also, the freedom of movement alleviates some of the nausea you can get from cheaper headsets, since you can walk toward objects — one step in the real world is one step in the virtual world. In other words, it feels much more like walking in the real world does.

The $40 carrying case is a must-buy and I wish it was included with the Oculus Quest.

There are lots of games to try, and a few other apps, like Fox Now for watching TV shows or Red Bull for sports clips. I found that full 360-degree video was still too low-res to enjoy, and I wish apps like Hulu and Netflix were available, as they are on other Oculus products. These games were free on the loaner unit Facebook gave me but will cost anywhere from a few bucks to more than $20 depending on the app you want to buy.

There’s enough room for storing apps. Facebook loaned me a 64GB unit that I didn’t fill up, but newer games might eventually take up more space. There isn’t a microSD card slot to add your own, so consider the 128GB model if you want as much storage as possible.

Battery life was adequate. I usually got tired of the experience before the three hours of run-time expired, and it only takes two hours to charge it fully using the included USB-C charger. So it always had a charge whenever I wanted to use it. I also love that it turns off when you remove it for your head, and turns right back on again when you’re ready to play. It’s portable, too.

The $399 price tag was fair for the headset and controllers, which felt high end and should cost more. The headset didn’t fog up on me during use as last year’s $199 Oculus Go does. There’s a $40 optional carrying case — I think it should be included — that everyone should buy.

While multiplayer gaming is supported by some of the apps, everyone would need a separate headset to play against one another, which would be expensive. But that’s Facebook’s idea. It wants virtual reality to be a social experience that people can enjoy together. Nobody I know owns a VR headset yet, since products have been too expensive for most people. But now that the Rift S and Quest are launching at more affordable prices, maybe that will start to change.

There’s one way for groups to enjoy the experience together right now, but it’s buggy. A feature called Cast, still in beta, let me stream what someone was viewing in the headset to a Google Chromecast or iPhone. It crashed several times when I tried this on my iPhone, unfortunately.

The library is pretty limited for a $400 device. There will only be 50 apps at launch. More will come, and developers will be more willing to build additional experiences if millions of people end up buying the Quest. Still, I worry that the price is too high for more than just early adopters right now, which is unfortunate because I think the Quest still has a lot to offer.

Also, while there are a lot of really fun games, Facebook still needs to get developers on board to create the “killer app” that draws people in to the platform. I dream of the day there’s a big open-world World of Warcraft-type experience where I can jump in and play a game with thousands or millions of people.

We’re getting there, and it’ll come to something like the more powerful Rift S first, since it has the extra muscle of a computer to help power those worlds — but we’re not there yet.

Racket Fury — I lost to a robot in ping pong.

One other personal note. This wasn’t the fault of the device, but using it felt lonely at times.

On Saturday night, I stayed back to work on this review and found myself losing in a game of pingpong to a robot while my family was out at the bar watching a live band. It was depressing. It’s something to keep in mind — choosing these digital worlds means we miss out on what happens in the real world. If you are already bothered by the amount of time you spend on your phone and other devices, this is even more isolating. It could get better down the road, when more people have these devices and you’ll be able to play with them in the virtual world.

Should you buy it?

Well, yes, because I want more people to play with. But this is really for people who want to experience a full-fledged VR system and who know that there will be a limited library of games at launch. If you want a more robust experience, get the Rift S, which connects to a computer and can do a lot more but isn’t as portable. I don’t think you’ll regret buying either one.

In the book “Ready Player One,” the main character, Wade, owns a stand-alone headset that can be worn anywhere. The Oculus Quest seems like a very early version of that sort of headset, and probably on purpose. According to Business Insider, Mark Zuckerberg gave all of the Oculus employees a copy of the book, which suggests this is his vision of where VR is going.

As costs come down and as more people begin to see the stunning potential of a VR experience that can take you from our world into another one, headsets like the Oculus Quest will grow in popularity. Facebook is at the forefront of this industry, while others like Microsoft and HTC require computers for their products to operate. Facebook stands to win big when that happens.