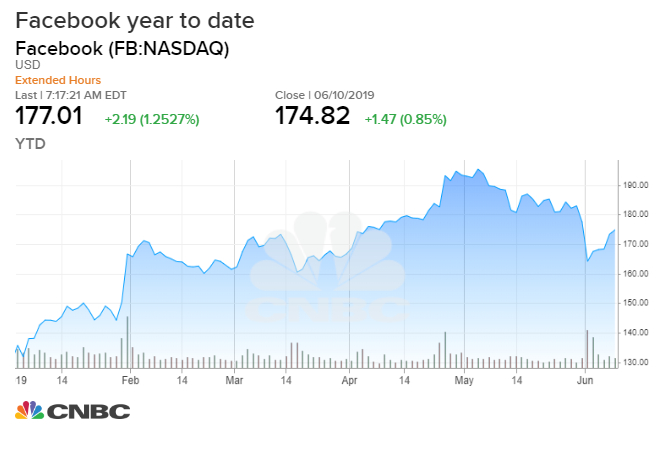 Even though shares of Facebook have fallen sharply on headlines about regulatory scrutiny, Moffett Nathanson said Tuesday the stock’s valuation is attractive given the health of its core business and potential for growth.

Recent talk of the breakup of big technology companies has worried investors. Last week, Facebook shares plummeted when The Wall Street Journal reported that the Federal Trade Commission is investigating the tech giant’s practices on digital competition. Facebook was also brought into the spotlight around a House Judiciary Committee investigation regarding similar issues.

Nathanson said antitrust actions on Facebook seem unlikely, considering “the focus of U.S. courts on proof of consumer harm.” “We believe holding platforms liable for user content is the larger threat, but there have not been meaningful developments around this issue,” he said.

Although unlikely, Nathanson said, regulatory scrutiny is already priced into Facebook’s stock, but future growth opportunities are “not yet captured” in Facebook’s share price.

Commerce and messaging are turning into “growth drivers long-term,” he said. Organic growth declaration has moderated because of better-than-expected monetization of Facebook Stories, and margins are “set to stabilize after two years of heavy investment,” he said.

Moffett Nathanson upgraded the stock to a buy rating from neutral and maintained its $210 price target. The stock was up 2% Tuesday, trading above $178 share.

Facebook shares are up more than 33% year to date, but the stock is down 7% in the last month.

— With reporting from CNBC’s Michael Bloom