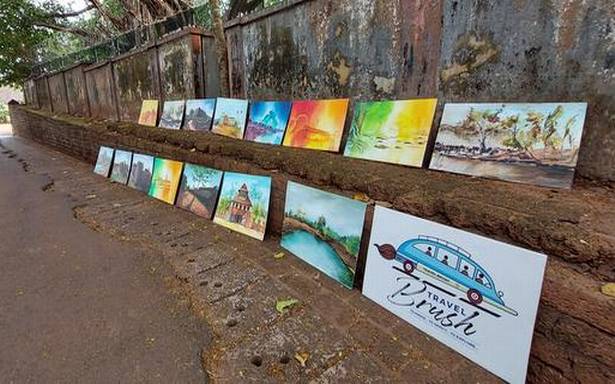 Travelling in a car, they are funding the journey by holding roadside exhibitions and selling their works

On a breezy evening on the famous Muzhappilangad drive-in beach in Kannur, visitors watched curiously as four men arranged paintings on the shore. Taking stacks of canvases from a brown car parked nearby, they propped up works that depicted Bekal Fort, St Angelo Fort, Madayipara, Dharmadom and so on. A signboard that read ‘Travel Brush, karyangal ini colour aakkatey’ (let things become colourful) was put up on the car.

Four artists from Kerala are on an all-India trip to explore and capture the sights on their canvas. A scene from Muzhappilangad drive-in beach in Kannur

“We are travelling from Kasaragod and soon we will go to Wayanad. We hope to travel by car through all the states in India,” says a bearded man, who identifies himself as Vipin Iritty, an artist who does mural work and interior design for a living.Four artist friends from Kasaragod, Kannur and Kochi in Kerala dreamt of a trip to learn more about India, her artisans, villages and people. During the lockdown, when the art world came to a halt, the four got time to firm up their plans. On March 14, Vipin, Shaiju K Maloor, Chandran Mottemmal and Benny Devasy, started their journey from Malik Deenar Juma Masjid mosque in Kasaragod.Pieces of the countryTravelling in a Renault Kwid, the foursome drove down through Kannur and Mahe, before their stop at the beach en route Wayanad. Though vloggers and travel buffs have photographed and filmed many of the well-known places in the country, the artists believe that not many have captured it on canvas like they plan to do.Four days later, Vipin can’t stop talking about the trip to Wayanad where they stayed in an Adivasi colony, painted, held painting workshops for the children and conducted an exhibition of their works. They hope to fund their travel by selling these paintings of the places they have visited.

Four artists from Kerala are on all-India trip explore and capture the sights on their canvas. In Wayanad, they stayed in an Adivasi colony, painted, held painting workshops for the children and conducted an exhibition of their works
| Photo Credit:
Special arrangement

Shaiju says with a laugh that it was not easy for them to organise their travel on a shoe-string budget. So, they do their own cooking and stay in places of worship if they are allowed to. The Lions Club has promised to help them in Kerala.“Before we enter Tamil Nadu, we want to visit every district in Kerala and paint at least two monuments of that place. The car is a little cramped for us and so we are exploring if we need to invest in another vehicle. In Thiruvananthapuram, our intention is to organise an exhibition-cum-sale,” says Vipin.They say that their families are supportive though all four have taken a break from their work. Every day, time has been kept apart for painting, cooking and organising art workshops and exhibitions. If possible, they hope to meet artists in the places they take a break at.“We are aware that there will be challenges but isn’t making a dream come true worth the troubles? We have made a leap of faith and we are confident that we would be able to do it even if it takes time,” asserts Vipin.

This Korean dance-fashion show is where tradition meets modernity
In Hyderabad’s Shrishti Art Gallery, a touch of humour and satire
To Top
error: Content is protected !!
Top