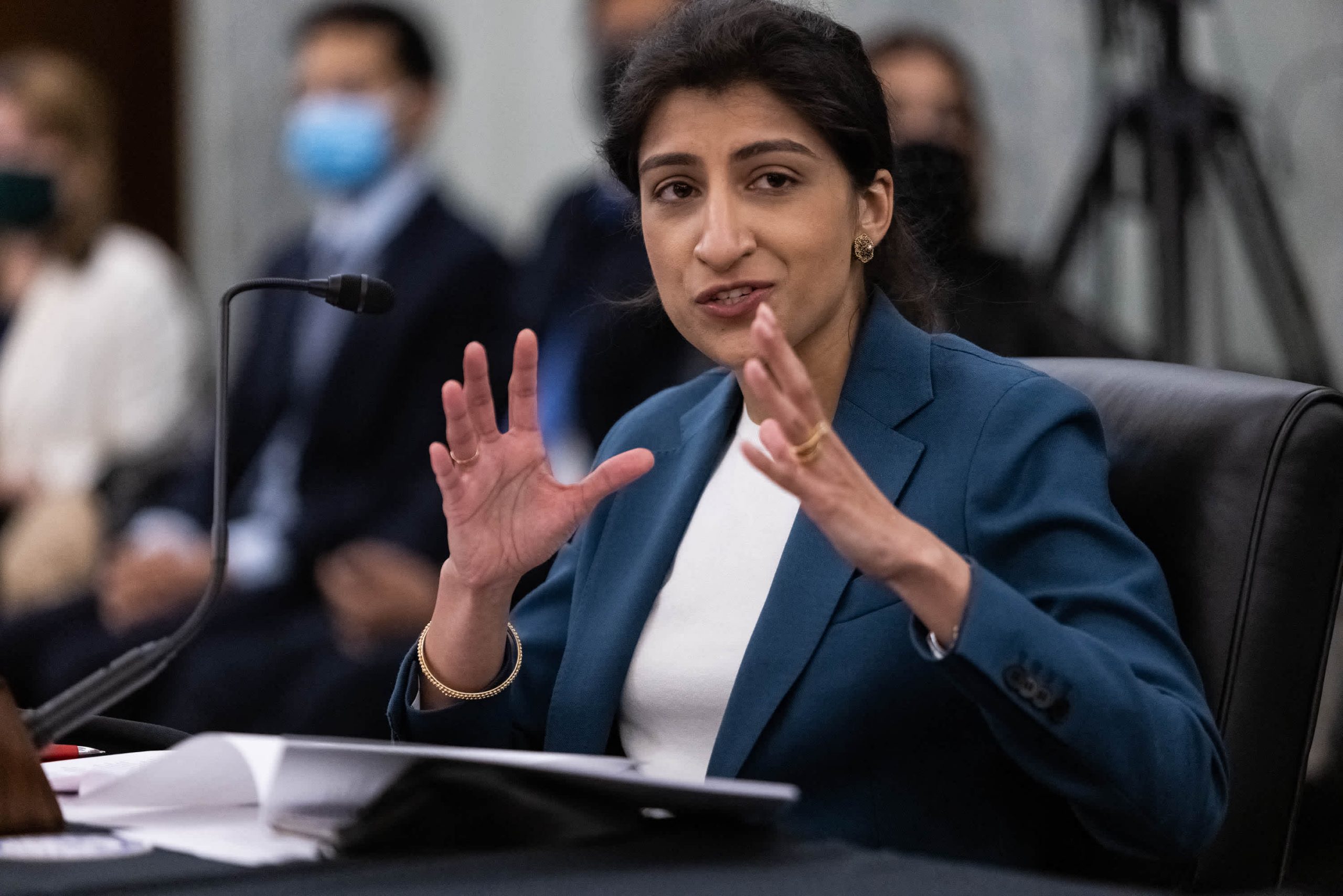 FTC Commissioner nominee Lina M. Khan testifies during a Senate Committee on Commerce, Science, and Transportation confirmation hearing on Capitol Hill in Washington, DC, April 21, 2021.Graeme Jennings | AFP | Getty ImagesThe Federal Trade Commission filed a new antitrust complaint against Facebook on Thursday, continuing its fight in federal court after a judge threw out its initial claims.Facebook has until Oct. 4 to respond to the FTC’s amended complaint. FTC Chair Lina Khan notably did not recuse herself from the vote on the complaint after Facebook petitioned her to do so based on past critical statements of the industry. In a press release, the agency said that its Office of General Counsel “carefully reviewed Facebook’s petition to recuse Chair Lina M. Khan. As the case will be prosecuted before a federal judge, the appropriate constitutional due process protections will be provided to the company. The Office of the Secretary has dismissed the petition.”The commission voted 3-2 to bring the complaint, meaning that Khan’s participation was crucial to continue the case in federal court. In a dissenting statement, Republican Commissioner Christine Wilson said her participation in the vote should not be mistaken for a judgement call on the recusal petition, saying she would apply relevant law to the facts if the commission were to review the petition. Facebook shares were slightly positive Thursday afternoon. The company said in a statement on Twitter that it would soon have a response to the amended complaint.U.S. District Judge James Boasberg gave the FTC a second chance to bring its claims that Facebook has illegally maintained a monopoly after dismissing its first complaint in June.Boasberg wrote that the FTC failed to define a plausible market that Facebook monopolized and suggested too loose of a percentage of market share it owned. Plus, he wrote, the FTC lacked authority under its chosen statute to bring charges against Facebook for how it implemented an old policy preventing rivals from accessing its platform seven years ago.Boasberg said in order to receive an injunction under that statute, it must be clear that a violation is in progress or about to occur.The new complaint is longer than the original, clocking in at 80 pages compared to 53. But in broad strokes, it maintains the core arguments of the original, including allegations that Facebook used anticompetitive acquisitions of Instagram and WhatsApp to further its monopoly power and that it also unfairly blocked rivals from accessing its application programming interface (API).The updated complaint maintains the same definition of the market that Facebook has allegedly monopolized. The FTC calls that market that of personal social networking services. The agency claims such services are unique for their combined use of social graphs to map user connections, features made for users to interact with personal contacts rather than broadcasting information widely and features for users to find one another.Similar to the earlier version, the FTC claims that interest-based social platforms like LinkedIn or fitness app Strava do not fit that mold, nor do platforms primarily used for streaming video like YouTube. Unlike the previous version, this complaint calls out TikTok as an example of a platform that does not fit the definition of a personal social networking service, calling it instead, “a content broadcasting and consumption service.”Still, it seems to address some of the judge’s criticisms of the initial complaint. For example, the new version of the complaint describes Snapchat as “the next-largest provider of personal social networking services in the United States.” Though the FTC described Snap in its earlier complaint as a company that has drawn Facebook’s “competitive attention,” the judge had criticized the FTC for failing to explicitly call out other rivals in the market who were not either defunct or extremely small. The FTC’s explicit inclusion of Snapchat in the relevant market seems to address that issue.As another example, in describing how the API access policy was allegedly anticompetitive, the FTC says Facebook “made a deliberate decision to sacrifice the benefits that cut-off apps would otherwise bring to Facebook, including ad spend,” in favor of maintaining its monopoly. The judge had previously written that the FTC would have to show that Facebook implemented the policy to the detriment of its own short-term profits.The judge also dismissed in June a similar lawsuit from a coalition of state attorneys general in June, but declined to give them the same second chance as the FTC. New York Attorney General Letitia James, who led the coalition, said they would seek to appeal the ruling.This story is developing. Check back for updates.Subscribe to CNBC on YouTube.WATCH: How US antitrust law works, and what it means for Big Tech