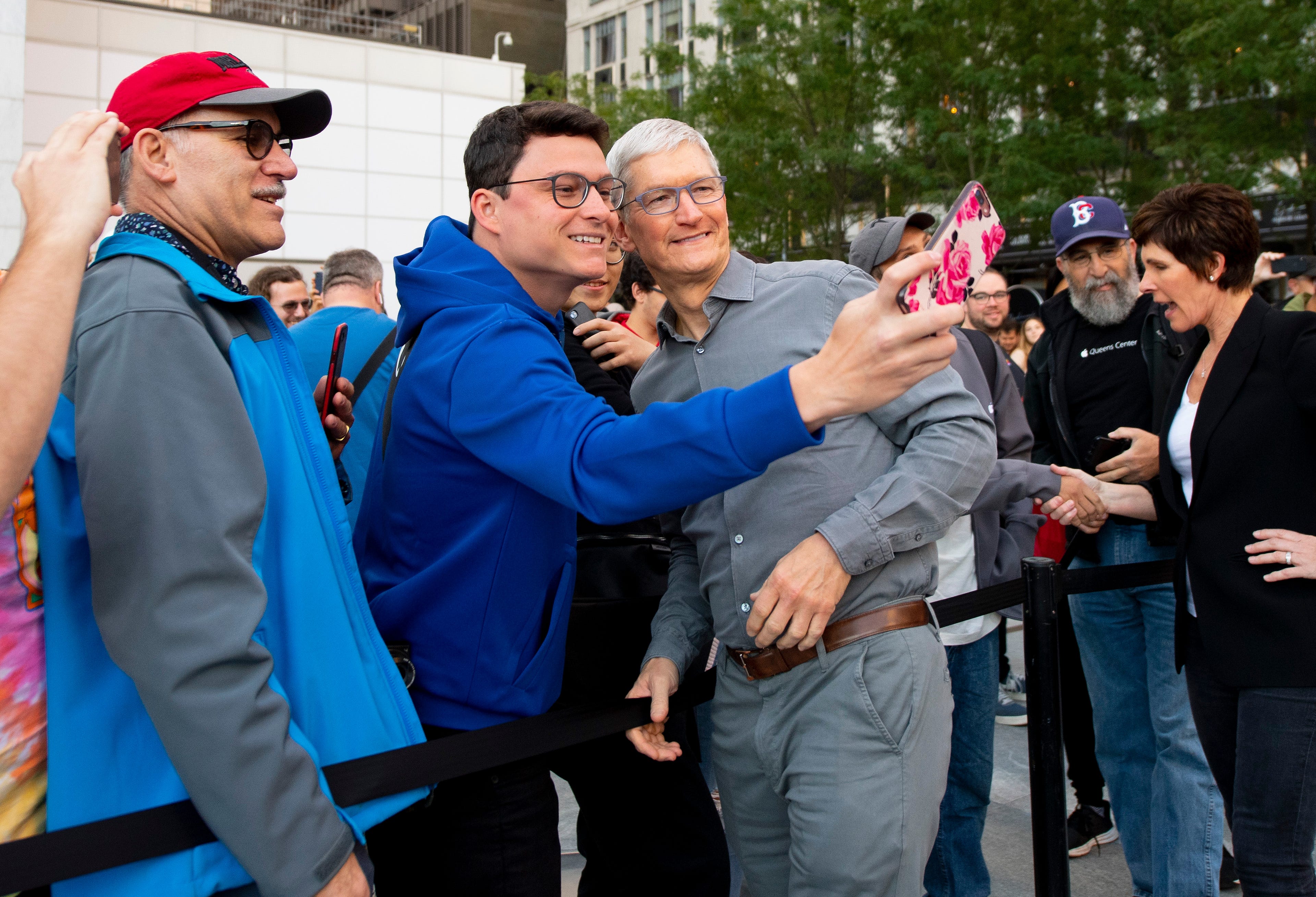 NEW YORK — A beaming Apple CEO Tim Cook greeted the first eager buyers of the new iPhone 11s on Friday at the grand reopening of the company’s flagship store on New York’s Fifth Avenue, across the street and steps from Central Park. The store had been closed for remodeling since January 2017.

With Apple employees leading the cheers, and the company’s new retail chief Deirdre O’Brien by his side, Cook took selfies with a number of customers who would walk past the luminous glass cube and down through a spiral staircase to the store.

Cook continued to pose with customers inside.

Asked to comment on the proceedings, Cook let out a big smile and said, “I love it, I love it,” adding “it’s the best” when talking about the cameras on the latest handsets.

Though crowded, the queue of buyers around the store on iPhone launch didn’t exactly stretch for blocks as in past years, when some people literally hung out for days. The crowds also appeared to be more subdued, at least until they were pumped up Apple’s sales staff.

Of course, customers can preorder iPhones without having to ever show up in person. And for all the ongoing interest in Apple’s latest iPhones, as well as the Apple Watch Series 5 smartwatches that also went on sale, these devices, by now, are mature (albeit upgraded) products.

Ryan Romero was the first person to emerge from the store with a new iPhone — a gold iPhone 11 Pro Max that matched the color of his Apple Watch. Romero says he got in line at 6 p.m. on Thursday, camping out ahead of the store’s 8 a.m. opening on Friday.

His efforts to land new Apples ahead of everyone else have become something on an annual ritual for Romero, 24, since it’s the fifth time the admissions counselor at the University of Las Vegas has lined up in advance of a store opening. The previous four times were back home in Vegas. He decided to fly to New York to experience the grand reopening at one of Apple’s most iconic stores.

“The moment I walked down the stairs I started to tear up because of the energy in here,” he said. “It’s something that you really can’t experience except for Apple on launch day.”

Romero reckons there were 50 or so people waiting with him until around midnight when the crowd started to double. “It did grow very quickly,” he says.

Another buyer, Irem Diver, 22, is a student from Turkey. But she spent the summer working in New York. Before flying home, Diver decided to replace her four-year-old iPhone 6 and its cracked screen with a newly minted iPhone 11.

She’s anxious to try Face ID facial recognition; her older phone still has Touch ID via the Home button that has disappeared from Apple’s more recent handsets. “I don’t know how I’m going to get used to it,” she said.

Diver arrived at the store with a friend around 3 a.m. Friday, when the line was roughly 50 people deep, she estimates.

She was especially star-struck by seeing Cook and took a video of him, though she didn’t get to be in a selfie with him.

The iPhone 11, 11 Pro and 11 Pro Max, represent generally marginal upgrades to their features compared with last year’s models, but reviewers, including yours truly, have praised the devices for their terrific new cameras, and longer battery life.

Casper is having a flash sale on their most popular mattresses right now
12 things you need to get your home ready for winter
To Top
error: Content is protected !!
Top