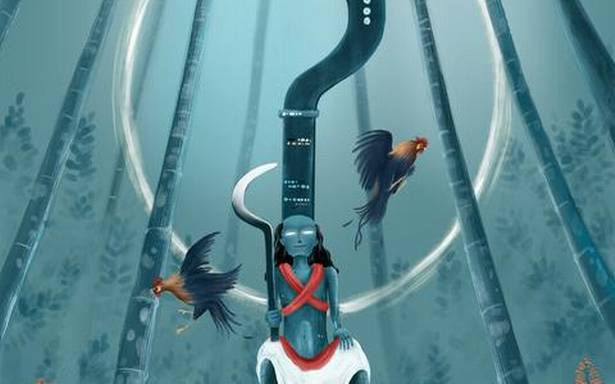 Palakkad-based artist Vimal Chandran reimagines characters from Kerala folklore in a sci-fi setting for his new digital series, drawn from a child’s perspective

It is like a half-remembered dream. A sickle-wielding oracle, a school-going boy, a cluster of areca nut trees and leaping roosters on either side. Artist Vimal Chandran plucks memories from a childhood in Palakkad and places them in a world where extra-terrestrial creatures rise from the seas and descend from the skies.When the pandemic hit last year and Vimal moved from Bengaluru back to his hometown in Kerala, he was reacquainted, after a break of 15 years, with village folklore, myths, temple characters and superstitions he had heard as a child. These vivid visuals creep into his ongoing art series, Folk SciFi. “I am reimagining characters from our native traditions in a Science Fiction environment. These are unreal stories about real people in real places,” he says. The artworks are 12-second animations, blinking like glitches in the matrix to ominous music. The colours — dreamy and surreal — stay in the spectrum of blues and greys.In The Visit, Vimal tells the story of Pootham, a poltergeist who goes from house to house looking for a little boy he has become attached to. Performing artistes in Kerala enact this character, visiting homes in villages after the summer harvest, and it is the memory of meeting one such ‘Pootham’ on a summer evening by the river Nila that Vimal captures.

The Visit by Vimal Chandran

In his rendition, the Pootham hovers miles above the boy and his mother, as if broken away from a passing UFO. This perspective — of a large mythical creature gazing down on a child — carries forward in all the works; whether it is the enormous wooden horses of Kuthira Vela or the character of Darike, from the traditional theatrical battle between Darike and Kali. “As a child, these characters would seem scary and fascinating to me at the same time. There was always a certain level of apprehension seeing their painted faces and unusual appearances but at the same time they were so vibrant and majestic that I could not stop looking at them,” he says.Vimal brings back those memories in the style of magic realism, clubbing it with his interest in sci-fi — something that bloomed as he fell in love with the Russian magazine Misha in a communist-leaning Kerala of the 1980s and ‘90s.

Four of the seven artworks have been released and sold so far, as NFTs, on WazirX marketplace. “I wanted to tell unique stories from my native land, stories that have been passed down for generations,” says Vimal. “These are 4,000-year-old tales on the blockchain for the first time, and that is interesting to me because once up there, they will live forever.”A big believer in the NFT space, he says that creating an NFT makes it easier to tokenise and sell authentic copies of his digital artwork. “I am not limited by the 2D canvas, I can explore animations and sound, and collaborate with different artistes. Also, traditionally, I would not have had control over my artwork once I sold it. But this way, I can track the secondary sales too and get royalty for it each time,” he says. “Whoever has started investing in it, is already ahead of the curve.”