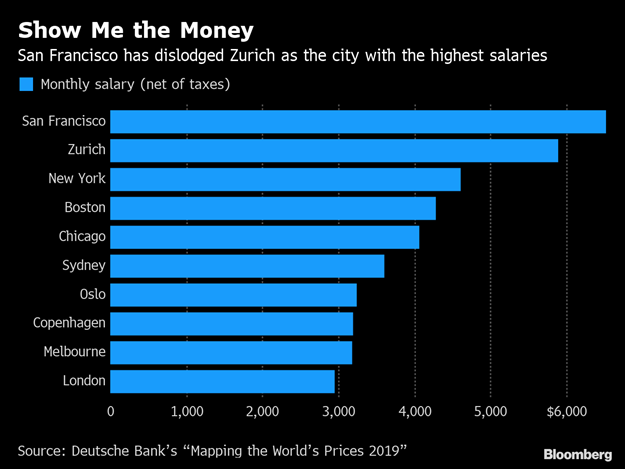 Looking for a bump in salary and lifestyle? Then try San Francisco.

The US West Coast city has soared up the rankings to dislodge Zurich for the highest salaries and disposable income after rent, according to Deutsche Bank’s ”Mapping the World’s Prices 2019.”

Over the past five years alone, San Francisco has risen 7 and 21 places on both gauges.

”Whilst its cost of living is increasing each year and rising up the cost rankings on most measures we cover, it still lags major global capitals. In terms of 2-bed rents however, it is only behind Hong Kong.”

Much of the shift is down to the dollar’s surge over the past half decade, which has helped inflate the position of US cities versus global peers. The greenback is up 20% versus the euro and 23% against sterling in the period.

Zurich hasn’t relinquished all of its territory. The Swiss city tops the survey for quality of life and is number one, or close to it, for the cost of goods and services.

It also remains the most expensive city to go on a date.

”Zurich is again the place to find a long-term partner early in life and persuade them to stay at home at night, eat in, watch the telly and save your high disposable income or risk seeing it erode away on your partner,” according to the report.

For the survey, Deutsche Bank converts prices for products and services around the world into dollars, and mostly uses crowd sourcing for input data. It also looks at average salaries, meaning megacities will be higher up the rankings because they have more people on higher salaries. 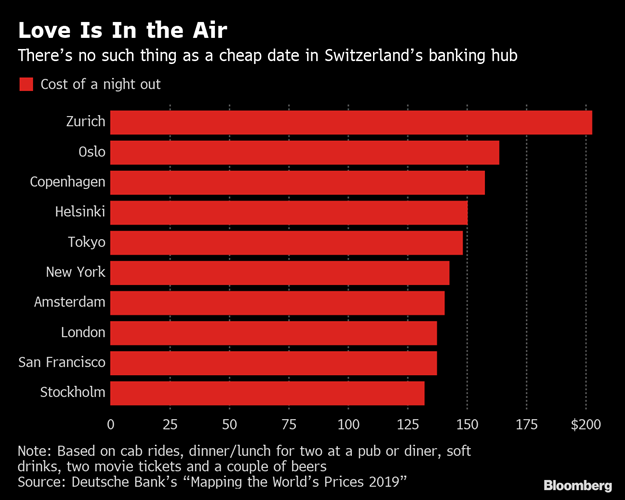 When it comes to cigarettes and beer, Deutsche Bank’s ”bad habits” index shows Melbourne has toppled Oslo as the most pricey city, followed by Sydney, Auckland and Dubai.

For those who do go on a date in Zurich, it pays to stick to beers.

According to the report, this is a rare area where the Swiss city is ‘relatively’ cheap, ranking 19th out of 54 in terms of expensiveness.

Zimbabwe to subsidise public transport as inflation accelerates
Fuel in Zimbabwe will now cost over R20 a litre
To Top
error: Content is protected !!
Top