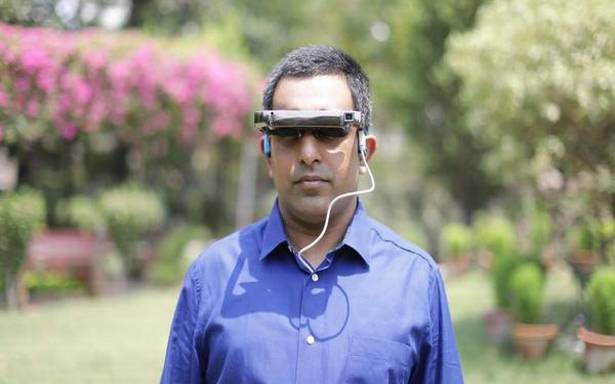 Ahead of World Sight Day on October 8, we speak to photographers with vision impairment who use the lens to interact with the world

A strip of cloud cut across the sun, over a grand old dormant volcano in Mauritius — a beautiful setting for a picture, thought Pranav Lal, on honeymoon with his wife Sacheta. Being born blind has not stopped this Delhi-based cyber-security specialist from choosing photography as his hobby. Pranav is in fact one among a number of amateur photographers with visual impairments in India. “The thrill of taking photographs for me is my desire to perceive what I can’t touch. Landscapes, the sky and its clouds, faraway hills and mountain peaks with snow,” says Pranav.

A view of the city, mountains, and the sky from Mauritius Sports Council, photographedby Pranav Lal

He perceives beauty through the sense of sound, using a software, vOICe vision technology that facilitates an augmented reality on his pair of glasses. “It is like an artificial eye, and it works on two levels,” explains Pranav. “First, it takes live camera views and translates them to a defined set of sounds.” So images are converted into stereo sound by scanning them from left to right — the brighter the object, the louder the sound; the greater the elevation, the higher the pitch. “The second level uses neuroscience. The sound gets converted into electrical impulses in the brain. Your brain cells don’t care where they are getting that data from. When it receives that data, the specialised neurons re-recruit themselves for vision,” he says, explaining how he sees in illusory flashes. “Once I see what I like, I press click on my smartphone camera.”

A view of the sunlit sky, captured by Pranav Lal

The contrast in light is why he loves taking pictures of landscapes and structures. “Water especially gives you a lot of scope to play with reflections. If the light falls on it differently, it will be an entirely different picture.”Current bionic eyes place such microelectrodes near the optical nerve to create visuals inside the brain. Mumbai-based Bhavesh Patel however uses no advanced equipment for his photography. Yet, he is India’s only fully blind photographer to have shot commercial projects.

Bhavesh has always been interested in the creative fields, especially Art. “I studied in a school in Worli until I was 15, and I remember there was this art gallery nearby. I would go with my uncle and he would visually describe what was there in those paintings.”In 2009, he had his first tryst with photography, thanks to a group Blind With Camera, helmed by photographer Partho Bhowmick. “He introduced me to a basic Kodak camera. We clicked pictures of the pigeons in Dadar. Whenever they flapped their wings, we would point and shoot.”

A black-and-white photograph capturing the play of light, by Bhavesh Patel

Capturing imaginationWhen Bhavesh had those developed pictures described to him, it took him back to his childhood memories with his uncle. “It captured my imagination,” he says.From that first photo of the pigeons taking flight, he moved on to take pictures of Katrina Kaif for Lux, and got paid for it. “That was mostly done with the help of other sighted photographers, who adjusted the lighting and the environment. I had to sense where she was positioned and what she was doing, and click according to that,” he says. However, for Oppo, the shoot was more dynamic. “We travelled to different locations in Delhi to capture different scenarios with an Oppo smartphone.”

Under Blind With Camera, many others like Bhavesh have been experimenting with photography as a hobby. Its founder, Partho, claims to have introduced the camera to over 1,500 Indians with visual disabilities. The group also raises awareness by holding workshops for the sighted in which they are blindfolded and taught to use the camera by people with vision impairments.One such workshop held in Hyderabad was with Mercedes-Benz, for potential buyers. Vivek Yeralkar, from the group, acted as the mentor, instructing students to use their sense of sound to capture pictures of cars zooming on tracks at a speed of 90 kilometres per hour.

Staying focussedCompletely blind in one eye and with 10% vision in the other, Vivek used to be a photographer — he recalls the local awards he won with great joy — before he lost his vision due to retinal detachment in 1992. “Back then I was in Thane, working as an engineer. I would use Vernier callipers and micrometers, but one day I couldn’t see the readings properly.” Several visits to the doctor and a surgery did not help, and he moved back to his parents’ home in Pune. “That year I was very depressed. I had photojournalist friends and it was my dream to be a photographer too, par woh adhura reh gaya (it was left unfinished),” he says.After getting back on his feet with some computer training and learning to use screen readers, Vivek heard of a Blind With Camera workshop in Goa in 2010. Since then, he has been reacquainted with the lens. His favourite memory is that of the Kaas Plateau in Satara, where he went two years ago with his son. “There were flowers of so many colours, yellow, violet, orange.”

A picture of the flowers in a valley in Satara, taken by Vivek Yeralkar

Technology has helped him over the years, with most cameras now being equipped with autofocus. The screen reading phone too makes things a lot easier — especially in taking selfies. “Otherwise, before we would have to turn the rear camera and never know if the framing is right.”Pranav is a huge supporter of using better technology, not just to click pictures, but also to perceive them. “Right now, an exhibition for the blind would probably have audio descriptions. Or they have tactile (raised) pictures. But they are never enough to convey all the details in a photograph,” he says.This is why he prefers the vOICe vision technology to ‘look’ at pictures. “In fact, the whole reason I started photography is to check if others were looking at the same thing as I was,” he says.For Bhavesh, the draw of photography is this: “The more you focus on clicking a picture, the more aware you are of your surroundings, the better your judgement. You will understand the world a bit better,” he says. A photograph is a record, proof that you were there, with the world, at that moment in time.

Check out this WhatsApp-powered portable photo studio by a Hyderabad startup
Meet this Hyderabad artist who has initiated an Art Yagnam
To Top
error: Content is protected !!
Top