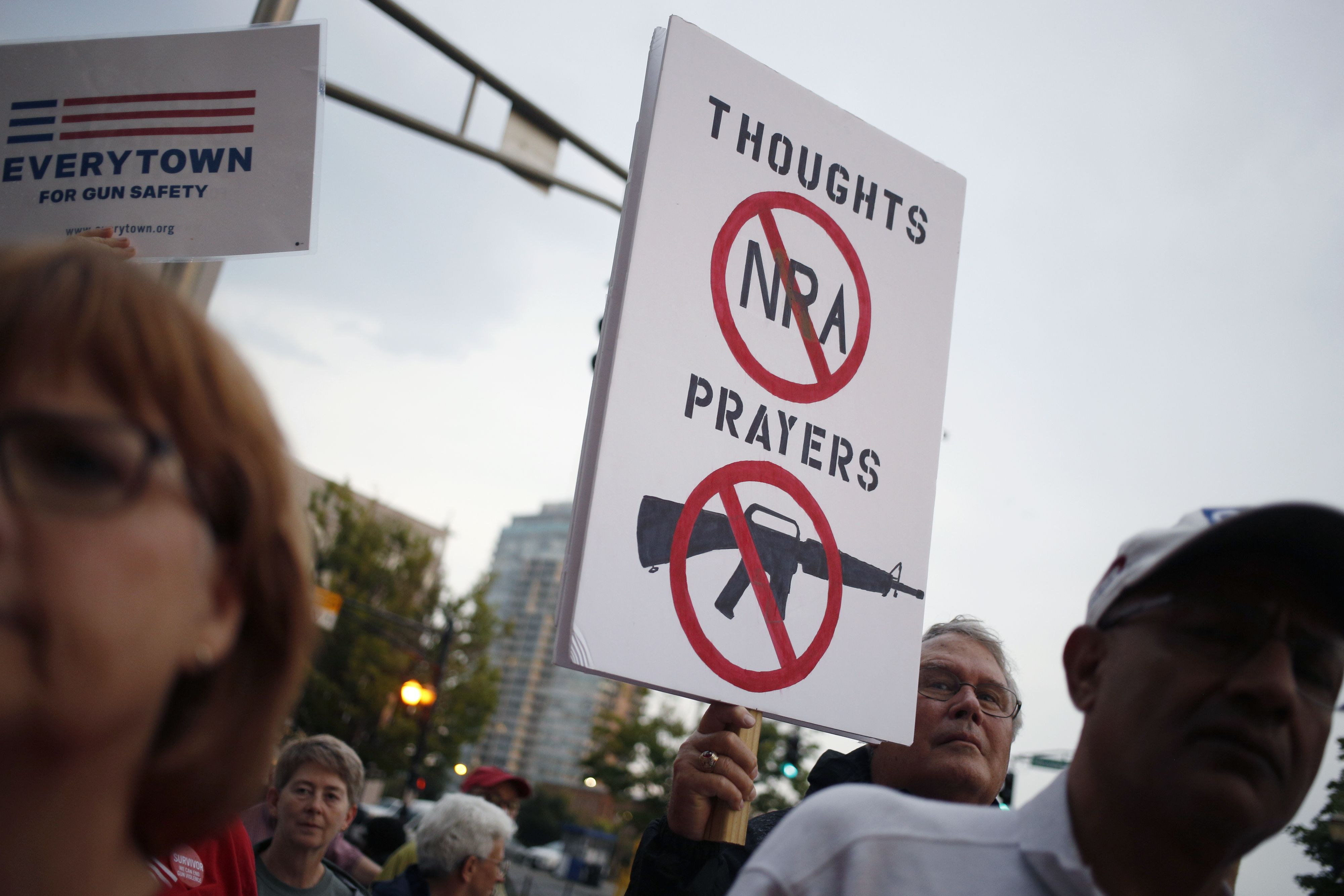 An activist holds a sign outside the office of Senate Majority Leader Mitch McConnell (R-KY) on August 6, 2019 in Louisville, Kentucky.

Mitch McConnell’s campaign Twitter account was unlocked Friday after several days in limbo over its posting of a profanity-laced video that threatened violence against the Republican Senate majority leader in the wake of the Texas and Ohio shooting massacres.

The account had not posted since Tuesday, when it tweeted a video of protesters outside the Kentucky senator’s home, one of whom says “just stab the mother—- in the heart” and fantasizes about McConnell breaking his neck.

The protests, which called for him to take action on gun control, were a response to the mass shootings over the weekend in El Paso, Texas, and Dayton, Ohio, that killed 31 people.

Twitter said the account would be locked until the campaign deleted the video. But the account became active again midday Friday, posting a message declaring “victory,” and the video in question became visible again.

Twitter maintained in a statement from its communications account Friday that the video was “a clear violation of the Twitter rules,” but said the company had reconsidered its decision to lock Team Mitch based on the campaign’s intent in posting it.

“After multiple appeals from [other] affected users [who posted the video] and Leader McConnell’s team confirming their intent to highlight the threats for public discussion, we have reviewed this case more closely,” the company said. “Going forward, the video will be visible on the service with a sensitive media interstitial and only in cases where the Tweet content does not otherwise violate the Twitter Rules.”

McConnell campaign manager Kevin Golden praised Twitter’s decision to unlock the account, but criticized the company’s earlier move. “It is still deeply concerning that Twitter would ban us from posting a video of threats made against us but allow Liberal Hollywood celebrities to post exactly what we did without suffering the same penalty,” Golden said.

“It shouldn’t have taken an avalanche of outrage from across the country to stop Silicon Valley from launching an effort to silence conservatives like the Majority Leader of the United States Senate in the first place.”

Golden added that Twitter must not take similar action again in the future. “We look forward to learning more about what steps Twitter will take to ensure that this egregious suppression campaign never happens again.”

The NRSC and NRCC are organizations dedicated to electing GOP senators and members of Congress, respectively.

The RNC and Trump campaign had collectively planned to spend $300,000 to $500,000 on Twitter ads in August, depending on the ads’ performance, according to a person familiar with the matter.

The NRSC had spent in the low five figures on Twitter this campaign cycle, according to spokesman Jesse Hunt. The NRCC declined to comment on how much the organization spent on Twitter ads.

Twitter did not respond to a question from CNBC about whether Republican groups’ decision to pull ad spending influenced its decision to unlock the Team Mitch account.

However, the RNC and Trump Campaign will not resume spending on the platform, the RNC said.

“The suspension of the Team McConnell account was especially egregious, but it was just the latest in a long line of instances of unequal treatment of conservative voices on the site,” RNC Chief of Staff Richard Walters said in a statement. “We need to hear further explanations as to why this keeps happening and assurances from Twitter that they are addressing these biases before we continue spending money on their platform.”

The NRSC and NRCC did not immediately respond to CNBC’s requests for comment on whether they would resume ad spending on Twitter in light of the reversal.