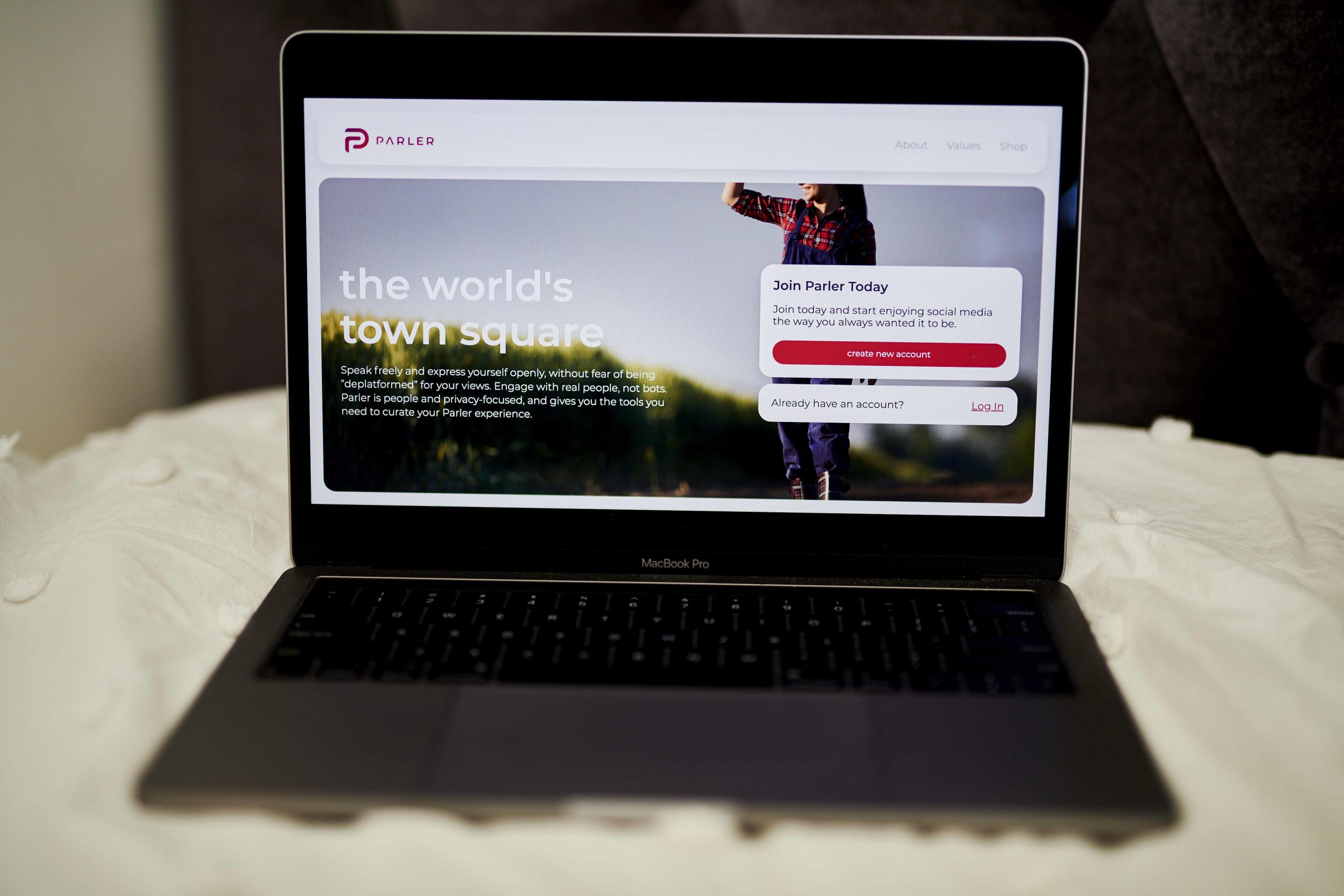 The Parler website home screen on a laptop computer arranged in the Brooklyn borough of New York, U.S., on Friday, Dec. 18, 2020.Gabby Jones | Bloomberg | Getty ImagesThe website of Parler — a social media platform popular with conservatives and supporters of President Donald Trump — is back online, albeit in a very limited form.Unlike for much of last week, the website now loads and displays a brief message from Parler CEO John Matze that reads: “Hello world, is this thing on?”The Parler website dropped offline on Jan. 11 after Amazon withdrew its support in the wake of the deadly U.S. Capitol riot. The website was reliant on cloud computing power provided by Amazon Web Services.AWS withdrew its support for Parler on Jan. 10 after concluding that posts on the company’s website and apps encourage and promote violence.”It is clear that there is significant content on Parler that encourages and incites violence against others, and that Parler is unable or unwilling to promptly identify and remove this content, which is a violation of our terms of service,” said an AWS spokesperson.They added: “We made our concerns known to Parler over a number of weeks and during that time we saw a significant increase in this type of dangerous content, not a decrease, which led to our suspension of their services.”Matze said in a statement that Parler removed violent content and added that its community guidelines don’t allow Parler to be knowingly used for criminal activity.The Parler mobile apps are still nowhere to be seen. Google and Apple removed the Parler app from their app stores on Jan. 8 and Jan. 9 respectively. Technical difficultiesWhile the Parler website is no longer completely offline, it’s still experiencing technical difficulties and Parler users can’t use it in the way that they did previously.Below Matze’s brief message is a post about the company’s ongoing technical difficulties.”Now seems like the right time to remind you all — both lovers and haters — why we started this platform. We believe privacy is paramount and free speech essential, especially on social media. Our aim has always been to provide a nonpartisan public square where individuals can enjoy and exercise their rights to both,” the post reads.It continues: “We will resolve any challenge before us and plan to welcome all of you back soon. We will not let civil discourse perish.”Parler has transferred its domain name to Epik, which hosts the similar social media network Gab, also popular with the far-right. However, finding a website-hosting provider has been more difficult for Parler.”Amazon’s, Google’s and Apple’s statements to the press about dropping our access has caused most of our other vendors to drop their support for us as well,” Matze said in a previous statement. In an interview with Fox News last Monday, Matze said the company may “have to go as far” as buying and building its own data centers.It remains unclear who is hosting the Parler website now and Parler did not immediately respond to CNBC’s request for comment.Amazon-Parler LawsuitParler has sued Amazon for withdrawing its support for the company. In a lawsuit filed Jan 11. in U.S. District Court in Seattle, Parler accused Amazon Web Services of breaking antitrust laws.”AWS’s decision to effectively terminate Parler’s account is apparently motivated by political animus,” the lawsuit said. “It is also apparently designed to reduce competition in the microblogging services market to the benefit of Twitter.”It continues: “This emergency suit seeks a Temporary Restraining Order against defendant Amazon Web Services to prevent it from shutting down Parler’s account. Doing so is the equivalent of pulling the plug on a hospital patient on life support. It will kill Parler’s business — at the very time it is set to skyrocket.”An AWS spokesperson told CNBC there’s no merit to the claims and Twitter declined to comment.

Twitter explains how it will transfer White House and POTUS accounts to Biden next week
Google defends its partnership with Facebook, denies states’ claim of anticompetitive advantage
To Top
error: Content is protected !!
Top