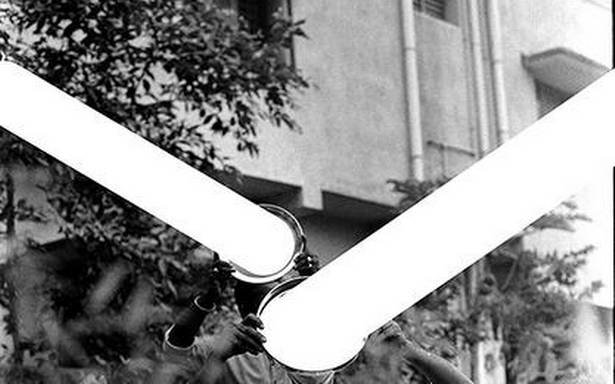 Photographer Madhavan Palanisamy on his latest black-and-white project, The Reflector

The sun throws mellow afternoon light through the windows. Dancing keyholes of lancet-shaped leaves outside form patterns on the tiled floor. Like an abstract painting. Like Chennai-based photographer Madhavan Palanisamy’s pictures.The 44-year-old award winning lensman has, in most of his projects, shot images that reflect the real world but cloaked them in a veneer of the fantastical and imaginative. His latest The Reflector, created over two days in October, is a tribute to the lightmen of Chennai.“They are cupids of light, agents of the moon, human boom-rods. They can climb any mountain top or tree or anything to reflect the light. A jovial bunch, they run around shouting instructions to their fellow-agents and responding ‘ready-sir!’ to the DOP or the photographer. These men are super-heroes in their own right. The Reflector is their story,” says Madhavan over phone.

Coimbatore-born Madhavan won Lensculture’s B&W Series award in 2019 (Lensculture is one of the most comprehensive and far-reaching resources for discovering contemporary photography talent around the world) for his work Appa and Other Animals, a tribute to the time spent with his late father, the famous writer and literary critic Kovai Gnani. Madhavan’s work that choreographs portraiture and documentary aims to create an empathetic link between viewer and subject, a reflection of his own journey with detours through a degree in Biochemistry and work in advertising before he found his calling in photography. He has since metamorphosed into portraiture, photographing celebrities, sustainable fashion and human stories.“The pandemic restricted travel and commercial jobs but also gave artists time to dwell on certain aspects of life that are often hijacked by conventional work. The award pushed me to work on telling more stories of ordinary folk,” he says.Which is how Madhavan came to tell the tale of the lightmen, who are among the silent sentinels of the film, television and photography industries, going about sets and studios lugging lights and strobes with an earnestness that ensures productivity. “They know how to shape the light and the mood, but with the industry shut down due to the pandemic, a lot of these men were without jobs, income or food. Even now, as the industry opens up slowly, they are unable to find a sustainable living. The jobs are high-risk, but most of them are not part of any union which makes it more difficult for them to find work. The Reflector is a part-docu, part-fantasy story about these men who use their dinner plates to reflect the light and bring attention to their condition,” he adds.Madhavan shot the series on film using a Rolleicord TLR camera, a 60-year-old antique for the square pictures, and a more modern Contax G2 for the horizontal pictures. He rounded up old faithfuls — some like Ramesh Kumar, a darkroom printer and photographer had taught him in his early years. Some like “well-known lightmen Mohan and Mohaideen, fondly called bhai had brought their team for the shoot. Suresh, who runs the studio Setfire, Pandian and Vasu who work there, and Amal, a freelance assistant, were also part of the project”. The 20 people who featured were shot at abandoned sets, on sand heaps and atop sliding boards and staircases. Some had crowns and wings superimposed on them. Others had billboards for faces. But the one object that linked them was a dinner plate — that shone like the sun, the moon’s reflection in a puddle, a beam of light from a lighthouse, and as the ardour of a man who knows he holds the light to illumine a good picture. The pictures shot in black-and-white were processed by Karthik Thorali at Madras Atelier. The result is a surreal, palpable portrait of a community — obscure yet recognisable, familiar yet enigmatic.

Film photography makes a comeback as more dark rooms crop up across India
Breaking the patterns of the 90s and 2000s: the 15th season of Odessa Fashion Week
To Top
error: Content is protected !!
Top