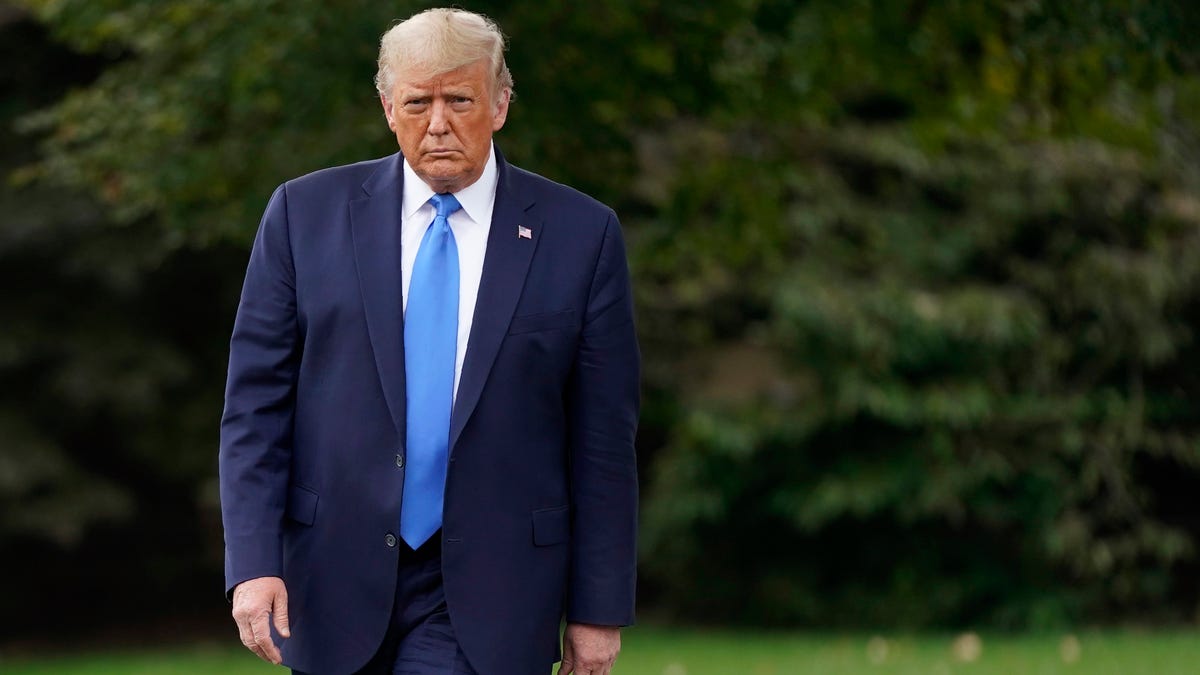 | USA TODAY
COVID-19: Trump’s doctor avoids questions on oxygenPresident Trump’s doctor said Trump is not currently on oxygen, but would not say whether he ever received oxygen since his COVID-19 diagnosis.President Donald Trump previously reported he earned capital gains from Regeneron Pharmaceuticals and Gilead Sciences Inc., the manufacturers of two of the medicines he’s taken as part of his COVID-19 treatment plan.According to a 2017 financial disclosure form filed with the U.S. Office of Government Ethics in June 2017, Trump had a capital gain of $50,001 to $100,000 for Regeneron Pharmaceuticals and $100,001 to $1 million for Gilead Sciences Inc. The form notes the information was of April 15, 2017.Trump’s subsequent disclosure forms, including his 2020 form signed July 31, did not list Regeneron or Gilead. Trump received a single 8-gram dose of Regeneron’s polyclonal antibody cocktail as a precautionary measure, according to his physician Sean Conley. The antibody cocktail is in four late-stage clinical trials, and its safety and efficacy have not been fully evaluated by any regulatory authority, the company said on its webpage.Save better, spend better: Money tips and advice delivered right to your inbox. Sign up hereAs part of Operation Warp Speed, New York state-based Regeneron won a $450 million federal contract in July to manufacture and supply the company’s antibody cocktail REGN-COV2.The New York Times reported Friday that Regeneron’s chief executive, Dr. Leonard S. Schleifer, a member of Trump’s golf club in Westchester County, New York, said Trump’s medical staff reached out to the company for permission to use the drug and the Food and Drug Administration cleared it.Mask compliance: Now that Trump tested positive for COVID-19, will shoppers be more compliant with mask mandates at stores?Trump COVID-19: President’s diagnosis raises questions about what to do if your boss won’t wear a mask”All we can say is that they asked to be able to use it, and we were happy to oblige,” Schleifer told the Times, calling it a “compassionate use” case. Trump isn’t the first patient to try the experimental treatment outside of the clinical trial through compassion use.“When it’s the president of the United States, of course, that gets – obviously – gets our attention,” Schleifer told the Times. Regeneron stock rose $19.20 a share in after-hours trading.Trump also is taking Gilead’s remdesivir, which has been authorized for COVID-19 patients by the FDA under an emergency use declaration. Trials showed effectiveness under some circumstances.Remdesivir received a guarded endorsement in April from Dr. Anthony Fauci, director of the National Institute of Allergy and Infectious Diseases at the National Institutes of Health, when it was announced as a new tool in the fight against the virus at a presidential new conference.What to know about remdesivir: Trump given remdesivir to fight his COVID-19 infectionAnti-mask movement: Trump’s COVID-19 diagnosis is not slowing virulent anti-mask movement on FacebookIt was unclear Saturday whether the president currently has any direct holdings in Regeneron and Gilead but it appears he still has a stake in hydroxychloroquine, a drug he repeatedly touted as a treatment for COVID-19 despite warnings about its effectiveness.Trump’s latest financial disclosure form does report his family trusts’ investments in a Dodge & Cox mutual fund. A New York Times article in April said the fund’s largest holding is thought to be in Sanofi, the pharmaceutical firm that is one of the major producers of hydroxychloroquine.Hydroxychloroquine is an arthritis medicine that also can be used as a preventive or treatment for malaria, a red blood cell infection transmitted by a mosquito bite, according to the Mayo Clinic.Contributing: Michael Collins, Grace Hauck, Chris Woodyard, Nicholas Wu, Sean Rossman, John Fritze, Adrianna Rodriguez, Elizabeth Weise and Karen Weintraub, USA TODAYFollow USA TODAY reporter Kelly Tyko on Twitter: @KellyTyko.

Google’s Chromecast no longer “niche” product and ready for prime-time
The best early Prime Day deals you can shop at Amazon
To Top
error: Content is protected !!
Top