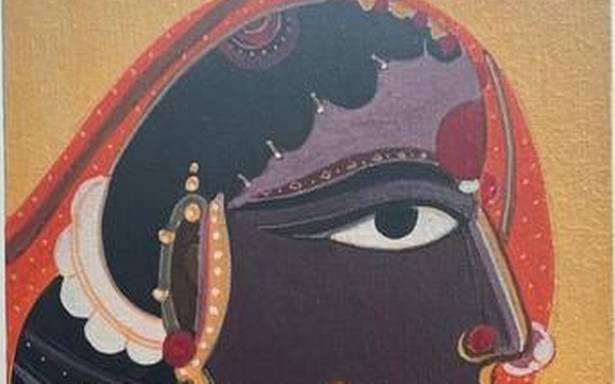 You can’t just see Yasala Balaiah’s work and move away; his vibrant stories of Telangana village life compel art lovers to linger and find an emotional connect. The passing away of this 81-year-old artist, popularly known as ‘Batik Balaiah’ on December 24, leaves a huge void in the Telangana art scenario. Village life

A former teacher from Siddipet, Balaiah’s frames were rustic, rooted in a village atmosphere. His surroundings were his muse — a village couple dressed in traditional attire, men and women working in the fields, shepherds and Bathukamma festivities painted in crimson reds, yellows and green. It was his artistic tribute to the place and people he grew up with. “When you are in a village, can a farmer and a goat be missed? Rythulu (farmers), mekalu (goats), eddulu (bull)…; I draw what I have seen in my village,” he had said to the writer during an exhibition held in Hyderabad nine years ago.

A recent work by Yasala Balaiah who passed away on December 24,2020

Balaiah’s son Yasala Prakash mentions that his father painted right until he was admitted to hospital two months ago due to kidney ailments. Balaiah had earlier launched two books, Line Drawings and Batik Chitra Kala, and was keen to do a book on acrylics. “We got him canvas and colours so that he could paint,” adds Prakash. In Siddipet, the octogenarian used to paint in a small room adjacent to the main hall in his house which was converted into a gallery to display works. Village life continued to be his theme but the form of the subjects changed slightly. “When we told him the people in his paintings looked big with broad faces and hands, he used to measure the body composition to show they were in proportion,” recalls Prakash. Role model

Balaiah’s another son Raju Yasala mentions his father had used only red and white in his recent artworks. “Maybe he was conveying the onset of the pandemic,” he wonders. Recalling Balaiah’s three visits to the USA, Raju, a software engineer working in California recollects, “When people from Telangana living in the US met my father at exhibitions, they felt nostalgic. His paintings connected them to their roots. He was a role model for many of his students and meeting him in person was an emotional moment.” The women in Balaiah’s works were versatile, eco-friendly and multi-skilled — working in the fields, cooking, carrying kids and wood. For instance, a YouTube video created by Raju shows Balaiah’s artwork depicting a typical woman from the Dasari community. Carrying her baby fastened to her waist with a cloth, and dressed traditionally, complete with bangles and turmeric on forehead, she holds a water carrier made of dried bottle gourd shell and also an empty white cloth to get food from households in exchange for the baskets she has made.

Work hard, never waste even a minute and be nice to others were Balaiah’s mantra in life. He ensured that his four sons learnt gardening, sold leafy vegetables from their backyard garden and bought vegetables with the money they earned. “Now we realise he wanted us to understand the value of time and add value to the society,” says Raju. Their ‘coconut house’ in Siddipet is also unique; one can pluck coconut trees from the third floor balcony! “He ensured the coconut trees were not affected during the construction of they house,” adds Raju.Prakash, a the torchbearer of Balaiah’s legacy, admits he can never match up to his father’s style and sense of humour. He says, “He used to teach valuable lessons through simple statements. He would say, ‘Pedda eddu etu pote, chinna eddu atu potundi (the bull calf follows its elders) meaning the younger generation will only follow the older generation in the family.” The sons also hope to release a documentary on his life by 2021. Rest in peace Yasala Balaiah.