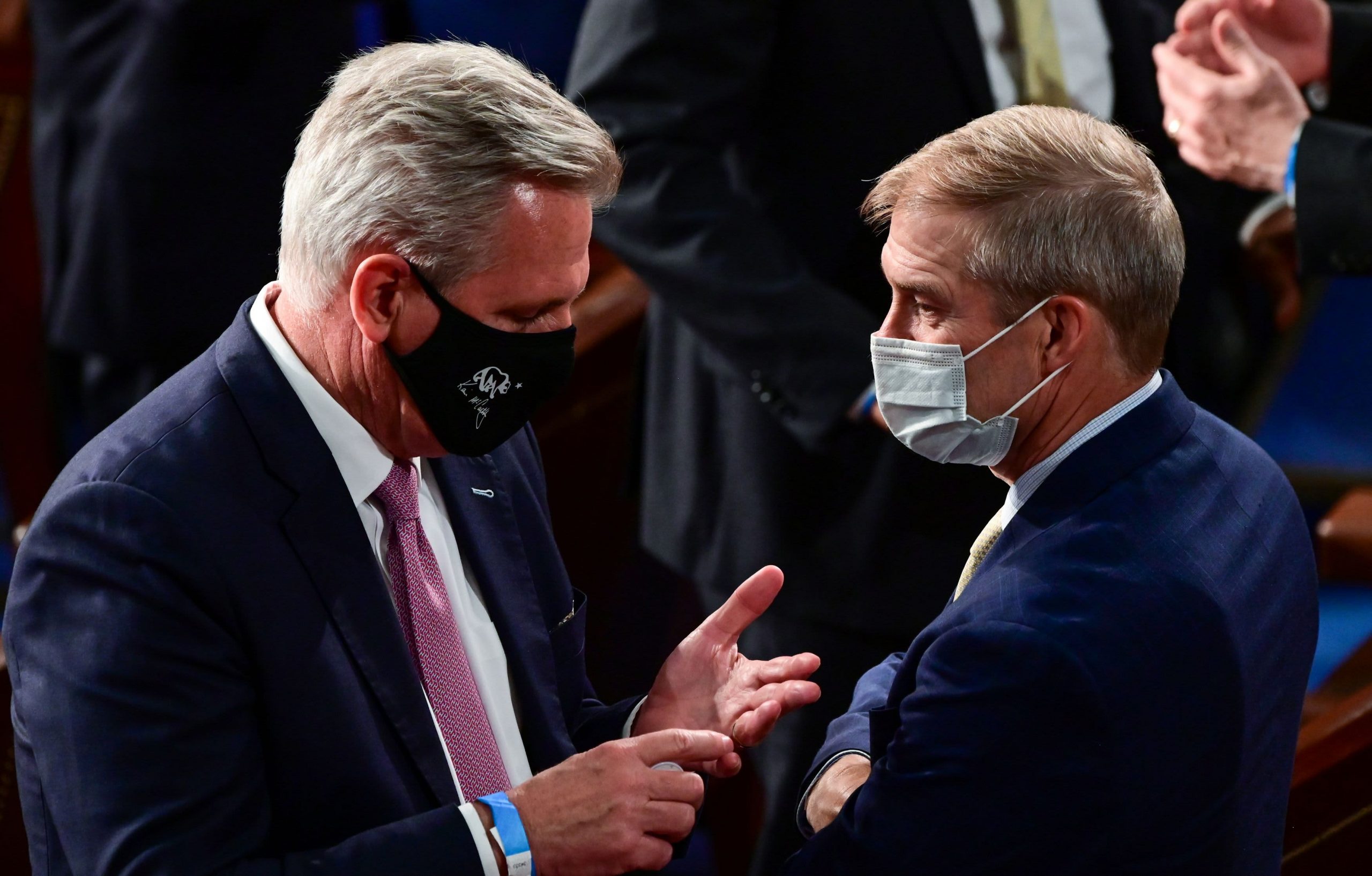 Republicans on Wednesday escalated their threats to clamp down on tech giants after Facebook’s oversight board upheld the company’s decision to ban former President Donald Trump’s Facebook and Instagram accounts.House Minority Leader Kevin McCarthy, R-Calif., vowed to “rein in big tech power over our speech,” while other GOP lawmakers and allies of Trump went further.”It is time that we break up big tech, not just regulate them,” Trump’s former chief of staff Mark Meadows said on Fox News after the board issued its ruling.Trump, who is out of office but remains a dominant presence in Republican politics, declared in a statement that “corrupt social media companies must pay a political price, and must never again be allowed to destroy and decimate our Electoral Process.”The decision to uphold the former president’s suspensions — at least for now — could impact the GOP’s messaging as it aims to retake majority control of the House in 2022 on a platform of pro-Trump populism.Trump was suspended from numerous online platforms in the wake of the deadly invasion of the Capitol on Jan. 6 by a mob of his supporters. In its ruling Wednesday morning, the oversight board said that Trump “violated Facebook’s rules prohibiting praise or support of people engaged in violence” with his posts on that day — including when he addressed the rioters in a video by saying, “We love you. You’re very special.”The board also criticized Facebook for making Trump’s ban “indefinite” and gave the company six months to review the matter and “decide the appropriate penalty.”After being impeached in the House for inciting an attempted insurrection and later acquitted in the Senate, Trump now has most of his party’s backing and is openly weighing a 2024 White House run. He is also teasing the launch of his own rival media tools.Republicans and Democrats alike have previously called for greater oversight and regulation on Big Tech, an industry that has drawn perennial concerns about antitrust, privacy, national security and a number of other issues. Sen. Elizabeth Warren, D-Mass., for instance, advocated breaking up Amazon, Google and Facebook during her 2020 presidential bid.But the decision to keep the muzzle on Trump, who has never conceded to President Joe Biden and who continues to falsely assert the 2020 race was stolen from him via widespread fraud, divided lawmakers along partisan lines.Republicans decried the move to “silence” the former president and accused Facebook and its oversight board of political bias.”Facebook is more interested in acting like a Democrat Super PAC than a platform for free speech and open debate,” McCarthy wrote on Twitter, which has also banned Trump.”If they can ban President Trump, all conservative voices could be next. A House Republican majority will rein in big tech power over our speech,” the GOP leader tweeted.”Facebook’s status as a monopoly has led its leaders to believe it can silence and censor Americans’ speech with no repercussions,” said Rep. Ken Buck, R-Colo., a member of the House Judiciary Committee, in a statement. “Now more than ever we need aggressive antitrust reform to break up Facebook’s monopoly,” Buck said.Rep. Jim Jordan of Ohio, the judiciary panel’s top-ranking Republican, was even more blunt.”Break them up,” he tweeted.Sen. Marsha Blackburn, R-Tenn., called the move “extremely disappointing,” adding: “It’s clear that Mark Zuckerberg views himself as the arbiter of free speech.”Democrats, meanwhile, supported the board’s ruling.”I applaud that decision. Facebook is not the public square,” House Majority Whip Steny Hoyer, D-Md., told The Washington Post.”Donald Trump is no voiceless victim,” said Sen. Richard Blumenthal, D-Conn. “He richly earned his suspension from Facebook by spreading dangerous, violence-inciting lies.””Our nation is still living with the consequences of the deadly insurrection Donald Trump incited, and there is a clear and present danger that he will do it again,” he said. “The decision by Facebook’s self-funded panel upholds a minimal marker for truth and decency.””Facebook must now decide what it values more: profits or holding Donald Trump accountable for espousing hate, disinformation, and violence,” Blumenthal said.Warren tweeted, “Trump should be banned for good” but stopped well short of giving kudos to Facebook.”Facebook is a disinformation-for-profit machine that won’t accept responsibility for its role in the safety of our democracy and people,” Warren’s tweet said.The company “will continue to fumble with its power until Congress and antitrust regulators rein in Big Tech,” she tweeted.Rep. Adam Schiff, D-Calif., pushed back on Republicans’ free-speech arguments.”There’s no Constitutional protection for using social media to incite an insurrection. Trump is willing to do anything for himself no matter the danger to our country,” Schiff tweeted.”His big lies have cost America dearly. And until he stops, Facebook must ban him. Which is to say, forever.”Trump, a prolific social media user, is also among its biggest critics, long accusing the companies of bias against him and calling for their legal protections to be stripped away.In his final weeks in office, Trump urged Congress to repeal Section 230, a decades-old law that shields tech companies from being held liable for what users post on their platforms. He even went so far as to tie the issue to the passage of a bipartisan defense spending bill and to the passage of a round of coronavirus stimulus checks.Conservatives and other critics of major social media sites have in recent years championed alternative platforms. People in Trump’s orbit have recently teased the possibility of Trump soon unveiling his own offering.”In the next two to six weeks you will see a ramp up of additional platforms,” Meadows said Wednesday on Fox.Trump is “fully engaged now about taking back the House and Senate in 2022,” the former chief of staff said.Meadows added that “there will be rallies that happen very soon.”