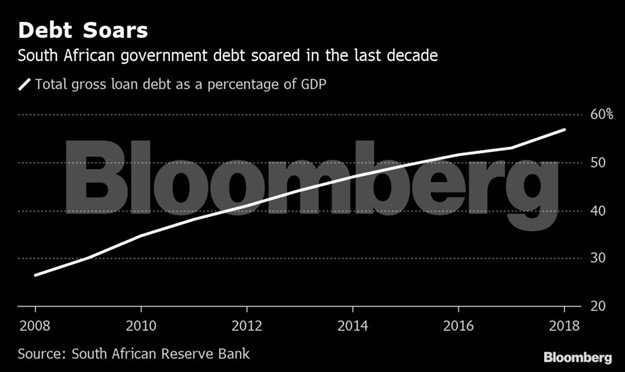 Lesetja Kganyago, then the top official at Treasury, was taking a break at Sugarloaf Mountain in Rio de Janeiro between two G-20 meetings in November 2008 when he got the bad news.

Barely three years after South Africa had managed to get its highest-ever investment-grade ratings from two of the three main credit-rating companies, the global financial crisis was threatening to reverse that progress. South Africa was one of multiple emerging markets in the companies’ cross-hairs.

“The three days’ holiday was not to be,” Kganyago, now head of the central bank, said on the 32nd floor of the bank’s headquarters in Pretoria.

“The policies that we had in place stood us in very good state” to respond to the 2008 global crisis, he said. In fact, the first downgrade didn’t come for another four years.

But it didn’t stop there. Under President Jacob Zuma, who arrived in 2009 and left office last year, corruption scandals, overspending, policy uncertainty and rising government debt have left South Africa with only one investment-grade rating.

The tools the government deployed in the 2000s to build buffers against external crises – a budget surplus, falling debt levels and policy certainty – are lacking today, said Lungisa Fuzile, chief executive officer of Standard Bank’s South African unit. He succeeded Kganyago as the Treasury’s director-general in May 2011.

“We had avoided moments where we could have lost our credit rating because of external macroeconomic shocks, because of deliberate – very deliberate – actions,” he said. The current more precarious state “was self-inflicted,” he said. 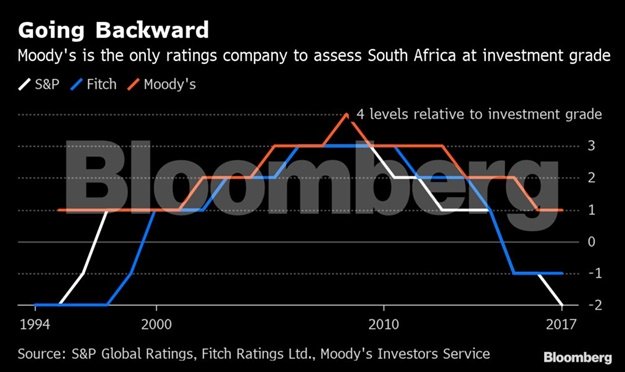 South Africa was well-prepared in 2008 because former Presidents Nelson Mandela and Thabo Mbeki didn’t want to repeat the financial troubles experienced by some African nations that achieved independence before South Africa’s 1994 transition to democracy. The two leaders were determined to avoid borrowing from the International Monetary Fund, Fuzile said.

“Once the world believed in South Africa and its commitment to sound macroeconomic management, it paid off handsomely,” he said. Yields on the country’s generic, rand-denominated 10-year debt, which date back to November 1999, more than halved by mid-2006 after peaking at 15.27% in May 2000. The economy grew for 42 consecutive quarters starting at the end of 1998. 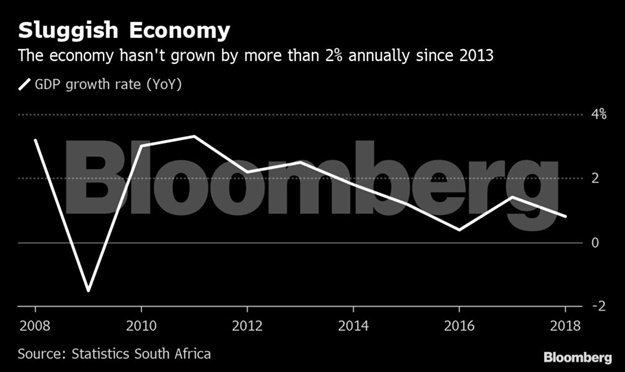 “For a long period of time, South Africa’s credit rating was preserved by the credibility that was earned in the earlier years. And the more we derived benefit from that credibility, the more reckless people were becoming,” Fuzile said.

Now, with that trust all but lost, President Cyril Ramaphosa’s new cabinet is battling to preserve the remaining investment-grade credit rating, from Moody’s Investors Service, in the face of a contracting economy, the biggest budget shortfall in 10 years and a power utility that needs billions of rand to keep the lights on.“I’m surprised that they haven’t downgraded us,” said Thabi Leoka, an independent economist.

“There are many signs that say we deserve it because we’re working very hard to ensure that we get a downgrade,” she added in jest.Losing its sole investment-grade assessment would push South Africa out of debt indexes including the FTSE World Government Bond Index, which according to the IMF could trigger forced outflows of around $1.5bn and push up borrowing costs even more. The country can’t afford to lose this rating because of how reliant it is on portfolio inflows to help finance the current-account and budget deficits, Leoka said.

What will it take for Ramaphosa’s government to avoid this, and be assessed as investment grade by other ratings companies again?

While the Treasury’s said the government’s main focus is to regain investment-grade status and make the country an “attractive investment destination,” it needs to do so with a sense of urgency, said Leoka. 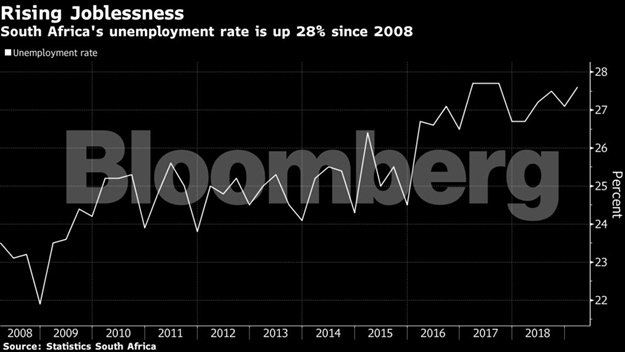 According to Estian Calitz, an emeritus professor at Stellenbosch University who was the director-general of the Department of Finance in the mid-1990s, the country needs decisive action against corruption, deliberate decisions to turn around state companies and better coordination of economic policy.

It will also take a fair amount of patience with ratings companies, according to former central bank Governor Chris Stals.

“There is no magic formula that any country can employ to influence these ratings,” Stals said. “The solution lies in appropriate political, social and macroeconomic policies.”

Fitch spokesman Peter Fitzpatrick referred to some of the company’s recent published reports when asked what it considers when assessing ratings. The firm said in May that weak reform momentum means that potential growth is likely to remain low and continue to weigh on South Africa’s rating.

Moody’s also resent some of its most recent analysis on South Africa and S&P didn’t immediately respond to emails seeking comment.

Ramaphosa will give his third state-of-the-nation address this week, the first since getting an official mandate by leading the ruling African National Congress to victory in last month’s election. While his moves to retain key ministers such as Tito Mboweni at finance and Pravin Gordhan at public enterprises drew praise from investors, boosting economic growth and stabilising government finances to regain the confidence will take longer, especially with Eskom in dire financial straits.

“Economic gains take a long time to come by,” Kganyago said. “They take a lot of very difficult trade-offs and many of those trade-offs are painful. And it is amazing: Once you have the gains people forget how hard it took to come to those gains and that losing them could be much faster.”