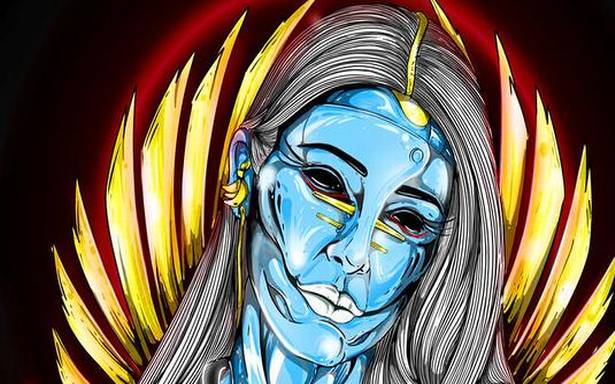 In Santanu Hazarika’s portrait of close friend, actor Shruti Haasan, she is half-human, half-robot, and wears a demure gaze, strokes of a yellow sun rising like wings from her back. A haloed Mother Mary — if she were a cyborg. Cool blue metallic portraits might be the Guwahati-native artist’s latest obsession, but the core idea still reflects his trademark affinity towards creating comic book characters out of people.Winner of the world’s first Red Bull World Doodle Art Champion in 2014, Santanu has been steadily building a name for himself in the world of visual art. His art finds a place in the albums of musicians such as Raftaar, Ritviz and Divine; on sneakers by Adidas and Reebok; as graffiti on walls; and most recently, on a Rajasthan Royals tour bus, for this year’s IPL season.

Over the phone from Mumbai, where he is based out of now, Santanu explains how his fascination with comic books drew him to the world of art. “I designed the artwork for Major Lazer and Nucleya’s mix, ‘Jadi Buti’, in which these two characters: Bass Raja [drawn like an Indian king, an Amar Chitra Katha man with more defined abs] and DJ Lazer [a Jamaican hero shooting out lasers] are on a comic book cover,” he says. “These are two wildly different characters from different universes, in a crossover scene.”

Without any formal training in the subject, comics — from Spiderman and X-Men to Spawn and Dragon Ball Z, were his first inspiration.Headbanging to art “Back in school, I would draw sketches of these characters for friends, to earn canteen money,” recalls Santanu. A quid pro quo, he would continue well into engineering college (this time, for pints of beer). “It was a bad phase for me. I really wanted to drop out, and take up graphic designing or animation, but I couldn’t. I had to undergo therapy for my depression. I would sit in class and just sketch all the time, even the teachers had given up on me,” he says.However, at the same time, word of his work spread and his musician friends in local bands from Guwahati and Shillong started requesting him to design their album art and equipment.Running parallel to his interest in drawing, was his interest in metal music, and the two fed into each other. “I loved listening to bands such as Iron Maiden, Megadeath, Cannibal Corpse,” he says. But what he loved just as much was looking at their album art. “Most of my artwork even now, is inspired by these old metal bands. They know how to give a face to their music. This idea of musical sounds lending to a visual representation is very interesting to me,” he says.Not surprisingly then, Santanu’s work has found favour in India’s growing indie music market, where musicians and artists alike are trying to carve a space that’s rebelliously un-Bollywood and yet Indian at heart. It shows in his work for Mc Altaf And Ikka of Gully Gang, and Seedhe Maut. Gauhati Art ProjectGrowing up in Guwahati, Assam, Santanu says he had a tough time finding mentors in the art and design world. In 2018, he, along with three other artists and designers from the city, started the Gauhati Art Project as a way to give back to their home State of Assam. “We want to bridge the gap between young designers from the Northeast, and the outside world,” he says.GAP holds talks with artists such as the Aravani Art Project, Sanitary Panels’ Rachita Taneja, Green Humour’s Rohan Chakravarty, and others. To encourage originality, last year, it came up with an interesting theme for Inktober — the prompts were uniquely Assamese, from ‘Lahe Lahe’ (taking things nice and slow) to ‘Dolar Bogori’ (an unreliable person, who switches sides often).“My work is heavily inspired by our mythology, history and philosophy,” he adds. “I am interested in how mythology is a beautiful cryptic way of passing on knowledge, hidden in design. The more myths I read, the more I started incorporating those details and metaphors in my art,” he says.

Despite working on different mediums with a variety of clients, he believes that most of his artwork done commercially is not a representation of his original style, which he calls “much vulgar, highly detailed, disturbing, and a touch macabre” — a probable remnant of his metal roots. “In September this year, I will be doing my first solo exhibition in Bombay. It will have my personal works which I have so far been hiding from the world,” he says.

Pandemic diaries: The view from within
But, who spends $69 million on digital art?
To Top
error: Content is protected !!
Top