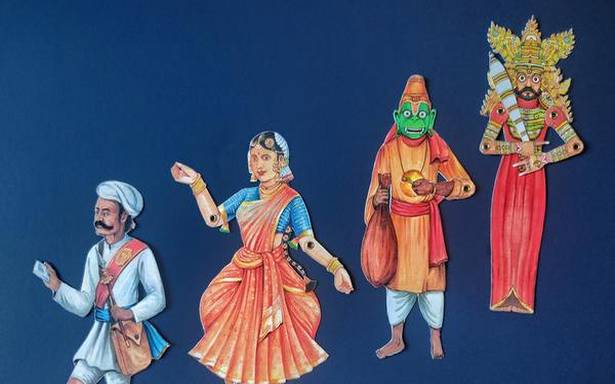 Architect-couple Sharat Sunder Rajeev and Sruthi Satheesan have married craft and art with their interest in Travancore history to come up with a range of collectibles that showcase what is unique to Thiruvananthapuram. Sharat, a conservation architect, and Sruthi, an urban designer, had always nursed a dream to develop their artistic pursuits to make artefacts and art prints. Since November-December 2019, they had been choosing the themes, experimenting and designing. While Sruthi says she is more of a craftsperson, Sharat’s forte is sketching and painting.

Sharat, an author, blogger and history buff who writes on different aspects of life in erstwhile Travancore, decided to concentrate on images connected to Kerala, under the name ‘Soul of Kerala’. They launched it in December 2020 on their Instagram handle @owls.awl. For their first lot of collectibles (in A3 and A4 sizes), they focussed on images from the capital city. So, perhaps for the first time, one can buy souvenirs of the Pandava effigies put up at Sree Padmanabha Swamy temple, Velakali warriors, Anchal Ottakaaran (postal employee who used to deliver mail and missives), Hanuman Pandaram and Bharatanatayam dancers from Thanjavur.

Sruthi does the cutting of the figures and Sharat does the painting with poster colours. Then prints are taken of the original. Sharat and Sruthi call the souvenirs articulated dolls, as the figures can be moved. The Ottakaaran, for instance, has been designed to move his legs while the Pandava prince can move the hand carrying the mace.“Each articulated doll comes with a bookmark, which is an image that is connected to the doll. So the Pandava prince and the Velkali warrior is one set, while the Anchal Ottakaaran and the green post box is another,” says Sruthi.The times that wereEach image has a story behind it. During the 10-day Painguni festival every April, huge, larger-than-life effigies of the five Pandavas are put up at the eastern entrance of the Sree Padmanabha Swamy temple in the city. On the seventh day of the fete, Velakali, a colourful mix of martial moves and dance, representing the battle between the Pandavas and Kauravas, are conducted at the same place. Sharat’s and Sruthi’s paper-cut figures of one of the Pandava princes and bookmarks in the shape of a Velakali warrior bring home the colourful pageantry of the festival.“The Anchal Ottakaaran delivered messages and valuables during the last part of the 19th Century, before the arrival of the green anchal petti (post boxes) in Travancore. However, we were unable to find any pictures of a typical postal employee of those days. That is when I was told that there was a mural in Suchindram temple in Kanyakumari district that had a picture of the Ottakaaran. It was painted by Vaikkathu Paachu Moothathu, royal physician, during the reign of Ayilyam Thirunal (1832–1880),” says Sharat.He travelled to Suchindram, once a part of the erstwhile Travancore kingdom, and made sketches of the Ottakaaran’s attire. “He is depicted as wearing a cap and a white garment with a red sash, and carrying a spear with bells and a bag. The spear was to defend himself against miscreants while the bell announced that the royal messenger was on the move,” explains Sharat.

The ‘Hanuman pandaram’, once a quaint feature of daily life in the city, has also been brought alive by Sharat and Sruthi. “Many old-timers in the city talk of the Hanuman Pandaram. He used to frequent houses to collect alms. Apparently, he used to wear a green-coloured mask that resembled the picture of Hanuman’s visage and carry a sack. Elders used to scare children by saying that he would spirit away disobedient children,” laughs Sharat.The last Hanuman Pandaram was seen in the city during the early 1970s. Sharat depended on a photograph clicked by his uncle to make the image of the Hanuman Pandaram. “I have been told different stories about the Pandaram. Some say that he had a metal plate that hung around on his chest and he used to beat it with a stick to announce his arrival. Some elders recall that his mask’s lower part could be moved…,” says Sharat. The dancer became part of the collection as classical dancers had been invited from Thanjavur to Swathi’s court, and the story goes that he eventually married one of them.More to offerSharat has also added art prints in black and white, sketches that portray life in Travancore in the last century, and a reproduction of a Ravi Varma painting. The art prints come in A3 and A4 sizes. Sruthi plans to add handmade journals (made with handmade paper and bound with vegan leather) to their range.“In fact, that is how the idea of such a collection took shape. I had picked up book binding from my father. He used to make miniature books for me. After my marriage, I saw Sharat’s leather-bound journals, embellished with sketches and his articles. I decided to make those kind of journals with vegan leather sourced from a producer in Kerala,” says Sruthi. During the lockdown, it became difficult to get the right kind of paper and vegan leather, so they had put it on the backburner. Sharat says that eventually, they plan to enhance their range with collectibles relevant to places all around Kerala. The prices range from ₹250 to ₹750. Contact the duo on Instagram handle @owls.awl for more details.