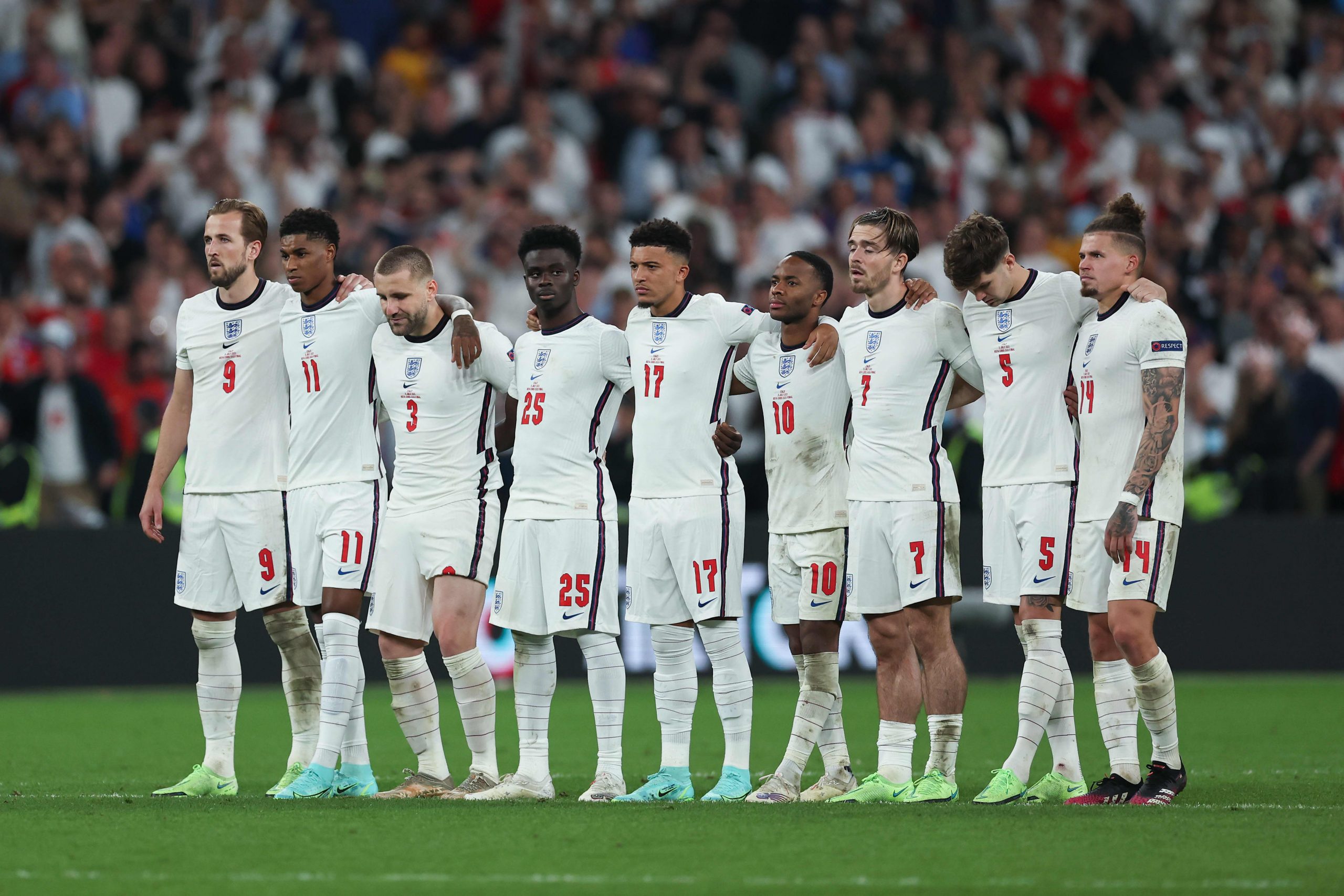 England players look on from the half way line during a penalty shoot at the UEFA Euro 2020 Championship Final between Italy and England.Eddie Keogh – The FA | The FA Collection via Getty ImagesLONDON — Soccer stars of past and present believe social media companies need to up their game when it comes to tackling racist abuse on their platforms.Black England soccer players Marcus Rashford, Jadon Sancho and Bukayo Saka were the target of a torrent of racist abuse on Facebook, Instagram and Twitter following England’s loss to Italy in the Euro 2020 final on Sunday.Shaka Hislop, a former West Ham United and Newcastle United goalkeeper, who is a founding member of campaign group Show Racism the Red Card, told CNBC’s “Squawk Box Europe” on Friday that social media companies need to do more, and accused them of “hiding in a self-serving manner.”The ex-footballer said social media companies base their value on the number of users, regardless of whether the user accounts are real or not, because it boosts their bottom line or their stock prices.”That to me is not a good enough excuse to continue to allow racism on their platforms in the manner that they have,” he said.”Their responsibility to the wider community goes far further than their valuations or what their shareholders may get from their companies,” Hislop said. “They play a role in our culture, they play a role in our communities, and they have to recognize that.”Saka, a 19-year-old Arsenal midfielder, said in a statement Thursday that he doesn’t want any child or adult to receive the “hateful and hurtful messages” that he, Rashford and Sancho got this week after they missed penalties for England.”I knew instantly the kind of hate that I was about to receive and that is a sad reality that your powerful platforms are not doing enough to stop these messages,” he said.”There is no place for racism or hate of any kind in football or in any area of society and to the majority of people coming together to call out these messages, by taking action and reporting these comments to the police and by driving out the hate by being kind to one another, we will win,” said Saka.Sancho wrote on his Instagram profile on Wednesday that he saw the racist abuse after the game and that “it’s nothing new.” Meanwhile, Rashford said he won’t apologize for who he is.A Facebook spokesperson told CNBC on Monday the company moved quickly to take down racial abuse aimed at England players on Instagram, which it owns.”No one should have to experience racist abuse anywhere, and we don’t want it on Instagram,” the spokesperson said. “We quickly removed comments and accounts directing abuse at England’s footballers last night and we’ll continue to take action against those that break our rules.”However, Instagram boss Adam Mosseri admitted Thursday that its algorithms permitted some racist comments and emojis to remain on the platform.”We have technology to try and prioritize reports, and we were mistakenly marking some of these as benign comments, which they are absolutely not,” said Mosseri on Twitter in response to a BBC journalist.”The issue has since been addressed, and the publication has all of this context.”A Twitter spokesperson said racist abuse has no place on its platform, adding that it had used software and human reviewers to remove more than 1,000 tweets and permanently suspend a number of accounts.  The British government is aiming to crack down on large tech companies over the proliferation of harmful content. Proposed legislation known as the Online Safety Bill would give media watchdog Ofcom the power to fine companies up to £18 million ($24.9 million) or 10% of their annual global revenues, whichever is higher, for breaches.U.K. Prime Minister Boris Johnson vowed on Wednesday to ban anyone who posts racist abuse online from soccer matches but he failed to give a time frame.Hislop said the law will need to be enforced after it is implemented.”I think the enforcement of laws and other legislation guides public behavior,” he said. “Public behavior dictates shifts in culture, and that’s what we need here.”— Additional reporting by CNBC’s Ryan Browne.