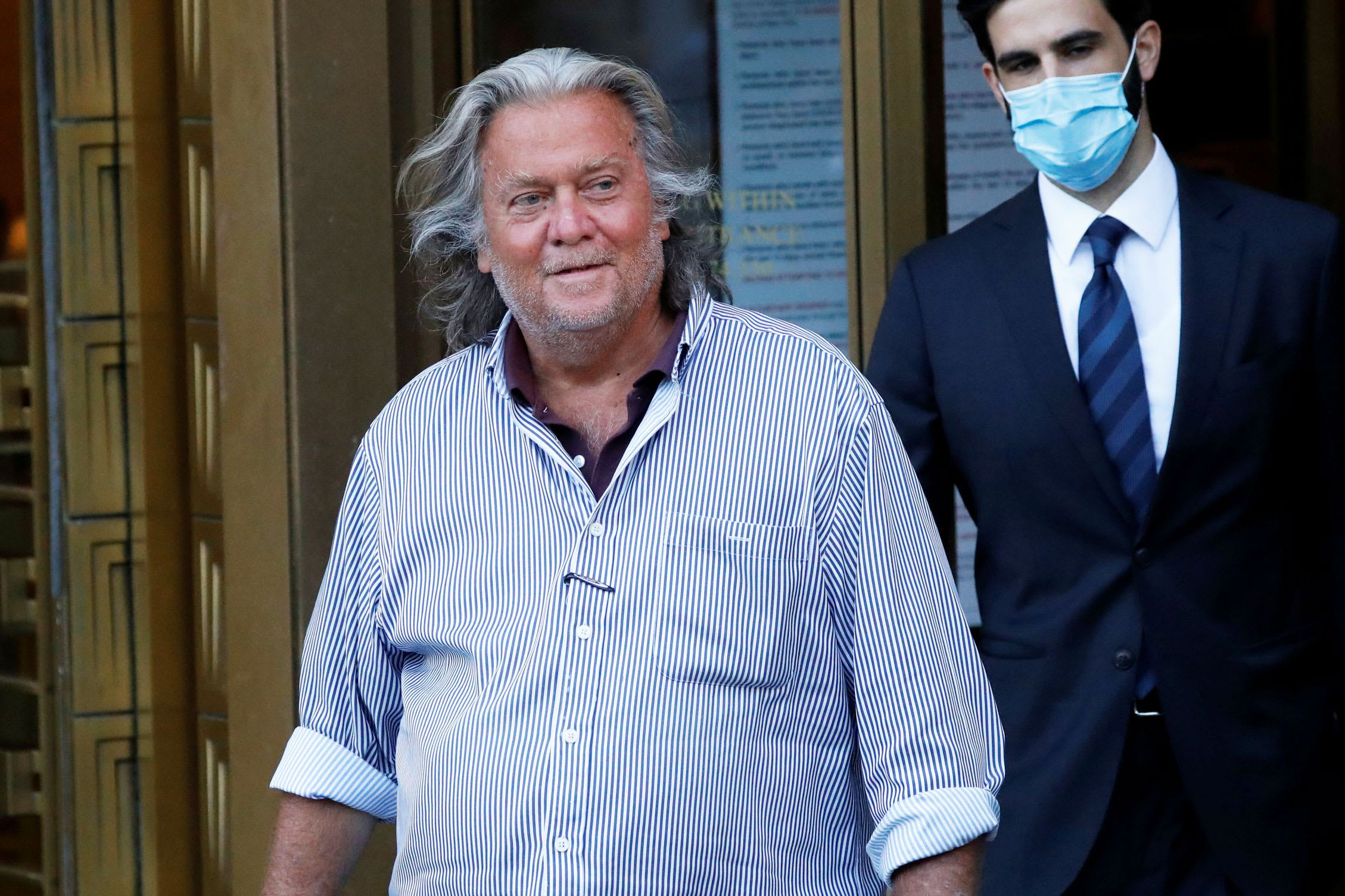 Former top Trump aide Steve Bannon’s podcast was permanently suspended by Twitter and had an episode yanked from YouTube after he implied that FBI Director Christopher Wray and leading government infectious-diseases expert Dr. Anthony Fauci should be beheaded and have their heads put on pikes outside the White House.Those comments by Bannon on Thursday came while he is free on a $5 million release bond in a federal criminal case in which he is accused of defrauding donors to a nonprofit group purportedly dedicated to building a wall on the southern border of the United States.A spokeswoman for Bannon said that he was not suggesting that Fauci and Wray actually be beheaded, but was speaking metaphorically by referencing the bloody politics of Tudor-era England. She also said he has “never called for violence of any kind.”A spokesman for prosecutors in the Southern District of New York declined to comment Thursday night when asked whether they will ask a Manhattan federal court judge to either revoke Bannon’s bond, or to issue a gag order on him.Bannon made the remarks about Wray and Fauci on his “War Room: Pandemic” podcast, when he was discussing a hypothetical second term for President Donald Trump.Bannon ran Trump’s 2016 campaign and served as a senior White House advisor until Trump fired him in August 2017.Bannon during the podcast said, “Second term kicks off with firing Wray, firing Fauci.””Now I actually want to go a step farther, but I realize the president is a kind-hearted man and a good man,” Bannon continued.”I’d actually like to go back to the old times of Tudor England, I’d put the heads on pikes, right, I’d put them at the two corners of the White House as a warning to federal bureaucrats. You either get with the program or you’re gone – time to stop playing games.””Blow it all up, put Ric Grenell today as the interim head of the FBI, that’ll light them up, right,” Bannon said.Grenell is a hard-core Trump loyalist who served as former acting director of national intelligence and ambassador to Germany.Bannon’s co-host Jack Maxey then said, “You know what, Steve, just yesterday there was the anniversary of the hanging of two Tories in Philadelphia, these were Quaker businessmen who had cohabitated, if you will, with the British while they were occupying Philadelphia.””These people were hung. This is what we used to do to traitors,” Maxey said.Bannon replied, “That’s how you won the revolution. No one wants to talk about it.””The [American] revolution wasn’t some sort of garden party, right?” Bannon said. “It was a civil war. It was a civil war.”Twitter said it suspended Bannon’s account because of the remarks on “War Room.”A Twitter spokeperson in a statement said, “The @WarRoomPandemic account has been permanently suspended for violating the Twitter Rules, specifically our policy on the glorification of violence.”YouTube removed the episode, but other War Room episodes remain available.Alex Joseph, a spokesperson for YouTube, which is owned by Google, said, “We’ve removed this video for violating our policy against inciting violence. We will continue to be vigilant as we enforce our policies in the post-election period.”YouTube has a three-strikes policy before an account is terminated. While the Bannon show’s channel is still available, the strike from this incident temporarily disables uploading for at least a week, according to YouTube.Bannon’s spokeswoman, in an emailed statement, said, “Mr Bannon did not, would not and has never called for violence of any kind.” “Mr. Bannon’s commentary was clearly meant metaphorically. He previously played a clip of St. Thomas More’s trial and was making an allusion to this historical event in Tudor England for rhetorical purposes,” the spokeswoman said.”Mr. Bannon has been openly critical of FBI Director Chris Wray for weeks and has called for his firing for his failure to investigate and address Hunter Biden’s hard drive, and that has been in Director Wray’s possession since in Dec 2019,” she said.”In addition, Mr. Bannon has supported comments from the White House calling for the immediate firing of Dr. Fauci.”In a 2016 interview with The Hollywood Reporter, Bannon compared himself to the famous chief minister to England’s King Henry VIII, who had him beheaded.”I am Thomas Cromwell in the court of the Tudors,” Bannon said in that interview.Bannon was arrested Aug. 20 off the coast of Connecticut aboard a 150-yacht owned by Chinese billionaireBannon and three associates, Timothy Shea, Brian Kolfage and Andrew Badolato, are accused of defrauding donors as they raised more than $25 million to build a wall along the southern border for the We Build the Wall nonprofit group.Bannon has pleaded not guilty in the case.He is free on a $5 million bond secured by $1.75 million in cash or property while awaiting his trial, scheduled for next May.Acting U.S. Attorney Audrey Strauss, after the men were charged, said in a statement, “The defendants defrauded hundreds of thousands of donors, capitalizing on their interest in funding a border wall to raise millions of dollars, under the false pretense that all of that money would be spent on construction.””While repeatedly assuring donors that Brian Kolfage, the founder and public face of We Build the Wall, would not be paid a cent, the defendants secretly schemed to pass hundreds of thousands of dollars to Kolfage, which he used to fund his lavish lifestyle.”Prosecutors say Bannon received $1 million in funds from We Build the Wall, and that to divert that money used a separate nonprofit he had already created, whose ostensible purpose was “promoting economic nationalism and American sovereignty.”

TikTok is on a hiring spree in Ireland and expects to have over 1,100 staff there by January
Wren Attleroy: therapist – a solution for strong personalities
To Top
error: Content is protected !!
Top