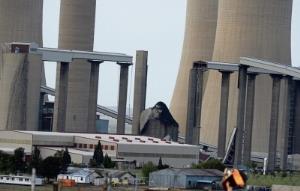 Eskom is in a race against time to finish constructing a multi-billion rand railway line to the Majuba power station in Mpumalanga. Failure to do so by March 2020 will see Eskom having to renegotiate the terms of billions of dollars in World Bank loans, which could have a knock-on effect on its other World Bank funded projects, such as the Medupi power station.

Eskom is battling to service about R500bn’s worth of debt as it is, and cannot afford to irritate its funders, which include the World Bank. If President Cyril Ramaphosa’s third State of the Nation Address (Sona) on Thursday night is anything to go by, Eskom’s financial problems are going nowhere.

As Fin24 previously reported, President Cyril Ramaphosa disappointed many experts when he did not expand on plans to unbundle Eskom or announce the appointment of a chief restructuring officer to guide that process.

But he announced plans to expedite a R230 billion bailout facility to Eskom.

Eskom CEO Phakamani Hadebe resigned suddenly at the end of May, citing the impact of “unimaginable demands” on his health.

The 68 kilometre-long Majuba rail line is 90% complete, according to the World Bank, but Eskom said its completion is dependent on plant generation capacity, and on a coal tippler outage planned for 40 days in September.

Eskom’s June 2018 financials state that breakdowns in signaling and coal tippler equipment have been a big problem for the rail line. Eskom told News24 that “generation plant availability” and low coal stock levels at Majuba are behind the delays.

Eskom told News24 that the project is due for completion in early December 2019, and should be operational by the end of the year.

But, “this is, however, subject to a 40 day coal tippler outage scheduled to commence on September 2, 2019, as well as generation plant availability,” Eskom said.

The tippler offloads coal from the trains.

“If the project is not completed by March 2020, Eskom will have to engage the World Bank on the new terms and conditions (of its loan),” Eskom said via email.

The railway line is at least three years overdue, although it was first announced in 2007.

Majuba power station is just outside Volksrust in Mpumalanga, near Ermelo. It is Eskom’s second biggest coal–fired power station with an installed capacity of 4110 MW.

Without a dedicated coal mine, and being located near a coal bed which is not easily mine-able, Majuba has always faced challenges with coal supply. But the impact of state capture on coal supply to Majuba has also added to the problem.

The project has also been held back by technical problems – specifically, faulty signaling equipment.

The railway should have been completed by the end of December 2017, after Eskom revised its completion date from 2016. Work began in 2013, but the project was supposed to have kicked off in 2010.

The loan from the World Bank to Eskom for the rail line and related carbon energy efficiency projects amounts to about R6 billion. The package includes obligations on Eskom to commission studies about power plant efficiency improvements, implementing energy storage capacity, and saving coal transport costs.

The Majuba rail project is one of several projects partly funded by the World Bank. The first is the Medupi power plant.

The other projects are aimed at reducing Eskom’s environmental impact, and are an effort to offset the effects of funding another enormous coal powered station.

This includes the construction of the Sere Wind Farm and Eskom’s battery storage development program.

The latest World Bank update on these projects from April 2019 says that loans for these projects were effected in 2010, and many of the projects should have been finished at the end of October 2015. The revised completion date is now December 31 for all the projects except for two: Eskom was supposed to have reduced its coal transportation costs significantly by the end of last year but it did not meet its targets.

Not completing the line in time will have other repercussions besides adding to Eskom’s debt problems. The most significant from Eskom’s point of view will surely be costs. Cutting the cost of moving coal to the Majuba station was behind the reason for building the rail line in the first place, Eskom said when it announced the project in 2007.

The second headache for Eskom is the deterioration of the roads in Mpumalanga that the high number of trucks causes, and the resultant road safety issues. Hundreds of trucks deliver coal to Majuba daily.

The third biggest reason for building the railway line is the need for Eskom to reduce its carbon footprint.

Despite this, between 2015 and 2018, the amount of coal transported by rail dropped, Eskom’s annual report shows.

The Hendrina and Komati stations were also affected.

But all is not lost. The World Bank, in its April report, notes that while Eskom’s operational performance deteriorated, there has been “reasonable progress” in implementing some of its projects, including in the renewable energy space.