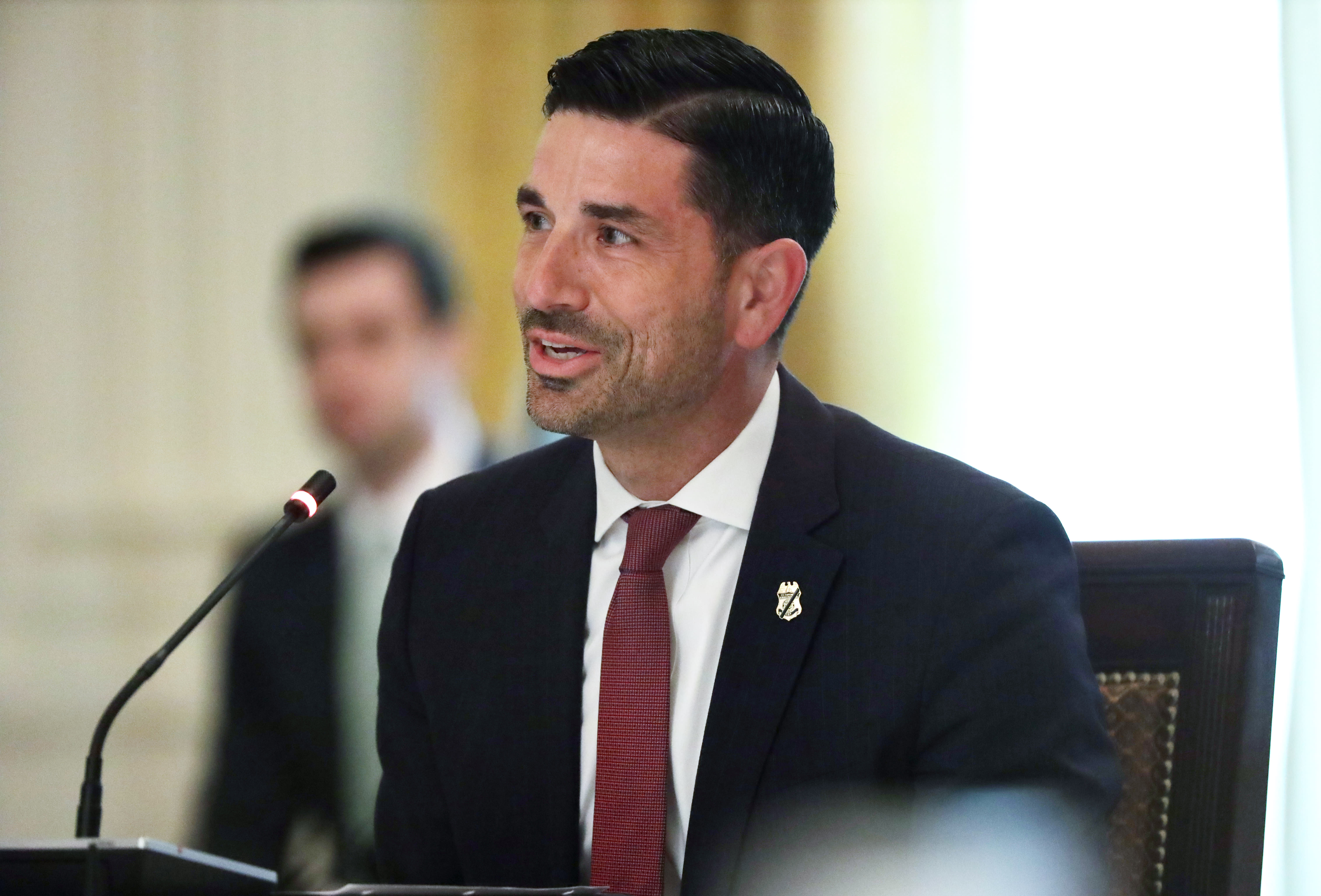 Acting U.S. Secretary of Homeland Security Chad Wolf speaks during a cabinet meeting in the East Room of the White House on May 19, 2020 in Washington, DC.Alex Wong | Getty ImagesThe Department of Homeland Security is calling on tech companies to take “appropriate action” on posts that encourage others to break mandated curfews, loot stores or coordinate violence amid nationwide protests demanding police reform and racial justice.In a letter to top executives of Facebook, Twitter, Snap, Google parent Alphabet and Apple, DHS Acting Secretary Chad Wolf wrote: “In light of the violence, looting, and vandalism that marred many of the protests throughout the country, and in light of the role social media may have played in organizing this unlawful conduct, I am asking you to help keep Americans safe by taking appropriate action, consistent with your terms of service, against content that promotes, incites, or assists the commission of imminent illegal activities and violence. This includes calls to break city curfews, information about which stores or neighborhoods to target for looting or destruction, and coordination of attacks against particular people or groups of people.”CNBC obtained a copy of the letter, which was first reported by The Washington Post.The request comes as Democrats have criticized the Trump administration’s response to the protests, which included clearing a group of peaceful demonstrators with tear gas before the president made his way to a nearby church for a photo-op. Though several instances of looting and other acts were reported, particularly in the early days of the protests, most have remained largely peaceful. The Trump administration and conservative allies in Congress have focused heavily on the role of tech companies in moderating content and have sought to strip them of a key liability shield for their users’ posts. Trump and other conservatives have repeatedly accused the social media giants of displaying bias in their procedures and algorithms that disadvantage conservative voices. The companies deny this.Now, Trump and conservative lawmakers in Congress are attempting to dismantle key protections provided by Section 230 of the Communications Decency Act. Trump signed an executive order in late May seeking to place additional conditions on the liability shield, which industry advocates argue protects platforms from a landslide of frivolous lawsuits and allows them to operate the internet as we know it.Soon after, Attorney General William Barr introduced a legislative proposal to amend the law, as did conservative lawmakers including frequent tech critic Sen. Josh Hawley, R-Mo.As companies across the country are pressured by consumers to take a stand against racial injustice, social media companies have found themselves in a difficult spot considering Trump’s allegations of bias.Twitter, however, has continued to moderate Trump’s posts, including obscuring a message he sent on the platform for violating Twitter’s rules about “glorifying violence.” In the tweet, Trump said he’d told Minnesota Gov. Tim Walz that the military would support him if he needed backup as protests erupted in Minneapolis over the police killing of George Floyd. In the tweet, Trump wrote, in part, “when the looting starts, the shooting starts.”Though Twitter has become more aggressive in taking action on Trump’s tweets, Facebook has taken a more hands-off approach. It did not take action on Trump’s “looting” tweet, prompting some employees to speak out and for major advertisers including Unilever and Verizon to join in a boycott of the platform organized by racial justice groups.On Friday, CEO Mark Zuckerberg said the company would begin banning ads that claim people from a specific race, ethnicity, nationality, caste, gender, sexual orientation or immigration origin are a threat to the physical safety or health of anyone else. He did not mention the boycott, however.A Twitter spokesperson confirmed the company received the letter and plans to respond. A Snap spokesperson also confirmed receipt. Representatives from the other companies did not immediately respond to requests for comment.— CNBC’s Ylan Mui contributed to this report.Subscribe to CNBC on YouTube.WATCH: How the internet is regulated

Democrats plan super PAC that will use Trump’s own tweets against him
The Facebook ad boycotts have entered the big leagues. Now what?
To Top
error: Content is protected !!
Top