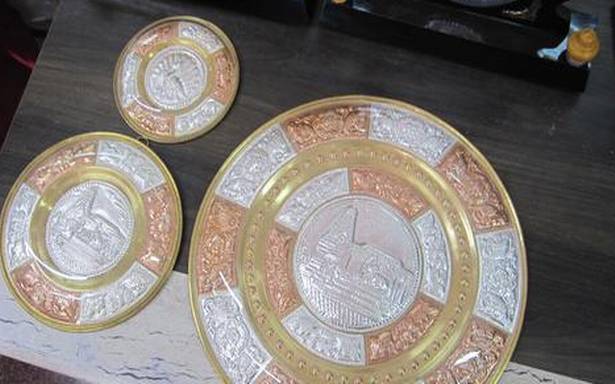 The makers of the Thanjavur Art Plate, with its roots in a craft that dates back to the Marathas of the 1800s, are banding together for its cultural and commercial rejuvenation

At his home in Nanayakarar Chetty Street, Thanjavur, which doubles up as his workshop, M Paramasivam, 72, covers a brass kodam (water pot) with ornate etchings of floral motifs, using a tiny chisel.Paramasivam, who started working at the age of 16, is one of a dwindling number of old-school artisans who specialise in what used to be known as ‘Thanjavur kalai’ (an umbrella term for an art that incorporates embossing, etching, engraving and filigree on metallic surfaces).Thanjavur kalai requires the skills of a metalworker, jeweller and a designer of not just patterns, but also tools. That is why it is quite common to see four or more people work on each step of an artefact.“I am the last in five generations of my family in Thanjavur kalai; I hope the glory days of our craft will come back in my lifetime,” says Paramasivam.Vintage craftPatronised by Maratha ruler Serfoji II (1777-1832),Thanjavur kalai craftsmen were kept busy with orders for royal gifts, mostly decorative salvers, jewel boxes and vessels like water pots and ewers. In its contemporary version, the craft has been commercially reinterpreted as ‘Thanjavur kalai thattu’ or Thanjavur Art Plate, a ceremonial platter made with silver, copper and brass layers in three stages: the base plate with alternate copper and silver panels, a bigger embossed silver motif on the central section, and the setting of globular jigna or sequins in the secondary relief.
Thanjavur Art Plate was given a Geographical Indications (GI) tag in 2007, as a proof of its long heritage.Once prized as the pinnacle of artistry in Tamil Nadu, it was often presented to visiting dignitaries by the State Government. In 1980, for instance, an elaborately embellished Thanjavur Art Plate was gifted by the then-Governor Sadiq Ali to Britain’s Prince Charles during his visit to India.With prices fixed according to size, Thanjavur Art Plates can fetch anywhere upwards of ₹4,000.

Artisan M. Paramasivam has been working on Thanjavur Art vessels since the age of 16. Photo: Special Arrangement/THE HINDU

“Every Thanjavur kalai piece is unique, because the artisan will customise the design to suit the surface. It is a pity that it has become confined to a single product,” says N Paramasivam, president of the district-level Thanjavur Art Plate Artisans’ Welfare Association.The recently-formed industry body has 200 members.“We formed the welfare association mainly to protect the authenticity of our products,” says PGA Babu, the secretary. “While a genuine 10-inch Thanjavur Art Plate in the Government-run Poompuhar showroom costs ₹4,500, you can find something similar with fake metal adhesive strips for as less as ₹700 just a few shops down the road. Customers should respect the workmanship, and patronise only genuine outlets for buying our plates,” he says.Designer wareWatching the artisans work requires several trips to the home-based pattrais (workshops) in the Therku Veedhi area in Thanjavur, where plates travel from hand to hand in different stages of completion.Traditional artisans tend to buy old brassware from shops because their thicker gauge allows them to work on intricate designs from scratch.A hot paste of pungaliya tree resin and brick powder or red sand is poured into orifices of vessels which solidifies as it cools, allowing the artisan to work on the outer surface without denting the base. Once the design is finished, the solid paste is carefully removed from the interiors.A similar waxy background fixes plates firmly to the work surface until the embellishment is over.

An artisan working on the central image of a Thanjavur Art Plate. Photo: Special Arrangement/THE HINDU

While religious motifs such as Ashtalakshmi (eight avatars of Goddess Lakshmi) and Dasavatharam (10 incarnations of Lord Vishnu), are commonly used on Thanjavur Art Plates, designs can be varied to include corporate logos and Nature themes.Aided by lathes, iron tools and ground-level forges, the artisans also create lead dies for the motifs from scratch, transferring paper patterns to copper and silver foil by punching tiny dots through the diagram.“Artisans of my father’s generation worked long hours to keep up with orders. There was a healthy competition among peers to see who would come up with the prettiest product,” says Babu.Changing timesThe cottage industry has been witnessing a slow decline despite its protected status. Once employing over 200 artisans and their families in Thanjavur, today there are only around 60 people still active in this art form.Primed for the marketThe din of ringing metal announces the presence of the temporary workshop in the basement of the Poompuhar showroom on Gandhiji Road in Thanjavur. Ten Thanjavur kalai craftsmen are hard at work here on different stages of platters for a corporate function.“The silver that we use in these plates is 99.9% pure, because foil work cannot be done alloyed metal,” says workshop supervisor S Palanivel. “We make plates from five inches to 24 inches in size here. Plates up to 16 inches sell well; bigger sizes are available on order. Every step is equally complicated. For example, a less experienced person can damage the foil work or the copper embossing if they don’t know how to fill it with hot wax,” says Palanivel as he shows us around the tiny workspace.As the last step, acrylic domes are affixed on the plates to prevent the metals from getting tarnished.Many artisans feel that the concentration on plates has left little scope for them to work on other items like vessels and devotional images that used to be valued both as artefacts and for religious worship.“I used to participate in workshops held by handicraft emporia across India, and also send products to the bigger cities. But for the past 15 years, the market for other items bearing Thanjavur kalai embellishments has died out,” says artisan Paramasivam. “If art lovers and artisans both return to the heritage roots of the craft, it will definitely flourish again.”Poompuhar, the State Government-run handicraft emporium, is the sole authorised source for genuine Thanjavur Art Plates, and so, saw a steady demand that kept sales as high as ₹6-10 lakh per month. The recent lockdown changed that.“The orders have stopped because of the restrictions on public meetings, especially Government functions where our plates are usually given away as mementoes,” says K Arun, the showroom manager.To encourage revival, the authorities are planning to open a dedicated unit to produce Thanjavur Art Plates. “The machines will be available in our common workshop, which can be used by artisans for a nominal charge,” says Arun. “We may be able to draw a younger crop of artisans to this craft if we use technology to ease some of the hard physical labour involved in plate production.”To create a genuine Thanjavur Art Plate, artisans need to develop a high level of artistic skill that requires knowledge of mathematics, geometry and metallurgy, besides drawing.Many of the older artisans achieved this despite never having attended school. “The young people in our community are getting educated these days, to find better-paying jobs. I hope education will inspire them to reinvigorate our profession,” says Babu.