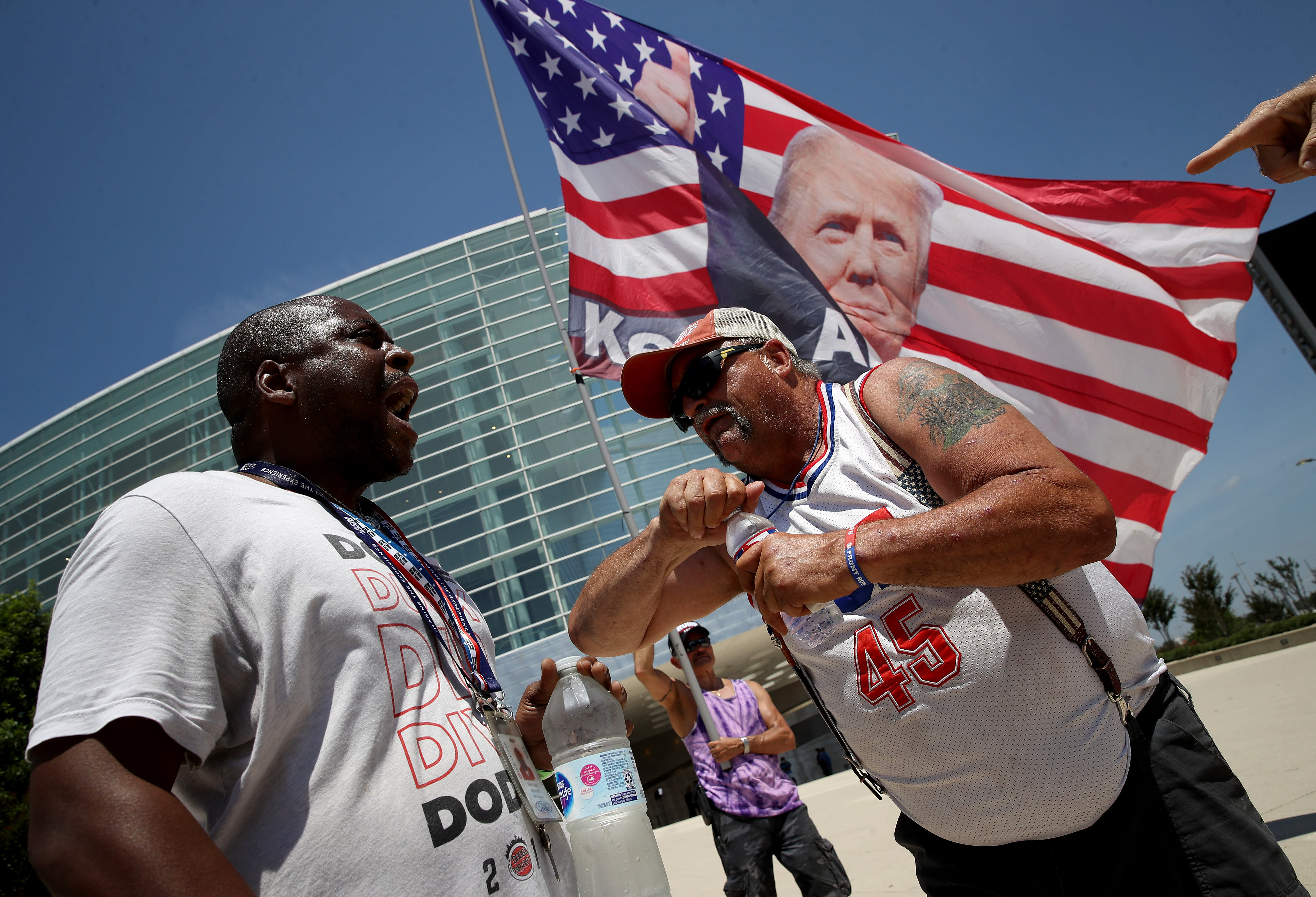 Nicholas Winford (L) debates Trump supporter Randall Thom (R), on the racial policies of U.S. President Donald Trump outside the BOK Center June 18, 2020 in Tulsa, Oklahoma.Win McNamee | Getty ImagesPresident Donald Trump warned Friday that anyone coming to Oklahoma to protest against his campaign rally in Tulsa “will not be treated” like they have been in other areas of the country.”It will be a much different scene!” Trump said in a tweet.The president’s threat, which lumped protesters in with “anarchists, agitators, looters or lowlifes,” came a day before he plans to return to the campaign trail with a massive in-person rally. The gatherings, once a hallmark of Trump’s campaign style, have not been held for months out of concerns about spreading the coronavirus.The kickoff event to reboot Trump’s reelection campaign has been hugely controversial. Public health experts — even some within the Trump administration, such as Dr. Anthony Fauci — have warned that the event could spread the deadly disease. The White House declined to comment on Trump’s tweet.The rally, which comes amid a nationwide protest movement against police brutality in the wake of George Floyd’s death, is also expected to draw virtual and in-person opposition from activists and demonstrators.Trump has criticized leaders in New York, Minneapolis and Seattle for their handling of the protests. The president has taken an aggressive “law and order” stance against the demonstrations, at times blurring the distinction between the thousands of peaceful participants and those who have committed acts of violence or theft during the events.The city of Tulsa on Thursday had initially announced a last-minute 10 p.m. curfew that would take effect Friday and Saturday, explaining that local law enforcement informed had warned that people from violence-causing groups were traveling to Tulsa to foment unrest around Trump’s rally, multiple outlets reported.But in a statement Friday afternoon, Tulsa Mayor G.T. Bynum said the U.S. Secret Service asked him to lift the curfew order, and he complied.”Last night, I enacted a curfew at the request of Tulsa Police Chief Wendell Franklin, following consultation with the United States Secret Service based on intelligence they had received,” Bynum said in the statement, NBC News reported.”Today, we were told the curfew is no longer necessary so I am rescinding it,” Bynum said.Before that statement was released, Trump tweeted that he had just spoken by phone with Bynum, who “informed me there will be no curfew tonight or tomorrow for our many supporters attending the #MAGA Rally.””Enjoy yourselves – thank you to Mayor Bynum!” Trump said in the tweet.Meanwhile, the Oklahoma Supreme Court on Friday denied a request to order the arena where the rally is being held to enforce social distancing precautions, NBC reported. The court said in a unanimous decision denying the request that the groups involved could not establish that the BOK Center in Tulsa is compelled to enforce social distancing rules, according to NBC.The rally was originally scheduled for Friday. But Trump changed the date after facing criticism for planning a rally on Juneteenth — a day commemorating the end of slavery in the U.S. — and hosting it in a city that saw a historic and deadly race riot. The president has been eager to get out of the White House, where he has spent most of the last three months as the government worked to combat the pandemic. Trump tweeted later Friday morning that “big crowds and lines already forming in Tulsa,” adding that his campaign “starts on Saturday night in Oklahoma!”The Trump campaign said attendees will receive temperature checks, masks and hand sanitizer before entering the BOK Center, which holds more than 19,000 people. Rallygoers will not be required to wear the masks, a campaign spokesman told CNBC.

People asking friends to take Covid-19 tests before hanging out
Facebook buys start-up in latest push to take on Apple and Google
To Top
error: Content is protected !!
Top