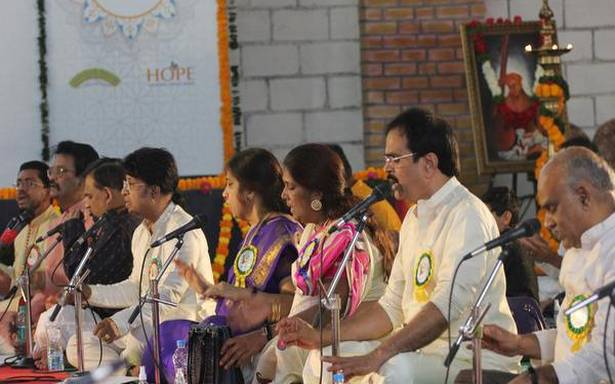 The Pancharatna kritis reverberate, warming up the last of the winter chill. Post-pandemic, most cultural organisations in Hyderabad had planned to scale down their Tyagaraja aradhana celebrations . A select few have been allowed to gather at the venue, and the rest are online.The sixth annual Hyderabad Tyagaraja Aradhana Music Festival (HTAMF) by Sanskriti Foundation was held at Ethnic Hall, Shilparamam on February 7. The Pancharatna Seva was attended by about 100 artistes with more than 200 attending the digital event. The air was filled with fervour as the singers broke into ‘Endaro Mahanubhavulu.’ Veteran mridangam artiste Yella Venkateswara Rao led the instrumentalists with his masterly mridangam. Well-known vocalists Mohan Krishna, Popuri Gowrinath, flautist Manda Anantha Krishna, mridangam artiste Peravali Jayabhaskar and other prominent artistes were part of the aradhana. As part of its annual tradition, Sanskriti Foundation felicitated veena vidwan Ayyagari Syamasundaram for his contributions to the field of music, and released a new digital quarterly magazine called Tarang. The link to the second edition: https://issuu.com/tarangmagazine/docs/edition_2-67