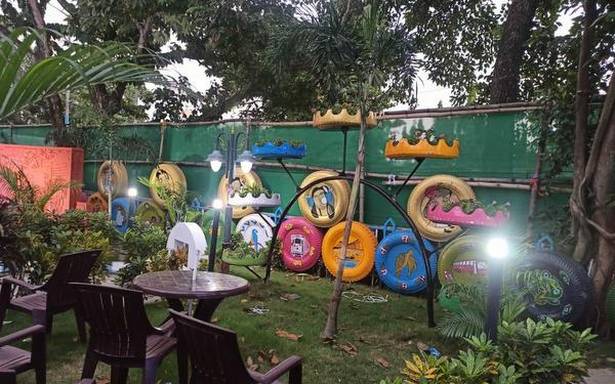 The Esplanade Bus Depot in the heart of the city usually buzzing with the noise of buses and chugging of trams is all set to have a unique art installation made of used old tyres. The West Bengal Transport Department is giving final touches to what it calls “the country’s first tyre park”.“The idea behind the park is that waste can be converted into art. Nothing is waste and can be art, and that is the message of the tyre park coming up in Kolkata,” an official of the West Bengal Transport Department said. Disposal of used and waste tyres is not only a challenge for authorities but also takes a lot of time. Usually, such tyres remain piled up at the bus depots, making them an eyesore. The employees of West Bengal Transport Corporation (WBTC) started working on such tyres and other scrap material for weeks and have been able to convert them into an eye-pleasing and colourful amalgamation.

An art installation at the Tyre Park in Esplanade Bus Depot, Kolkata

Once completed, the park will have a small café, music and offer space for people to sit and relax in one of the busiest areas of the city. “It will be an island of peace in an otherwise very crowded area,” said Rajanvir Kapur, managing director of West Bengal Transport Department.While Kolkata is known for awe-inspiring art installations during the Durga Puja festival, they can be enjoyed only a couple of weeks. The tyre park will add to the list of permanent art installations in the city. Officials said that the location of the tyre park at Esplanade is just opposite the WBTC’s tram control room. The location has been carefully chosen keeping in mind other interesting attractions like Smarnika, a museum housed in a tramcar, which takes people down memory lane on the evolution of trams.

The Tyre Park in Esplanade Bus Depot will add to list of permanent art installation in Kolkata.

Esplanade serves as an important junction from where people take trams and buses. The recently launched tram library that runs on the Esplanade Shyambazar route also makes a few stops daily at Esplanade.

Monuments and music
An abode of compassion
To Top
error: Content is protected !!
Top