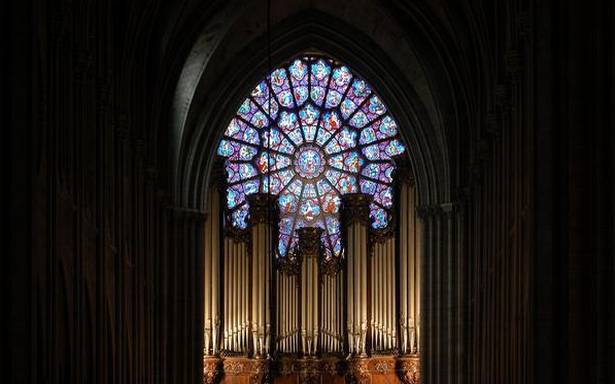 Architecture and music have long shared a close romance. A look at the relationship between these two art forms down the ages

Emperor Ashoka’s rock edicts are the inspiration for T.M. Krishna’s latest work. Though the inspiration is epigraphical and not architectural, ‘The Edict Project’ obliquely recalled for me the long and intertwined history of music and architecture.While the musicality of Krishna’s project seems forced, architecture and music have long inspired and informed one another in myriad ways, linked as they are by rhythm, proportion, harmony, and the emotional effects they have on their audience. Indeed, terms and disciplines like ‘sound architecture’ and ‘music archaeology’ are ample proof of their overlap and mutuality. Their correlation is best enshrined in a dictum attributed to Johann Wolfgang von Goethe: ‘Music is liquid architecture; architecture is frozen music’. But the affair goes back way beyond Goethe. In fact, the first interconnections can be traced back to ancient Greece, where Greek temples and coliseums were designed to proportional principles that would not only create supreme architectural beauty but also reveal ‘the music of the heavenly spheres’. Often built around musical performances, these ancient Greek structures were created with the best acoustic environments. Similar traditions followed in grand European cathedrals such as the one at Notre Dame in Paris. The ceremonial architecture was intended to mirror and complement the liturgical activities of the Christian church, and also reflect its power. Medieval Europe was full of instances of what may be called architectural polyphony.

The Colosseum in Rome.

In fact, Greek philosophers were already wondering if the ‘colours’ of music could be quantified. And Isaac Newton suggested that musical notes and the tones of colour might share common frequencies, something Goethe too discussed in his book, Theory of Colours.Closer home, the stone masons and sthapatis of ancient India created some glorious examples of the congruence of the two arts. Many ancient south Indian temples such as the Vijaya Vittala temple in Hampi, Karnataka; Lepakshi temple in Andhra Pradesh; and Nellaiappar temple, Alwarthirunagari temple, and Adi Kumbeswarar temple in Tamil Nadu have extraordinary stone pillars that emit musical notes when struck.

In fact, the Indian sculptural traditions use the cchanda (poetic meter) principle of scaling while many forms of Indian music have the meru (vertical elevation) principle of scaling, showing how these disciplines often mirror each other.Like most histories, those of music and architecture also start against sacred backgrounds. Before the secularisation of music, most of it was created for religious purposes to be performed in religious spaces. However, both arts have long transcended those boundaries and are now found in ordinary and everyday contexts. And when architecture and music are used in tandem, some remarkable works of art are born.

In the picturisation of the song ‘Let it go’ from the animated film Frozen (2013), Elsa builds a magical ice castle to the tune of her song, raising a wall, a column, a spire with every note of her voice.Music and space are intertwined in many such examples from pop music such as ‘Brick by Brick’ by Train (2009), and ‘Palaces’ by Nelly Furtado (2017), to name a couple. Last year, the German indie rock band, LIONLION, released a music video for their song ‘Oceans Rise’, which was inspired by the Bauhaus style of architecture. The reduced, minimalistic design vocabulary of the video reflects the famous German school that celebrated its centenary in 2019.In 1995, Grammy-winning American blues performer Henry Saint Claire Fredericks, whose stage name is Taj Mahal, teamed with Vishwa Mohan Bhatt on the mohan veena and N. Ravikiran on the chitravina to record the album titled ‘Mumtaz Mahal’.For Chicago’s Access Contemporary Music company, architecture-inspired music is serious, regular business. Each year, they commission composers to create works based on the city’s most remarkable spaces such as the Carr Chapel, the Union Station, International Museum of Surgical Science, Sedgwick Studio, and the Elks National Memorial. The commissioned works are collated for a performance during Open House Chicago, an annual weekend where citizens tour those buildings while listening to the music pieces that inspired them.Such collaborations come closest to that perceptual phenomenon called synaesthesia, where one “sees” a note or “hears” a colour. And the rich permutations from such intersections can be endless if we keep our minds open to the possibilities.The author is a culture writer and an Interfaith Studies scholar.

Coimbatore-based artist Simran Wahan has launched a 2021 calendar with her paintings
Upcoming tyre park in Kolkata set to turn waste into art
To Top
error: Content is protected !!
Top