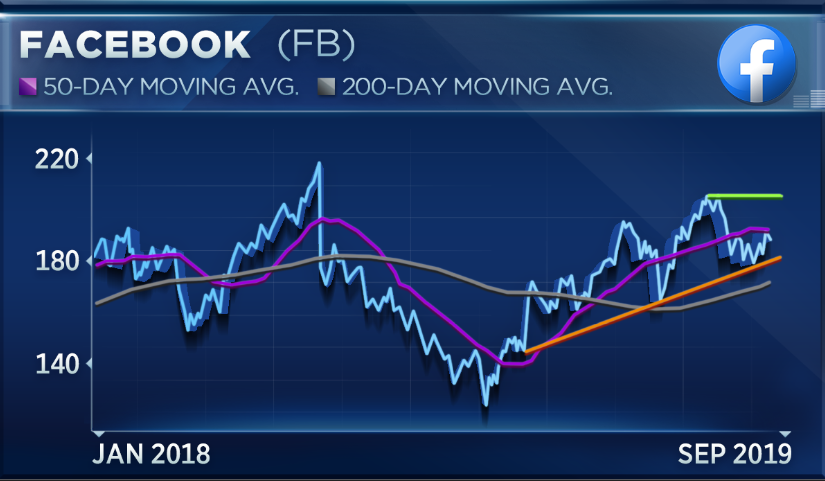 New York State Attorney Letitia James launched a joint investigation into potential antitrust violations on Friday, joining Florida, Iowa, and Colorado among others in putting the heat on Facebook. The latest probe comes on top of an investigation by the Federal Trade Commission.

“We’re still friendly toward the shares,” Johnson said on CNBC’s “Trading Nation” on Friday. “When you look at this chart, we’re still making a series of higher highs and higher lows coming off the December lows, and we’re moving right up toward that 50-day moving average at $191.”

Facebook touched the 50-day moving average on Thursday, but dipped lower Friday. It has not traded above that trend line since early August.

“Any sort of move above that $191 level sets the stock up to move back toward the $204 or $205 range which I do think is a logical place to go. So, we would continue to be a buyer here of Facebook shares,” said Johnson.

“Facebook, even despite all of this news, is still trading at a premium in terms of forward PE relative to the industry, and so I don’t know that it’s necessarily pricing in the risk that some of these probes present to Facebook,” Sanchez said on the same segment.

“These probes don’t go away. If anything, I think that risk continues to grow,” said Sanchez. “At the end of the day, we continue to grapple with whether or not companies like this should even be run for profit or are they simply just a commodity and a utility that really isn’t going to make growth kinds of returns.”