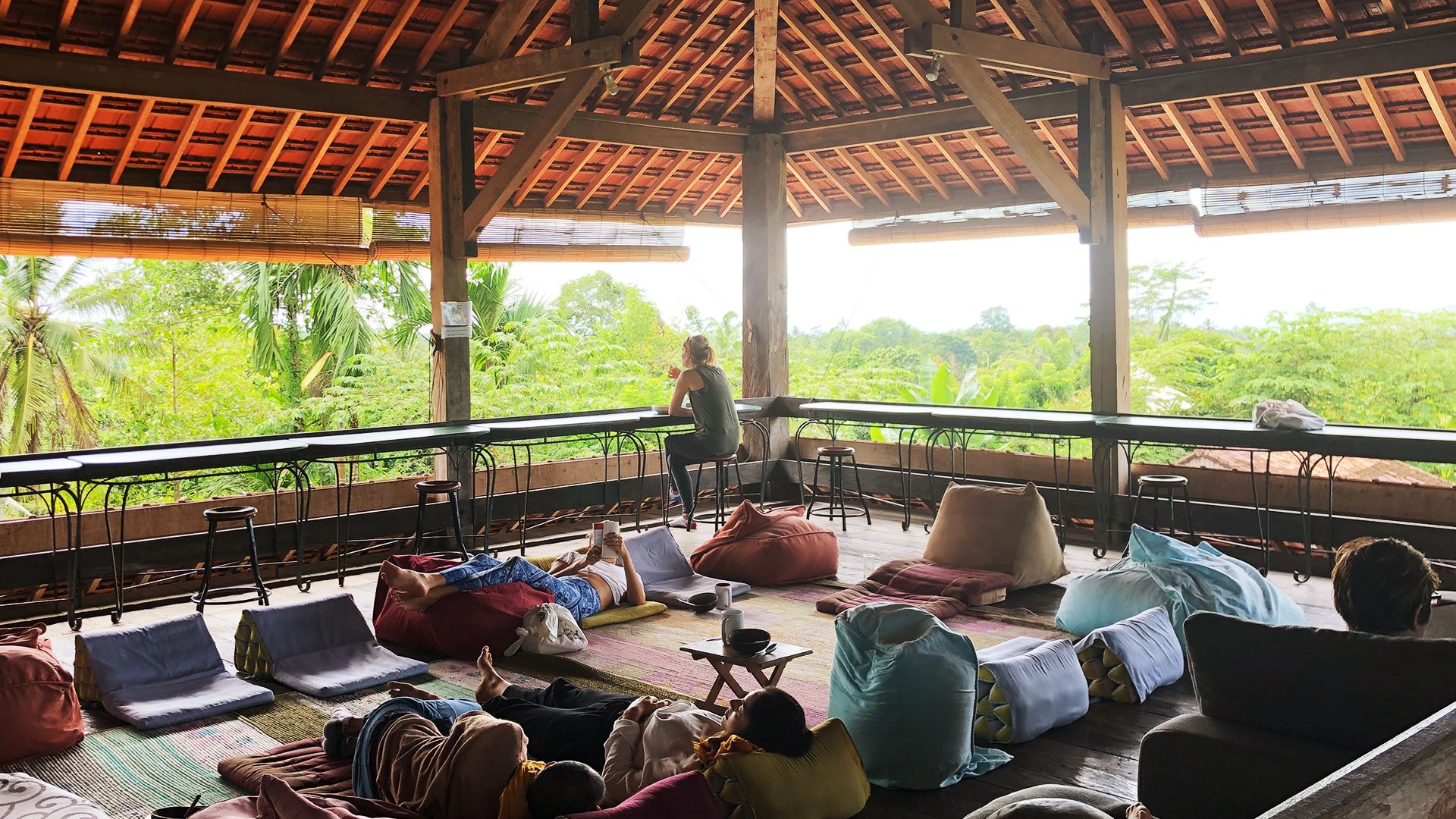 There are two rules at the Bali Silent Retreat: resist using any technology and no talking is allowed.

It might not sound too challenging to do, but in today’s hyper-connected world, I cringed at the idea of attempting three days — or 72 hours — of total silence where I’d be able to do nothing more than eat, sleep, read or just sit and stare into nearby rice fields.

It was an ambitious feat for someone who often avoids viewing the data shown on my iPhone’s Screen Time — the feature Apple rolled out which shows the amount of time spent on a phone in an effort to help curb user addiction to technology.

Google’s Android has also rolled out a similar feature.

Guests at Bali Silent Retreat in Indonesia are asked to refrain from any technology use.

We’re using our phones a lot.

Just take a look at what passengers are doing as they wait to board a bus or train in nearly any city. Perhaps it’s no surprise that a Nielsen study found that U.S. adults spend 10 hours and 30 minutes each day interacting with media.

The rise in tech usage has given way to a new billion-dollar mindfulness industry – which includes things from festivals with yoga and sober silent raves, to meditation apps like Calm and Headspace.

“Technology can be used as a force for good, but I’m not sure that we’re using it correctly at the moment,” Rich Pierson, co-founder and CEO of Headspace told CNBC.

“Smoking wasn’t a weird thing back in the day,” he said. “We may look back at our kind of smartphone usage and how we’ve used technology in the same way that we kind of potentially looked at smoking.”

Yet, it’s perhaps ironic that Pierson’s solution to unplug is on an app on the mobile device.

“The phone is just a piece of metal, plastic and glass,” he said. “So, if it’s sitting on the table, it’s actually doing nothing to you. It’s just sitting there, it’s an object. But our relationship to it, I think, is not quite right.”

Pierson said he hopes meditation will become a regular habit to people, just like brushing teeth every morning is.

While his proposed solution is to spend a few minutes each day to unplug, what would a more extreme version — like cutting out technology for three straight days — do for me?

Here’s how my retreat went:

Day 1
I instinctively kept reaching for my phone on impulse, and wanted to take pictures of a nice rice field at sunset or before indulging in a meal.

I also had a strong urge to constantly search things on Google that came to mind, like, “What is the population of Indonesia?”

Yet, I had to sit without knowing — and move on to a new thought instead.

I began to miss interacting with people and listening to music. I’m the type of person who regularly has headphones on and is listening to music or a podcast. The lack of constant sound and stimulation was hard to manage.

At night, I had a hard time falling asleep. Usually, you can reach for your phone and watch digital videos, scroll through a feed, or even use a meditation app that could help you fall asleep. In this case, I couldn’t. And the lack of technology made it harder to fall asleep in that moment.

Day 3
The final day was certainly the most challenging.

Overall, I didn’t miss the phone as a calling device, but I did find myself missing the things it provided: music, information and connecting with people.

After the retreat, I felt more relaxed and even more present in conversations. But within a few weeks, my phone habits and screen time reverted to where I was before, and I fell back in the habit of too much swiping, liking, and posting.

The experience was an effective way to unplug for a relatively long period.

It could even be likened to how some might occasionally do a nutritional detox in their diet. I think a digital detox could serve the same purpose.