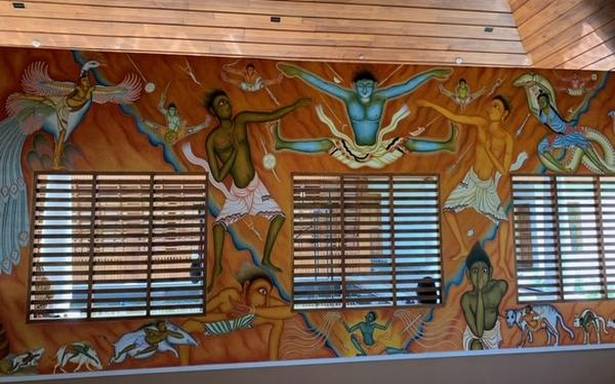 Folklore, rituals, myths, kalaripayattu, theyyam, padayani, mohiniyattam and more come alive on the walls of the new Centre for Performing Arts at Varkala, about 42 kilometres from Thiruvananthapuram in Kerala.“The idea was to capture the evolution of Kerala’s cultural heritage of performance arts — from folk arts to thiruvathirakali, theyyam, thira and padayani to semi-classical forms and then to classical art forms,” explains auteur Adoor Gopalakrishnan, chief advisor of the project.During the lockdown when most people in Kerala stayed at home on account of the pandemic, a team of eight artists led by renowned mural artist Suresh Muthukulam were hard at work on the premises of CPA, also known as Rangakala Kendram.

Suresh was briefed by Adoor on the aims of CPA and the art forms it proposes to popularise, preserve and showcase. Suresh made elaborate sketches of the works and got them approved by Adoor. Rangakala Kendram, an initiative of Vision Kerala Varkala Infrastructure Development Corporation (VIVID), is located on a two-acre plot on the premises of the government guest house in the coastal town of Varkala.“It is an emerging tourist destination and we felt the CPA would enhance the potential of the place. We also aim at trying to get kalaripayattu recognised as an intangible oral heritage by UNESCO. We are trying to bring under one roof all the art forms of Kerala, including tribal art forms,” said V Ramachandran Potty, managing director, VIVID. He explains that the CPA, designed by architect B Sudhir, has already been approached by 60 art students from different universities in India for research into the different performing arts of Kerala.

“I studied the location of the building and its surroundings before conceptualising and making my sketches. The place is full of Ezhilam Pala trees (Alstonia scholaris) — celebrated in verse and song in Malayalam — a 150-year-old pond and a sacred grove. It is a lively ecosystem filled with bats, birds, owls, porcupines and civets. I was inspired by the flora and fauna on the site,” says Suresh.He explains that, traditionally, murals in Kerala focus on thematic ideas from Hindu mythology. Although many artists have now begun working on new themes to keep in touch with the change in times, Suresh feels such an elaborate work in the mural style of painting, is rare. Moreover, murals are usually found inside palaces, temples and churches. “I myself have done some new concepts for private collectors.This is perhaps the first time that such a comprehensive work on the art and culture of Kerala has been done in the mural style,” says Suresh.The paintings adorn the main entrance, interior and exterior walls of the kalari thara (where kalaripayattu is taught) and the mallika (upper floor) on one of the buildings.“I did all the sketches and my students filled in the colours. In this case, we used acrylics since the works are on ordinary cement walls. Murals in its true sense are painted on specially prepared walls and natural materials are used to give colour to the murals,” explains Suresh.

An alumnus of the first batch of The Institute of Mural Painting in Guruvayoor and a disciple of the legendary Mammiyoor Krishnankutty, Suresh explains that he studied various postures in kalaripayattu before transforming it artistically. He has also delved into the myths involving the origins of kalari. “While the Northern school in Kerala consider Parshurama as their preceptor, in the Southern school, that place is accorded to sage Agastya. I have depicted both those beliefs,” says Suresh. Adoor explains that the postures and stances in kalaripayattu were inspired and derived from the movements of animals and birds. “These have been artistically and aesthetically interpreted by Suresh,” points out Adoor.In the malika, the artists have drawn the 108 karanas (brief movement phrases) of Indian classical dance. The leading theyyams of Malabar, complete with elaborate headgear, costume and facial make-up, gaze at visitors. Drawing inspiration from the surroundings, one significant work outside the kalari thara shows a theyyam artiste gazing at his reflection in the pool.While the paintings inside the kalari, the entrance and the malika are a burst of warm earthy colours, the paintings on the walls outside the kalari thara are in austere black and white. He says that Adoor’s keen involvement in the project was evident in the way he even visualised the colours of the works.“The lockdown actually helped us. We would begin work at 6 am and go on till about 8 pm. We were engrossed in our work and there was nothing to disturb us. So we were able to complete the work in three months,” he says. In all, about 2,000 square feet have been painted with murals, the biggest work being inside the kalari thara.“This centre holds a lot of promise for the study and preservation of Kerala’s cultural art forms and, eventually, we hope to develop two museums, including one devoted to tribal arts and an art gallery,” says Adoor. 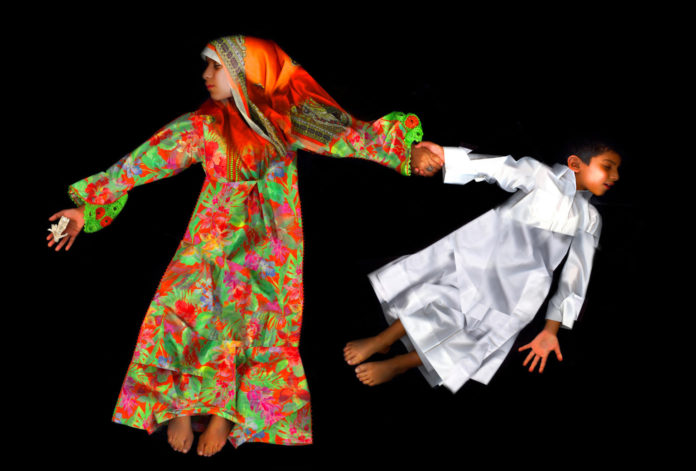