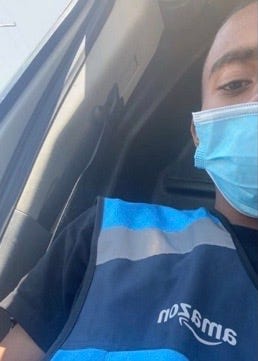 Frank Witsil
Detroit Free PressPublished 1:44 AM EDT Jul 2, 2020In a tweet that has gone viral, a 22-year-old Amazon driver said he quit Monday, walking off the job and abandoning his delivery truck at a gas station in a Detroit neighborhood.So much for the Amazon smile.”I didn’t think it would get over 10 million interactions,” Derick Lancaster told the Free Press, part of the USA TODAY Network. “I thought it was going to get more like 50 ‘likes’ and 20 retweets — and call it a day.” Lancaster tweeted that he “quit amazon,” adding that he left the van at the gas station and “it’s full of gas wit the keys in the IGNITION.”The tweet struck a chord with many people.In fact, he said, he’s gotten Twitter messages from folks telling him he inspired them to quit, too. But, he added, that wasn’t what he expected, nor was it the reason he took to Twitter.”This does not reflect the high standards we have for delivery partners,” Amazon said in an email to the Free Press. “We are taking this matter seriously, and have investigated the matter and are taking appropriate action.”Among the grievances that led Lancaster to quit: He said he was late getting to his sister’s recent graduation party because he was working, and he felt constant pressure to deliver more packages — and to do it faster. Pay conditions: Amazon workers go back to pre-coronavirus pay, with cuts to hourly pay raiseLancaster said after he left the van, he called a Lyft and went home, until he came to his senses hours later and returned to the gas station and waited for someone from Amazon to pick up the van.He also got back on Twitter and posted a live video about why his job and mental health wasn’t worth $15.50 an hour.Since the pandemic began, Amazon workers nationwide have called out sick in protest and held rallies to raise awareness about what they say are unsafe and harsh working conditions.And as pandemic fears — and package volumes — increased, delivery companies have struggled to keep pace.In April, employees of a metro Detroit Amazon fulfillment center, where three people have tested positive for COVID-19, walked off the job. They said they wanted the Romulus warehouse to be shut down for a thorough cleaning.This weekend, protesters marched outside a home of Amazon founder Jeff Bezos.At 8:39 p.m., Lancaster posted a 13-minute, profane video, explaining why he walked off the job. He said he was waking up at 9 and 9:15 a.m. and working until 9 or 10, after delivering 200 packages.And then he’d, go to sleep, wake up and do it again.Lancaster’s video is a stark contrast to the feel-good worker-vignettes that the company has been airing as TV commercials.Lancaster said later in a separate video he sent to the Free Press on Wednesday afternoon that he regrets posting his dramatic departure on social media because it probably will hurt his future job prospects, but not quitting.Follow Frank Witsil on Twitter: @fwitsil.