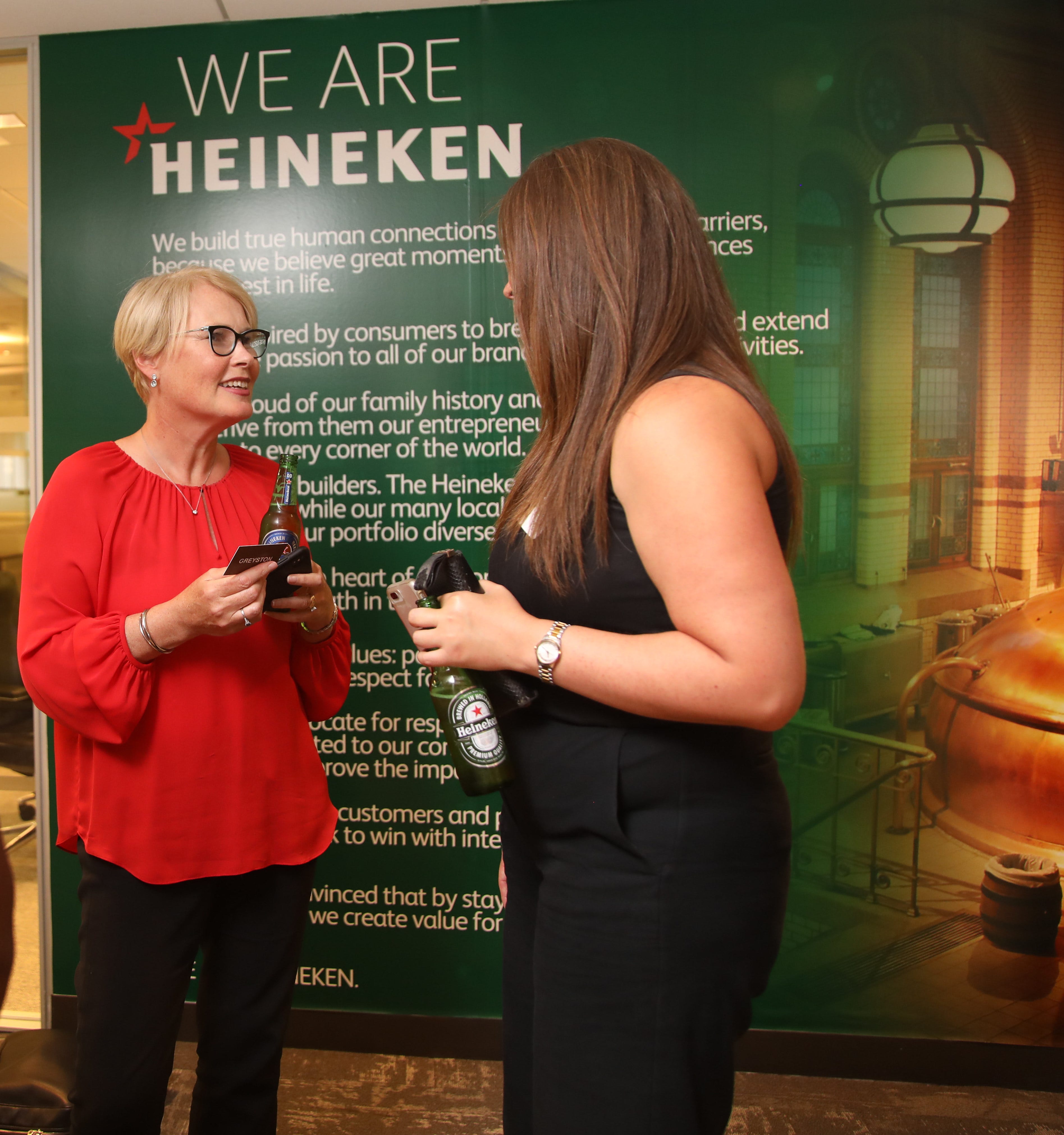 WHITE PLAINS, N.Y. – On a recent Thursday, Maggie Timoney, CEO of Heineken USA, got behind an expansive, fully stocked bar in the company’s headquarters in White Plains.

The bar showcased almost all of the offerings of the world’s second-largest beer company including  Amstel Light, Dos Equis, Mexico’s Tecate and, of course, the eponymous Heineken. Trays with guacamole and chips sat on countertops, a jukebox stood in the corner and bicycles with flower baskets offered a reminder of the company’s Amsterdam origins.

It was about 6 p.m., and employees, beer in hand, were milling about during their weekly “happy hour” in a large and open, sun-filled space with a floating staircase across from the bar.

As they enjoyed the company’s various brews, Timoney, who made history last September when she became the first woman to get the top job at a major American beer company, briefly greeted the revelers and talked about her vision to become the most innovative beverage company in the U.S.

It was perhaps no coincidence that Timoney was holding a bottle of Heineken 0.0.

The non-alcoholic beer, which was introduced earlier this year in the U.S., has been one of the biggest growth drivers for Heineken, according to earnings reports released this week for the first half of 2019.

Guns at retail: Walmart not banning gun sales in wake of mass shooting, but advocates say it should

As overall beer consumption in the U.S. has slowly diminished, more and more of the beer companies are diversifying their portfolios with craft beer, cider, non-alcoholic beer and even cannabis-infused drinks.

Beer consumption dropped globally to 47.5 billion gallons in 2018, down 2.2% from the year prior, according to the IWSR Drinks Market Analysis.

Those segments of the beer industry that performed well in 2018 included craft beer offerings, Mexican lagers, and brews perceived as healthy, an IWSR analysis found. The beverage-market analyzer also predicts that non-alcoholic beer, whether it contains cannabis or not, will continue to resonate with consumers. Wellness beers, aimed at athletes, are also rising in popularity, according to the report.

“It’s only 69 calories,” said Timoney, offering a reporter a bottle of Heineken 0.0, as she stopped for a brief chat. “I love it.”

Timoney was born and raised in Ireland. She came to the U.S. to study at Iona College in New Rochelle on a basketball scholarship and she received both a bachelor’s degree (1989) and an MBA (1992). Timoney joined Heineken in 1998 and rose to the role of director of Heineken Canada in 2006. In 2010, she was appointed senior vice president of human resources. Before she took over as CEO of Heineken USA, she served as CEO of Heineken Ireland.

Here’s what else Timoney had to say about herself and her vision for the company.

“I think innovating not only in what we do, but also how we do it, whether it’s human resources, finance or IT or any of our other functions” is important. “Beer is under some pressure, so we are also innovating in beer with different products.”

While at Iona, Timoney, a four-year standout for the Lady Gaels, was inducted into the college’s Goal Club Hall of Fame in 2001 as “one of the greatest women’s basketball players in the history of the program.”

“I think the main lesson is that it’s not about you, irrespective of what the team might think,” said Timoney. “But it’s really about the team and the impact that the team can have on the business.”

Advice for girls pursuing a career in business

“I always say no matter who you are, male or female, ensure that you are true to who you are and be yourself and don’t try to be something that you’re not.”

She has teenage boys. What she hopes they’ve learned from her

“As a mom, I would hope they would say they would like to see their mother more, because you know, we have a very busy job here,” said Timoney. “I think what they learned from me is just hard work and perseverance and adaptability of no matter where you move to what country, what city, what town you move to, just to be very flexible and adaptable in integrating very quickly. That’s probably the biggest lesson there.”

Of seeing mom in a leadership position

“I hopefully have raised them not to be discriminatory but also just not to almost even see male or female, but just to see the person doing a good job.”

Work-life: ‘The two do blend’

“I think work-life balance is almost a myth. I think what I strive to do is that when I’m at home, I’m fully engaged and present at home. And when I’m at work, I’m fully engaged in presence at work. I think the two do blend,” said Timoney. “I’m blessed to work for a family-owned company that has family values and that respects the work-life balance. So I’m very fortunate in that regard.”

A family on the move

Timoney’s family (her husband, Glenn, is a physical therapist) has moved to wherever her job has taken her: from the U.S to Amsterdam to Canada to Ireland and back to the U.S. “I like to say, my kids were born in Amsterdam and raised by the world,” Timoney said.

Swapna Venugopal Ramaswamy covers women and power for the USA Today Network Northeast. Write to her at svenugop@lohud.co

Poppin’ a top?: Make your choice from this list of the best US beers

Craft beer: With growth comes wild flavors with brews made of candy, pickles and … steak?

Everyone can apply starting later this month
The best no annual fee credit cards of 2019: Reviewed
To Top
error: Content is protected !!
Top