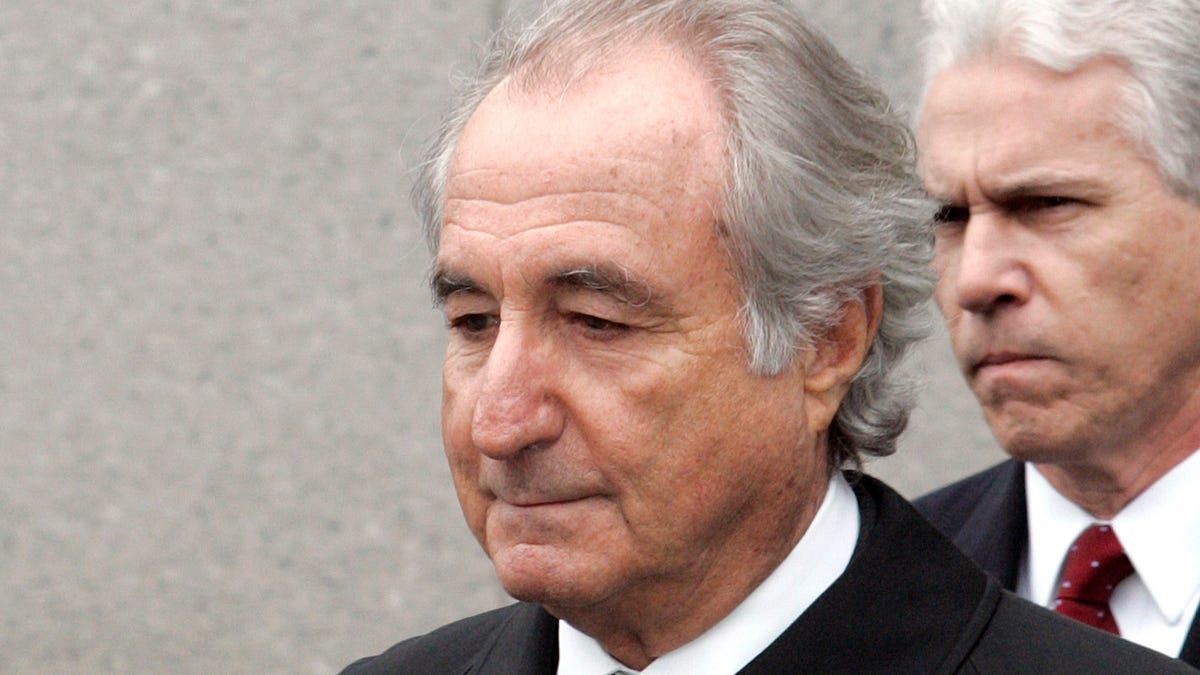 Bernie Madoff, Ponzi scheme leader, dies in prisonBernie Madoff, Ponzi scheme leader, was sentenced to 150 years in jail.Staff video, USA TODAYNEW YORK – Bernie Madoff, the financier who pleaded guilty to orchestrating the largest Ponzi scheme in history, died Wednesday in federal prison.The federal Bureau of Prisons confirmed that Madoff, 82, died of natural causes early Wednesday. Bureau of Prisons spokeswoman Kristie Breshears said Madoff’s family was notified of his passing at the agency’s medical facility in Butner, North Carolina.Madoff admitted in 2009 to swindling thousands of clients out of billions of dollars in investments over decades. They reportedly included the likes of baseball legend Sandy Koufax, Hollywood titan Jeffrey Katzenberg, actor Kevin Bacon and actor John Malkovich.“His life has ended, but his larcenous legacy has been indelibly etched in investment lore,” said Sam Stovall, author of “The Seven Rules of Wall Street” and chief investment strategist at CFRA Research.Who was Bernie Madoff?: Who did his ponzi scheme impact and how did he get caught? Your questions, answeredRemote work trends: As COVID-19 wanes, employees want more from work, including child care and flexibilityA court-appointed trustee has recovered more than $13 billion of an estimated $17.5 billion that investors put into Madoff’s business. At the time of Madoff’s arrest, fake account statements were telling clients they had holdings worth $60 billion.Madoff, a former Nasdaq stock market chairman from New York City, ran a decadeslong scam that gave celebrities, charities, financial funds and ordinary investors lucrative, eerily steady returns on their investments.Income poured in, making Madoff and his family rich. His upscale lifestyle included a Manhattan condo, an oceanfront home in Montauk, New York, on Long Island’s East End, a vacation home on Nantucket in Massachusetts, and a three-bedroom vacation apartment in the south of France.But Madoff masterminded a classic Ponzi scheme, one in which money from more recent investors went to pay earlier investors. The scam collapsed in December 2008, when Madoff’s businesses could not cover the growing withdrawal requests from investors who sought money amid the Great Recession.For many of those who’d previously trusted and even revered Madoff, the collapse wiped out their life savings and retirement plans. Some had to seek new jobs or move in with friends and relatives.For Madoff, the beginning of the end came when he confessed the truth to his sons, Mark and Andrew. They notified federal authorities, who arrested Madoff.He pleaded guilty in 2009 and insisted that he alone ran the Ponzi scheme and masterminded decades of lies. Federal judge Denny Chin sentenced him to 150 years in prison, a true lifetime term more typical of the sentences imposed on the worst mobsters and violent criminals.”One hundred and fifty years made me feel really good that for the first time, the government came down on our side and did the right thing,” said Michael DeVita, a Madoff investor from Chalfont, Pennsylvania, after Chin handed down the sentence.Five former Madoff employees were convicted in 2014 on charges of aiding the massive scam. In that case, a sixth former employee served as the government’s chief witness after confessing his own involvement.Madoff spent most of his sentence at a federal prison and medical center in Butner, North Carolina, as inmate register number 61727-054. His fellow inmates included the late Sheik Omar Abdel-Rahman, who was convicted in a 1990s terror plot to bomb the World Trade Center and landmarks around New York City.By early 2020, Madoff was confined to a wheelchair. He was suffering shortness of breath that required him to be hooked up to oxygen at night. And he had cardiovascular disease, according to his attorney, Brandon Sample.Madoff’s lawyers filed court papers last year to try to get him released from prison in the COVID-19 pandemic, saying he had suffered from end-stage renal disease and other chronic medical conditions. The request was denied.Madoff was admitted to a comfort care unit at the prison in July 2019. After initially refusing dialysis, the blood-filtering procedure commonly prescribed for kidney-failure patients, he agreed to start the treatment in December, the court filing said.  While stressing that Madoff doesn’t dispute “the severity of his crimes” or “seek to minimize the suffering of his victims,” Sample argued the convicted scammer’s conditions met the guidelines for compassionate release.The court said no. Contributing: Michael Balsamo of the AP and Kevin Johnson of USA TODAY

Construction on College Hill Sleepy Bee Cafe to begin by May
Searching for a home? These are the top 20 U.S. housing markets
To Top
error: Content is protected !!
Top