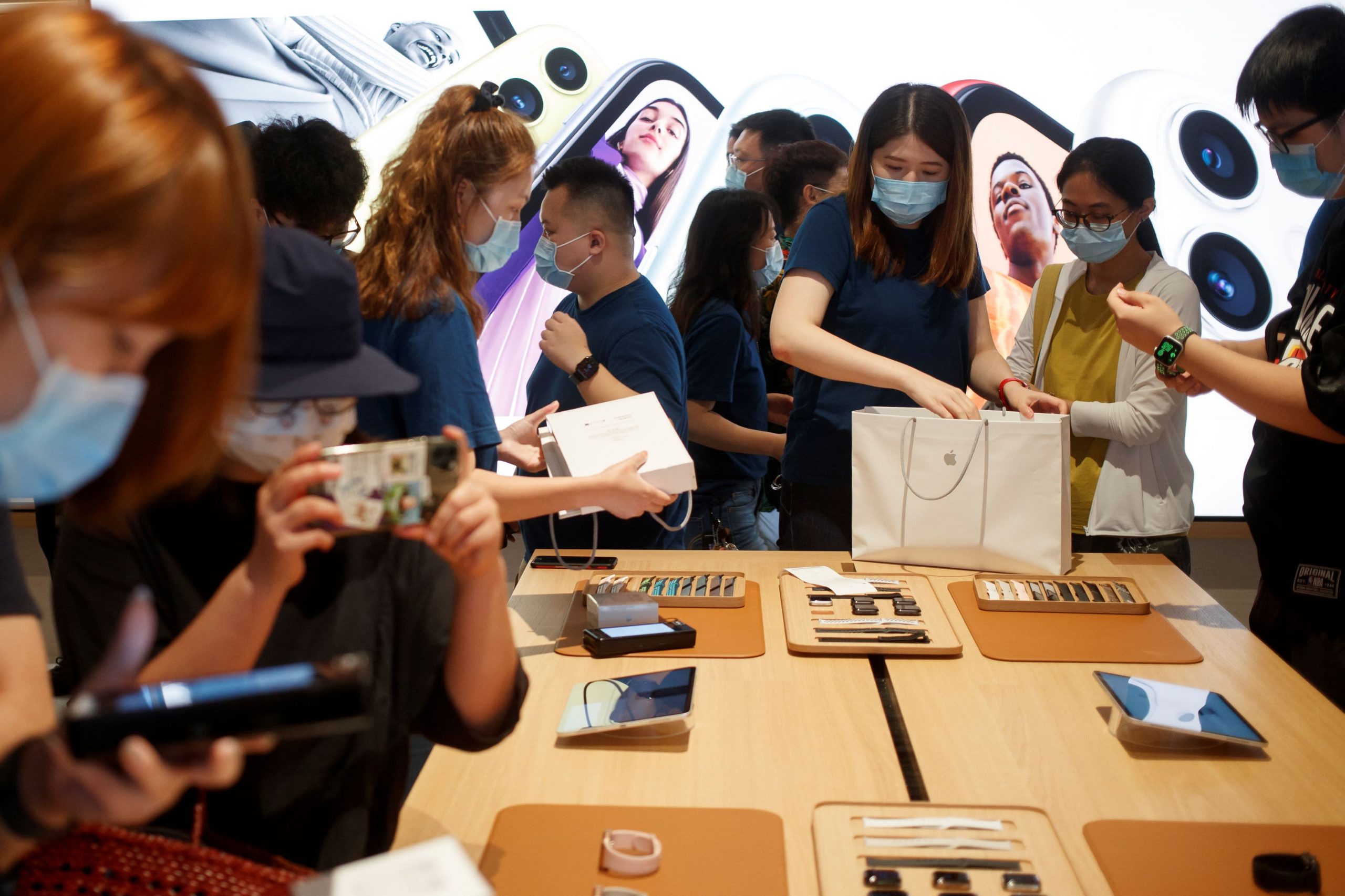 People purchase Apple products in the new Apple flagship store on its opening day following an outbreak of the coronavirus disease (COVID-19) in Sanlitun in Beijing, China, July 17, 2020.Thomas Peter | ReutersBEIJING — New data show the extent to which Chinese people went online in the wake of the coronavirus pandemic and adopted new habits, such as shopping through video livestreams.By the end of 2020, China had 989 million internet users, according to figures released Wednesday by government agency China Internet Network Information Center (CNNIC).That’s up by 85.4 million from March, just after the worst of the coronavirus outbreak in China that forced hundreds of millions of Chinese people to spend more time indoors.For a sense of the scale of China’s nearly 1 billion-large internet population, its lead over India’s estimated 639 million internet users is 350 million, which is bigger than the entire U.S. population.The government report also showed how, after the worst of the outbreak in China was over by April, some online trends stuck, while others didn’t.The report said that between March and the end of the year 72.15 million more people were shopping online, predominantly on mobile phones, reaching 782 million.More people also had more money to spend — and were increasingly working from home.The report said the proportion of internet users with a monthly income of at least 5,001 yuan ($774) rose to 29.3% in December, up from 27.6% in March.The number of people working remotely climbed by 147 million from June to 346 million as of December — about a third of the country’s internet users.More people watch short videos than shop onlineAs significant the growth was in online shoppers, video watching jumped even more — by 76.33 million over nine months — to 927 million in December.That means nearly 94% of all Chinese internet users watched online videos, far more than the 79% who shopped online.Short video users alone climbed by 100 million from March to 873 million at the end of the year.Livestreaming e-commerce users also surged, up by 123 million from March to 388 million in December. About two-thirds of these users have made a purchase while watching a livestream, the report said.Online health care users dropWhile learning and getting health consultations online saw significant growth during the coronavirus outbreak, usage dropped by December.Online education users stood at 342 million, down by 81.25 million from March’s 423 million total.Online health-care users fell to 215 million, down from the 276 million the agency had reported for June. March figures were not available.Wednesday’s report did note that online health care’s penetration in less developed parts of China increased from June to about one-fifth in December.

Elon Musk says he’s a supporter of bitcoin and thinks it will get ‘broad acceptance’ in finance
Kuaishou shares rise nearly 200% in $5.3 billion Hong Kong debut
To Top
error: Content is protected !!
Top